Not Really Marxism And Not Really Fascism But Something Far Worse

The great political and cultural struggle in the 20th century, as the story goes, was a three way battle between Fascism, represented by National Socialist Germany, Fascist Italy and to an extent imperial Japan versus Communism, consisting mostly of the Soviet Union and Red China, versus liberal democracy embodied by the United States and our vassal states in Western Europe. The Fascist/Communist alliance came apart quickly as the two movements were incompatible, leading to a shaky Democracy/Communist alliance that combined to defeat Fascism and then just as quickly it devolved into the Democracy vs Communism struggle known as the Cold War from 1945 to 1989 when the Berlin Wall fell and the Soviet Union followed close behind leaving China as the sole (overt) Communist power in the world. 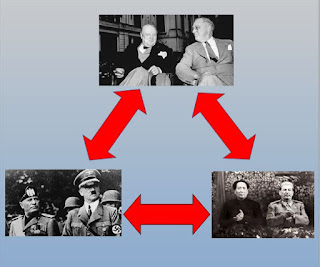 But when you look at per capita GDP? The U.S. is 5th behind four European nations with a per capita GDP of $65,000 but China is way down the list:

Somewhere around a billion people are in abject poverty in China while the state runs businesses that have hundreds of thousands of employees and billions in revenue. A small group of people get very rich with the blessing of the Communist Party. The rest? Not so much.

With a tiny number of incredibly wealthy oligarchs, a small middle class and around a billion poor people who are little more than slave labor for the state, this is the vision the architects of the Great Reset have for the entire world and especially the West. The vast majority of people crammed into our cities living at a subsistence level but being provided with modern bread and circuses in the form of streaming entertainment and "free" food, eking out an existence while the wealthiest among us get richer and with a technocratic Mandarin class acting as a thin buffer between the ultra-wealthy and the desperately poor. They are counting on delivery Taco Bell, crappy Netflix shows and legal pot to keep the population in check. They are probably right.
Those who step outside of the lines and buck the plan? They are getting stomped with an iron boot. The online troll who went by Ricky Vaughn is being criminally prosecuted for sharing memes. Yes, you read that right.
He might go to jail because of memes.
Gun control is at the top of their agenda to keep the peasants from sticking their heads on spikes. Likewise the incoming Patriot Act 2.0 which will follow the inevitable false flag attack that will drastically expand government surveillance with the added bonus of corporate America acting as snitches and informants for the government. Think that won't happen? It already is.
If "Facebook Is Private", Why Are They Feeding Users' Private Messages Directly To The FBI?
Despite decrying censorship when it was happening to them last year, when Donald Trump was banned from Twitter and Facebook earlier this month, the left praised the move by big tech. “Facebook is a private company and can do what they want,” the pro-censorship hypocritical crowd chanted ad nauseum through the digital ether after bad orange man was silenced. But as we have said time and again, Facebook being private is simply not true.
Now, however, Facebook has made an unscrupulous Faustian bargain with the federal government which should eliminate all doubt once and for all. They are now willfully handing over private messages of Trump supporters who talked about the events at the capitol on January 6.
Social media is the government spying on you and censoring thought without having to go through the hassle of following the Constitution. The best part? You give them the right and the means to repress you voluntarily and make is easier for your neighbor to snitch. The East German commie Stasi couldn't have dreamed of a better system.
Yes, the antifa/black Lives Matter movement is a Marxist front so it is appropriate to use that language to describe them but it is critical to understand that there are two forms of Leftist ideology in America and anti/bLM is only the visible, openly violent form (more on this in a future post).
What we need to start to wrap our minds around is that the struggle we are in now isn't the same struggle from the 20th century. While many of the players are the same and the goal of global domination remains the same, the means, philosophy and rhetoric have changed. We need to fight the enemy as they are now, not as they were last century.
We aren't up against Soviet style Communism and we certainly are not dealing with fascism. This is a new war with the same enemy but this time they have found what appears to be a winning formula and the number of people standing up to them is shrinking.
First and foremost, you must know your enemy to fight them.
Posted by Arthur Sido at 10:47 AM