Astute readers of this blog, and let's be honest that all of my readers are astute, will recall that one of the ideas being floated for the "Great Reset" is the elimination of income taxes and replacing that revenue with "taxes on land value". 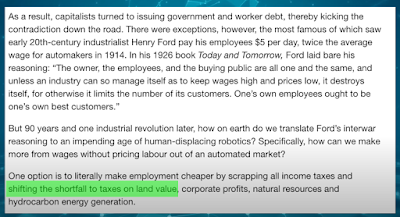 As I wrote:
THAT got my attention. We are pretty solidly middle class, having gone from being a mid-level professional in financial services to several years of scraping by to finally being in a decent place financially. We have a nice sized house, older and out in the country, and live on four acres. Our property taxes are pretty low relative to many other places in the country. The proposal above? That would likely be enough to force us off of our land and into some shitty apartment in the city where we would be far more dependent on the government and of course on maintaining our social credit score so we don't get cut off from services. I have a garden and we raise our own livestock now, not to provide all of our food needs but certainly to provide a significant chunk and a sense of being somewhere self-reliant. That cannot be allowed, any sense of self-reliance means less reliance on the corporate-state monolith. Self-reliant people are untrustworthy and harder to control so they will just tax us off of our land.
If there is anything they can't stand, it is people who are not totally dependent on the system.
The plan would seem to be designed to tax people off the land, forcing them to sell out and move into the increasingly violent cities.
You might have wondered what would happen to all of this land when people are taxed off of it. A whole bunch of America is pretty empty. For example, this is a satellite view of Arthur, Nebraska.... 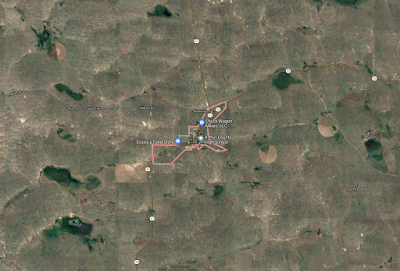 Arthur, Nebraska is a town of just over 100 people and it is the county seat of Arthur County, Nebraska with a population of 465. Arthur County is about 718 square miles for a population density of just over .6 people per square mile. Apparently back in 1920 there were 1,412 people in Arthur County, in 1950 there were 803 people and by 1980 in was down to 513 before shrinking to it's current estimate population of 465. I have always kind of had a fondness for Arthur County, for obvious reasons, and thought it might be a good place to ride out a SHTF situation. It isn't the least populated county in the continental U.S., that honor goes to Loving County in Texas with 169 people spread out over 677 square miles, meaning a population density of .2/square mile. Anyway, back to my point.
So what happens to all of this land when the current owners are taxed off of it? Why the oligarchs buy it of course! They aren't even waiting for the Great Reset to take hold, the wealthiest people in America are already snatching up huge tracts of land.

Well known farmer Bill Gates suddenly appeared on the lists of largest owners of farmland with a paltry little starter farm, a measly....
242,000 acres of farmland
Primo farm ground goes for, let's say $8000/acre, so that makes his farmland holdings worth around just shy of....
$2,000,000,000
Two billion bucks worth of farm ground. That puts li'l Bill and his evil lovely wife Melinda in a category all by themselves according to Forbes magazine, the periodical of choice for people who want to be oligarchs....
America’s Biggest Owner Of Farmland Is Now Bill Gates
He doesn't own one big chunk of farm ground, rather his holdings are spread way out according to The Land Report: 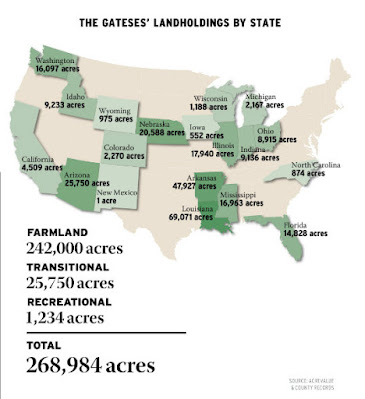 I would guess that in many of those states, Bill is the largest landowner in the state. Gates isn't the only billionaire snatching up huge tracts of land... 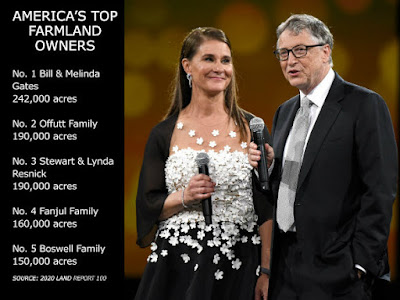 Why would a computer dork buy almost a quarter of a million acres of farm ground?
Because as the saying goes, they ain't making any more land.
Back in the day, landed gentry owned most of the land and peasants worked the land for a pittance. That was how it worked. It wasn't until fairly recently that people owned land of their own. At one time the U.S. was covered with small family farms but slowly over the years as agricultural practices grew more efficient and jobs in the city with regular hours and pay lured younger people away, the number of Americans involved in farming shrank even as fewer farmers fed a burgeoning population. Today the number and per capita percentage of people involved in farming is tiny. Not helping this situation is the ever increasing cost of farmland. Without careful succession planning, it is difficult for farms to stay in the family even as it remains very difficult to get younger people to pursue a career in production agriculture. Big farms snatch up smaller farms and get bigger and the cost of entry into agriculture skyrockets with each passing year in a vicious cycle. Rinse. Repeat.
With what appears a quiet move into owning huge tracts of land by billionaires, the barriers to entering the farming profession are getting worse. Who wants to be bidding on farm ground when some suit online is bidding against you with access to Bill Gates and his billions of dollars?
It isn't just farmland. Forbes also mentions that while Gates is the largest owner of farm ground, he is an amateur when it comes to owning land....
While Gates may be the country’s biggest farmland owner, he by no means is the largest individual landowner. In its list of 100 top American landowners, The Land Report gives the top spot to Liberty Media Chair John Malone, who owns 2.2 million acres of ranches and forests. CNN founder Ted Turner ranked number three with 2 million acres of ranch land across eight states. Even Amazon CEO Jeff Bezos is investing in land on a large scale, landing the 25th spot with his ownership of 420,000 acres, mainly in west Texas.
Gates comes in at number 49 on the list of the top 100 landowners in the U.S. A lot of familiar names are on the list: Jeff Bezos, Philip Anschutz, Ted Turner, Kochs, Kennedys, Hearsts. It turns out that the wealthiest among us like to own property because who doesn't want to own 2.2 million acres of ranches and forests?
To put this in perspective, John Malone owns 2,200,000 acres of land. There are 640 acres in one square miles so Malone owns 3,437 square miles. Delaware is about 1,900 square miles of land and Rhode Island is 1,033 square miles counting just land.
John Malone owns more land than the total area of the two smallest states combined.
Owning on a house an half an acre is considered to be a nice home. Owning a 500 acre farm is quite an accomplishment. Owning the equivalent of more than two entire states? That makes you into something quite different indeed. People on the Left think Orange Man Bad is their enemy but what about a guy who owns more land than two entire states?
Imagine the future 25 years from now. Most Americans have been forced off their land by increased property taxes while the wealthiest 1% of the top 1% keep buying more and more land, likely avoiding those taxes by designating parts of their property as ecological preserves. The "American" population is exploding as the third world flees to the refuge of America and Europe thanks to overpopulation and mass starvation, disease and war. America's farmland is worked by drone farm machinery. A handful of people own most of the land in the U.S. while 99.999% of Americans own nothing and live in public housing.
This is the vision of the architects of the Great Reset and it is coming to fruition right in front of us. Rich people can do whatever they want with their money but they also need to understand that the current of resentment and anger it generates can only be contained for so long. When things break loose, being wealthy isn't going to save them. History should have taught them this lesson but most people, even the very wealthy, never seem to learn those lessons.
Posted by Arthur Sido at 8:36 AM