A Cursory Study Of History Would Tell Them How This Ends

I started calling Alexandria Ocasio-Cortez the dumbest person ever elected to national office as soon as she was elected but I am not sure that was fair as it seems that Ilhan Omar is at least as dumb and probably even more so. Even if she is only the second dumbest person ever elected to national office, that still makes her pretty dumb and in some rather dubious company alongside Maxine Waters and Dan Quayle. What makes AOC even worse is that she harbors some pretty serious delusions of grandeur. She is completely lacking in the self-awareness to realize she is a 29 year old kid that was a tavern wench this time last year but has decided that as she has been elected as one of 435 representatives in the U.S. House, along with people like my congressman Jim Banks and guys like Iowa's Steve King, she is now "in charge" of America and you all better just shut up and listen to your betters. 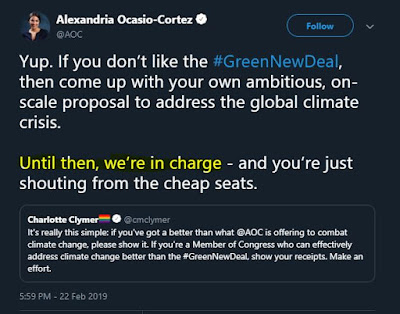 Notice that there is no room for questioning the very existence of man-made "climate change". You are obligated to either propose a sweeping "on-scale" seizure of the entire economic system of America to be remade in her image or you just shut the hell up. She is in charge. The "little people", in other words the American people, are just "shouting from the cheap seats". Then she doubled down by screeching that "I'm the boss"


Socialist on an ego-trip. How long before she puts on a uniform with a dozen medals? pic.twitter.com/bpVisJRzZy
— Jack Posobiec 🇺🇸 (@JackPosobiec) February 24, 2019


Any parent will recognize this as the rant of a petulant middle-school girl. Her voice is screechy and high pitched and she looks like she is about 30 seconds away from going to her room and slamming the door after screaming "I hate you!" at the American people. Or maybe holding her breath and rolling on the floor kicking and screaming until she turns blue in the face and/or passes out.

She is absolutely outraged at the nerve of people to not immediately let a barkeep with no experience running anything other than a beer tap suddenly declare herself the dictator for life of America. James Woods had a pretty solid response to her arrogant screeching:

So, you may have missed this, but the way it works in America is YOU work for US. The last time somebody told Americans to sit down and shut up was 1776. If you ever learn to read, look it up. You are not only a idiot, you’re an arrogant idiot, and there is nothing more dangerous https://t.co/5Hn8IoHFn8
— James Woods (@RealJamesWoods) February 23, 2019


You will recall that the Left often murmurs ominously about Trump being a wannabe dictator, a modern day Caesar just waiting to happen, but oddly enough it is loons on the Left that seem to be declaring themselves to be in charge of the entire nation based on being elected for just a single term so far by a handful of people in a section of New York.

In spite of all of the chatter from the progressives about egalitarianism and expanding the electorate, the reality is quite different. The Left only really wants people voting that vote the right way. All of the yammering about the unfairness of bedrock principles like the electoral college and the two Senate seats per state regardless of population is about their general disdain for the American system of government. The idea that plebs from Wyoming and Indiana get a say in the government sticks in their collective craws. They don't mind low-income and low-education minorities voting because they vote the proper way but those damnable working class Republicans voting as they see fit? How dare they!

What Ocasio-Cortez and her ilk want is a form of oligarchy where we are given the impression that we vote for our leaders but the truth is that we get to pick from only a select group of puppets selected and controlled by the oligarchy. I finally started reading Tucker Carlson's new book Ship of Fools and while it has been out since the beginning of October of last year, he was pretty prescient in seeing the attitude of Alexandia Ocasio-Cortez:

All your fears are real. You may have suspected our democracy was actually an oligarchy. Now you know for sure. You can vote all you want, but voting is a charade. Your leaders don’t care what you think. Shut up and obey.

Carlson, Tucker. Ship of Fools: How a Selfish Ruling Class Is Bringing America to the Brink of Revolution (p. 16). Free Press. Kindle Edition.

Shut up and obey or as AOC states: We're in charge, I'm the boss and you peasants are just shouting from the cheap seats. Pretty classist from a self-proclaimed democratic socialist.

My general sense of things is that the anger that led to the election of Donald Trump in 2016 has not abated in the least and if anything is rapidly ramping up. The last year was full of open assaults on traditional America from the endless Russia-collusion "investigation" that seeks to disenfranchise tens of millions of Americans to the Brett Kavanaugh confirmation hearings to the slander of the Covington Catholic kids to the obvious Jussie Smollett hoax. In many corners of the internet people are talking about civil war and are preparing for it. I don't think even the most ardent gun control advocate realizes the sheer volume of firearms and ammunition flowing into the hands of the general population in this country. If they could see the promotional emails I get every day from gun sellers, they would be terrified. Many Americans are in possession of not a deer rifle or maybe a hunting shotgun but a dozen or more firearms and hundreds or thousands of rounds of ammunition.

History is replete with examples of arrogant elites coming to a bad end. What is happening now is many traditional liberals as well as many traditional conservatives turning their focus and their ire toward the ruling elite. Jeff Bezos might think he is insulated from this anger but when the dam breaks there won't be any place for the billionaires to hide from the floodwaters. Living in a gated community with a couple of rent-a-cops will dissuade casual criminals but an angry crowd of hundreds? Do you think a rent-a-cop making $15/hour is going to die to protect some arrogant member of the home owner's association living in a million dollar house? They will more likely take off their fake badges and join the crowd.

Our nation is a giant powder keg and people like Alexandria Ocasio-Cortez arrogantly add power to the mix and keep lighting matches, never seeming to realize that they are at ground zero when the flames of resentment they keep stoking hit the powder and things go up. I suspect she will still be screaming about being in charge and telling the crowd that she is the boss when they tie the blindfold on her.