Last July we were treated to the spectacle of a Congolese woman clambering up the base of the Statue of Liberty to protest what a horrible country America is. You know, the America that gave her shelter when she fled from her fellow Congolese. The name of this ungrateful wretch is Therese Patricia Okoumou and I wrote about her last year: The Gratitude Is Heartwarming. In part I wrote:

So a Congolese woman flees a nation full of other Congolese people and leaves behind an incredibly violent and backward nation where murder and rape is common. She comes to the United States and even though we are under no obligation to do so, we welcome her in and she gets to become a citizen of the U.S.. She then spends the next ten years protesting against the nation that took her in and gave her shelter, breaking the law on at least three occasions that we know of during that time. Instead of being grateful to the nation that gave her shelter and provided her with the opportunity to be a personal trainer for Manhattan's elites, she instead spends her time telling us what we are doing wrong. I would imagine that most people saw right through her publicity stunt and are less than impressed.

As I wrote, ingratitude is such an ugly emotion but it is a common one. Immigrants in the late 19th and early 20th century seemed to love their new nation and were grateful for the opportunities afforded them. Many immigrants today, the ones who wave little American flags at their naturalization ceremonies, also seem quite grateful but an awful lot of them are not. They come to America and then promptly start bitching about the things they hate about America and about Americans. Of course they have the right to express their opinion but it seems like there is a huge disconnect when people who benefit enormously from the society built by Americans seem to loathe and hate those same Americans, while at the same time fleeing from their own people. I don't blame Ms. Okoumou for fleeing the Congo, between the civil war, primitive living conditions and the added bonus of ebola outbreaks periodically it sounds like a craphole of a country. It would just be nice if she didn't act superior to the people that built an actual, functioning society that she chose to live in.

She apparently didn't learn any gratitude the last time she was arrested because she just got arrested again, this time in Austin, Texas, for climbing the Southwest Key Building. 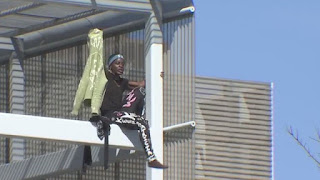 The latest bug up her butt is the "detention" of illegal alien kids. After she got down from the building, apparently jumping off the second floor, she was taken to the hospital to get checked out and then arrested. How awful we are that we provide medical care to idiots that climb up and then jump off buildings. I wonder what they do with law-breaking people in the Congo?

How much are we going to spend on law-enforcement and court costs to deal with this lady every time she decides to tell us what awful people we are?

From Do We Really Need These People? Congolese Lady Launches Another Anti-American Protest:

No self-respecting country, let alone a "superpower," would import people who not only bring nothing to the country, but actively hate the people who live here. Why isn't this woman deported? Why aren't foreigners who openly declare their hatred for the nation sent away? After all, Congo is no longer under the rule of Belgium, so why did she deliberately come here to live under the rule of the white people she evidently hates so much?

That sounds a little harsh but I don't think it is wrong. We are endlessly lectured about how diversity is our greatest strength but what exactly is it about Therese Patricia Okoumou that her presence in America, getting regularly arrested, that makes our nation stronger? How are we made stronger by having Somali ghettos in Minneapolis sending fools like Ilhan Omar to Congress? Just having more people that are not of white, European descent is not an immediate positive and it often is a negative. Our immigration policy should be entirely a function of strengthening our nation and benefiting the American people, not turning our nation into a giant couch where people from around the world can crash and then complain that we are out of Doritos.

The next time Therese Patricia Okoumou is arrested she should be stuck on the next flight to the Congo with a one-way ticket and be forced to surrender her U.S. passport. Maybe spending a few years among her fellow Congolese will remind her of how good she had it in America.
Posted by Arthur Sido at 10:41 AM