If It Weren’t For Hoax Hate Crimes….

…would there be any “hate crimes” at all?

The Left is scrambling to provide cover for Jussie Smollett. He needs mental health help, he has a drug problem, he was driven to it by Trump. Anything to distract people from the fact that the most high profile “hate crime” in recent history was a hoax. Trying to preserve the sanctity of “hate crimes” is critical for the Left because it is such an important faith affirming story in their religion. The lore of hate crimes is that “people of color”, religious minorities and sexual deviants are under constant threat of being attacked in the streets or at least having someone say something mean about them. Every time it turns out that one of these “hate crimes” is a hoax, and that happens a lot, it undermines their religion.  That is why we get stuff like this: 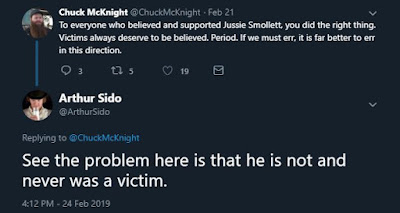 I sort of know Chuck McKnight, we were collaborators on a book, Simple Church: Unity Within Diversity, back in 2014 but clearly we have gone on very different trajectories politically.

Obviously that statement from Chuck is false. People who assumed that Jussie was telling the truth, even as his claim was so clearly ridiculous, did so because they believe the worst about their fellow Americans of a different political persuasion. If Chuck believed Jussie, he did so because he has convinced himself that America is full of roaming hordes of Trump supporters looking for homos to beat up. “Victims” don’t deserve to be believed because very often the “victims” are not victims at all. Christine Ford didn’t deserve to be believed because she wasn’t a victim. Jussie Smollett didn’t “deserve” to be believed because he was never a victim. People making credible claims of being the victim of a crime deserve due process and to be take seriously but they don’t deserve to be believed just because they say they were victimized. But to people like Chuck, anyone that fits the right profile (sexual deviant, minority, liberal woman) is automatically afforded absolute belief unless you can prove beyond any reason that they are lying. If a story of a white actor who claimed to be beaten up by two black men wearing Black Lives Matter t-shirts and screaming “This is Wakanda cracker!” were to hit the news, I very much doubt Chuck would demand they be believed. Whether you are given the benefit of belief based on a claim is entirely dependent on your identity.

We are supposed to accept that hoaxes like Jussie Smollett are not commonplace at all and that we should still believe “victims” without question but the reports keep coming out. Here is a new one just from this morning: Jackson gay rights leader accused of burning down own home. What appears to be a woman dressed as a man, Nikki Joly, is on trial for burning down her own home with five pets inside that perished. The police investigated and as is often the case the story broke down quickly. Why would this person burn down their own home? There is an answer to that:

Meanwhile, a police investigative report suggests a possible reason for the fire.

Two people who worked with Joly at St. Johns United Church of Christ, where the Jackson Pride Center was located, said he had been frustrated the controversy over gay rights had died down with the passage of the nondiscrimination law, according to the report.

The church officials, Barbara Shelton and Bobby James, when asked by police about a possible motive for the fire, said Joly was disappointed the Jackson Pride Parade and Festival, held five days before the blaze, hadn’t received more attention or protests.

Since the story got out they are now backtracking on their statements but that has the ring of truth to it. People like Ms. Joly are mentally ill and desperate for attention and when they don’t get enough, they act out like a small child that feels that mommy and daddy are ignoring them. Why do little kids do naughty stuff that they know they are going to get punished for? Because they crave attention more than they fear punishment. Jussie Smollett seems to be a similar story of a man who was desperate for attention and driven by hatred of President Trump and white people in general. The “church” mentioned above still managed to raise $58,000 and I doubt they will be sending that money back now that it is clear this is a hoax.

According to the story, it took 13 months for Ms. Joly to be charged. Thirteen months of wasting time and police resources. Thirteen months of work that could have been focused on actual crimes. But instead they were chasing down bogus leads even though it seems the police figured out who the real culprit was very early on. But even now, some people don’t believe it.

Some residents refuse to entertain the notion he could be guilty.

“There’s no path for me to believe it could ever be true,” said Elody Samuelson, a bisexual who raised money for Joly after the fire. “There’s no way he did it, not a bit, not a chance.”

Read that again. There is nothing that could be shown that would convince this individual that this was a hoax. They won’t believe it because they can’t believe it. Their whole religious outlook depends on stories like this being true so even in the face of overwhelming evidence, they refuse to believe it was a hoax. People like this put even the most ardent Christian fundamentalist to shame.

There are certainly actual “hate crimes”, or criminal acts motivated by racism or “homophobia” or antisemitism or whatever. But very often these cases are hoaxes and a this is well documented (here is a list of over 400 cases). That is why we should prosecute crimes of all kinds in the same manner: with due process, depending on evidence and with a presumption of innocence for the accused. That is the only way we can have a functioning justice system. When we arbitrarily demand that “victims” automatically be believed, it skews our justice system and upends the rule of law.

We should always rely on facts and evidence. Period.