America First Dies Without So Much As A Whimper

Trump is technically still in office for more than a month but the tattered remains of "From now on it's going to be America first" is already dead and forgotten. The rest of the Republican party that has been tepidly supporting Trump's America First rhetoric openly but doing zilch to advance the actual agenda is on record as going right back to business as usual, which means the actual American people and workers come last, multinational globalist corporations and the banksters come first, oh and time for more wars on behalf of Our Greatest Ally.
Exhibit A (scare quotes mine):
H.R.1044 - "Fairness" for High-Skilled Immigrants Act of 2020
As good rule of thumb: Any bill that talks about "fairness" is anything but fair, just like "patriot" in a bill is always the opposite of actual patriotism.
VDare and others pointed out what a scam this is, basically it allows corporations in America to import a huge number of low wage tech workers to replace American workers and removes the nationality restrictions. From VDare Senate Passes Indian Green Card Giveaway—Will Trump Veto?
The deceptively-named Fairness for High-Skilled Immigrants Act scraps country caps on migration and allows India to dominate our immigration system. It’s estimated that over 90 percent of professional employment-based visas would go to Indians for the next 10 years under the bill. The Act is heavily touted by the Indian lobby and Big Tech.
Trump probably won't veto it unfortunately and this bill will be the final insult to the American people who voted for him. As Vdare pointed out, this bill passed the Senate by voice consent, meaning not a single Senator opposed it, but voice consent prevents any Senator from having their name attached as voting yes for this monstrosity or having any actual debate on the floor of the Senate.
We are told by our rulers that we need to import STEM workers to "be competitive" but as the Center for Immigration Studies points out, we already have too many STEM grads in America: America Has More Trained STEM Graduates than STEM Job Openings
It has become quite clear that America has more high-tech college graduates than needed to fill high-tech jobs now and, importantly, the nation will keep producing many more such graduates than job openings in the future — so why the shrill calls from the industry that there is a shortage?
The debate revolves around two sets of initials: STEM (science, technology, engineering, and math) graduates and workers and the H-1B temporary worker program that floods our labor markets with low-cost, docile, high-tech nonimmigrant graduates, mostly working in computer-related industries.
Why the demands, as supported by the Senate's Gang of Eight, from industry for huge increases in the number of H-1B workers? Is it a genuine shortage of talent, as the industry claims, or is it because, as the Wall Street Journal1 of all publications, put it, the firms want to continue to staff their operations "with Indian expatriates who earn significantly less than their American counterparts"? I think the Journal has it right.
We all know the answer. Mass immigration of low wage and docile workers that will do substandard work but they will do it cheap. We don't need more tech workers to fill jobs, but Big Business wants more foreign tech workers to keep wages low and profits high. From the linked article: 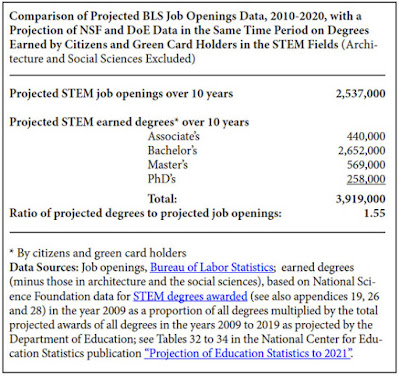 In the middle of a pandemic, with millions of people unemployed, in a nation where we have been talking about "re-skilling" workers for high tech jobs, the Congress decided that one of their highest priorities should be importing more Panjeets and Sahibs to fill American jobs.
Before the unanimous voice consent approval in the Senate, the bill originally passed the House on a vote of 365 to 65. Republicans voted 140 to 57 in favor of this massive gift to Big Business, including my idiot Congressman Jim Banks who is set to get another nasty email from this constituent. Jim Banks is the ultimate empty suit, back-stabbing Republican. He is in a very safe, deep red district. He doesn't seem very bright and certainly isn't reliable but he will keep on winning until he stops running for re-election or gets caught banging a staffer, and maybe not even then.
Why would the GOP support that kind of a bill while Trump is still in office and fighting the result of the corrupt election and with two Senate seats in Georgia on the line, knowing that people are paying attention and it would get noticed?
Quite simply it was a middle finger to middle America. A declaration of sorts, saying that it is time for our betters to bring us to heel. We got a little out of hand and uppity the last four years but that is all over now. Back to the good old days where middle and working class Whites were expected to keep our mouths shut while our country was destroyed from within but still show up to vote for Republicans every couple of years. The ugly truth of "conservatism" is that there are very few recognizable conservatives in the Republican Party and most Republican "leaders" despise and fear heritage Americans almost as much as their Democrat counterparts.
Another good rule of thumb: if something is awful enough to get such overwhelming bipartisan support you can be sure it is awful for just about every American. Something has to be really bad for it to get the support of both liberals and conservatives.
Mass immigration is the perfect example of why bipartisan legislation is universally awful. Democrats get huge numbers of fecund and easily manipulated new residents who will breed large numbers of future Democrat voters simply by giving birth to them on American soil. Republicans will get the cheap labor demanded by the Big Business lobby and Chamber of Commerce.
I don't blame people from India wanting to come here, getting away from their sweaty armpit of a nation. Even working for crap wages and living in a tiny apartment in California is better than living in India. I do blame those who are voting to bring them here.
For a short time, until Biden gets Epsteined or dies of some mysterious illness, things are going to go right back to business as usual in D.C. In a couple of months Trump will be forgotten. The jockeying for position for 2024 has already started in the GOP ranks, with Li'l Marco Rubio, Nikki Haley and sodomite Richard Grenell seeking to claim the mantle of conservative standard-bearer and the honor of losing gracefully to Kamala Harris in her re-election bid.
2016-2020 was a blip, a mere bump in the road in the path to inexorably replacing the people who made America into what she once was and transforming the greatest nation on earth into a festering swamp of diverse serfs and consumers ruled by an alien ruling class that hates every one of them.
There is no kraken. No one is going to coming to save us. We aren't voting or "unifying" our way out of this.
The time is coming my friends.
Posted by Arthur Sido at 9:46 AM