The Educational Malpractice Of Gifted And Talented Programs

One can spend a lot of time pointing out the various ways that the public “education” system has failed and continues to fail the American people. It is almost cheap to do so, it is so easy. For every super dedicated teacher like my sister who makes a real difference in the lives of the kids in their classroom, there are a bunch of people who got into teaching because they a) didn’t know what else to do, b) weren’t smart enough to do anything else, c) wanted a job with access to and authority over young kids and/or d) thought a job where you work only 8 months of the year sounded cool. And sure, the molestation rates for public school teachers is way higher than that of Catholic priests, which in no way excuses the behavior of those “priests” or the Catholic hierarchy that covered for them. I suspect a lot of that was going on when I was in school but back then without cell phones for teachers to send and receive explicit photos of minors and social media for teachers to leave a handy electronic trail it was harder to track. Yes, the public school system has morphed into a step up from a combination juvenile detention center/cattle holding pen/really expensive daycare, a system that churns out millions of students without the basics of an actual education and with most of their critical thinking and creativity crushed out of them. That isn’t the point of this post.

What I wanted to write about was a specific area of the public school system and my experience in it, way back when I was in school in the late 70s through the 1980s to 1990 when I graduated. It can be tempting to think things were better back then, and in a lot of ways they were. We still learned American history that didn’t teach that America was an awful place that for some reason the rest of the world still wants to come to. We read classic books that maybe had un-PC language. We learned math the old fashioned way without worrying about it being racist. It still was a system that didn’t do one very important thing: dealing with students who were not average.
As a kid I could have been described as “intellectually gifted, academically lazy”. That isn’t arrogance, mostly because it is true plus I have a lifetime of experience that taught me that just being really intelligent only gets you so far. From the very beginning of my schooling, the teachers and staff didn’t know what to do with me. This is a common story retold by a lot of well-above-average students. I arrived at kindergarten with poor skills at cutting things out with scissors but able to read, and reading at a relatively high level. While my classmates were learning to read, I sat on the stairs outside of the classroom reading the Reader’s Digest with an 4th grade girl. At multiple points in elementary school it was suggested that I be advanced a grade, a suggestion my parents rejected.
As my schooling progressed and I skated by on being smart and lazy, I was selected for our school district’s LEAP program for “gifted and talented” students. In the first few years, it was a larger group, maybe 12-15 kids. I can’t recall for certain and we met for a short time each day and did fun little activities. We got involved in “Olympics Of The Mind”, sort of an intellectual competition where we competed against the gifted students from other schools on stuff like building structures out of Popsicle sticks to see who could make the strongest structure or an activity where we had to navigate an obstacle course while blindfolded while our team gave us non-verbal cues to guide us.
Then I moved into middle school where it gets academically more rigorous. It is also the time when you shift from “girls are icky” to “hey what’s happening and why do I find that so interesting?”. I spent most of homeroom monitoring the maturation process of a girl named Andrea. Anyway, when we got to middle school, LEAP was also going to be expanded to our middle school for the first time but for a smaller group of students. More than half of the LEAP kids from elementary school didn’t make the cut but a few of us did. It was in middle school where things really went sideways. We had a regular sized classroom with just a handful of students and a full-time faculty member.
Keep in mind that we were the smartest kids selected from a group of smart kids.
In a sane educational system, we would have been challenged with a highly rigorous academic curriculum. We would have done everything the other kids were doing and a whole lot more, engaged in hard science, literature and philosophy. We would have gotten the challenges we never did in our regular classes.
Nope.
Our teacher was a little too groovy for that. What we were mostly given was endless reminders of how special and smart we were. We were allowed to kind of do whatever we wanted. I can’t tell you how many hours we played Oregon Trail on the only computer in the school students had access to. We also played a lot of Dungeons & Dragons, which granted was a great way to engage creatively but I played D&D outside of school anyway. I can’t for the life of me remember anything even remotely challenging in my years in our middle school gifted and talented program. It was mostly focused on boosting our self-esteem and praising us for an innate trait without encouraging us to make use of that intelligence. 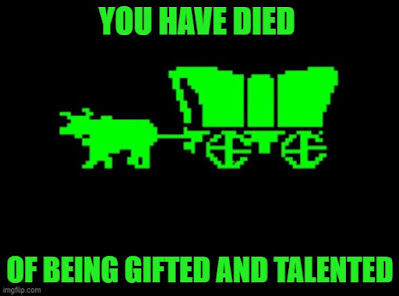 What we did come out of the LEAP program with was a sense of entitlement. The world and especially the schools owed us because we were smart. The rules were for the dumb kids. Studying and working hard were lame. That worked for middle school because at least in my case I was smart enough to pay little attention in class to anything other than girls and still skate along.
Then we moved to 8th grade and high school (in our system, 8th graders and high school was in the same two buildings). LEAP was over although our old middle school LEAP teacher tried to keep a couple of us engaged in the program. That wasn’t happening for me at least. Suddenly we were in with high school kids and being smart wasn’t really as impressive as it was in middle and elementary school. Girls liked jocks, not nerds. Despite having little natural aptitude and being really small, I joined the football team where I was awful on the rare occasions I played and the wrestling team where I was better but tended to wrestle to not lose rather than to win.
Academics got a lot harder. Now we were taking biology and chemistry and more complex math, coursework that you couldn’t fly through just by being smart. But I also had zero academic discipline or study skills because those were for the proles. My grades were less than stellar, especially in harder classes like math. When a class got to looking like it was going to be a hassle, I would just drop it. No one questioned why I was dropping these harder classes, after all I was really smart. By my senior year I was basically taking civics, which I could pass in my sleep, and Vocational Agriculture, and a bunch of study hall periods. I used to skip school, a lot, and got away with it.
High school led to college and now they really didn’t care how smart I was and the pattern repeated itself. Challenging classes got dropped and I majored in political science where I could bullshit my way to A’s.
Years after school, I ran into the other really smart kid from LEAP, a girl who was pretty socially awkward but also very smart. We got together one day for coffee when she was in town. I had gravitated to corporate financial services because it was something I could bullshit my way through with no effort and little actual work. I found out she was an out of work actress who did balloon animals for parties. Here we were, the two smartest kids in our school by a wide margin, doing very little with our lives. Meanwhile, at least two of the girls who didn’t make the cut to middle school LEAP are now doctors. A boy who didn’t make the cut ended up going to Yale and runs a very, very successful business and probably makes more in a year than I have made combined my whole life.
It turns out that being above average smart and having good work habits is more profitable than being super smart and lazy. Who knew?
Anyway, that is a lovely little trip down memory lane but so what?
The so what is this. Our public school system tries to do too much and fails miserably. People on the extremes get shafted. In our high school, the kids with below average intelligence really got the short end of the stick. They were shuttled to shop class and where possible were sent to Penta County, our local vocational school, to learn a trade, not because that is a sensible thing to do but just to get rid of them and warehouse the less intelligent kids.
In trying to have a school system that is all things to all people, it fails everyone.
The same is true for America as a whole. When we were 13 newly independent colonies with a common English heritage, things were OK. As regional differences grew sharper, we ended up with a civil war to bring the Southerners to heel. America spread across the continent and extended from the Atlantic coast to the Pacific, from Alaska to Florida and Maine to Hawaii. The strain on our culture was already bad and getting worse but now? The American system and our culture is so hopelessly muddled that it has become like the public school system: trying to be all things to 330 million people and failing everyone but the oligarchs.
No one is happy, no one is content. Even the filthy rich people want more and more.
Our system is a great one but it is inadequate for a pluralistic, multi-racial nation. That is not a knock on our Constitutional Republic, because no system is adequate.
America’s public schools need to be smaller in size and more limited in scope. So does America itself.
I have been saying this since February of 2017, a month after the inauguration: Is It Time To Once Again Dissolve The Political Bands That Connect Us?
Things have only gotten worse since. I couldn’t have imagined in February of 2017 that things would devolve this quickly but now a lot of people are starting to talk secession and dissolution of the Union.
Most of our institutions have and are failing us, from religious to educational to governmental. It is time for a radical reshaping, not a Great Reset that further cements the power of the elites but a going of our separate ways. Where are the leaders with the courage to say this?