This never stops being funny. 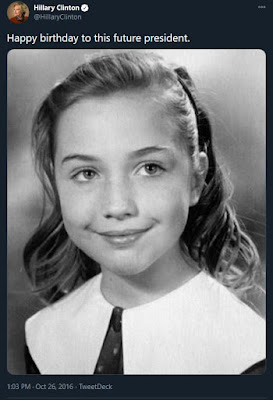 The hubris is incredible. In late October 2016, Hillary was already starting her victory lap, picking out her cabinet, preparing for her victory party in a venue with a glass ceiling. Get it, a glass ceiling? Cuz she is a woman and glass ceilings and stuff? Very subtle. But probably thanks to her cruising to a victory that didn't materialize and taking for granted the former Democrat voters among White working class voters in Michigan, Pennsylvania and Wisconsin, Hillary ended up losing to Trump and now that homely little girl will never, ever grow up to be President.
What could be better than four years after she arrogantly tweeted this out than her having to watch helplessly as the United States Senate votes to confirm Amy Coney Barrett, Trump's third Supreme Court appointment and the one who will push the majority into solid pro-life standing. Hillary's hubris with a week to go before the 2016 election might be remembered as the reason Roe v Wade is overturned.
The irony is delicious and it couldn't happen to a worse human being.
Posted by Arthur Sido at 7:29 AM