Mass Shootings Are Way Up In 2020. Why Isn't The Media Saying Anything?

There are two major gun-related trends in America in 2020.

One, we have seen one record breaking month of gun sales after another. Guns are flying out of stores and manufacturers simply can't keep up with demand. The same is true for ammunition and prices are skyrocketing. Ammo that cost around $.20 per round in January is now triple that and rising fast. A huge percentage of the buyers are first time gun buyers, and many of them are women and minorities.

Two, the number of shootings across America are up in most urban areas. I have been writing about this for months but it shows no sign of slowing down. It is not an exaggeration to say that almost every urban area in America is experiencing a massive increase in gun violence while many other, less serious crimes are on the decline.

The two trends would seem at first blush to be related as they both involve firearms but they really aren't.

It is also not just garden variety shootings that are way up but where we see the most growth is in the category of mass shootings. Mass shootings are not up a little bit, the numbers are skyrocketing. 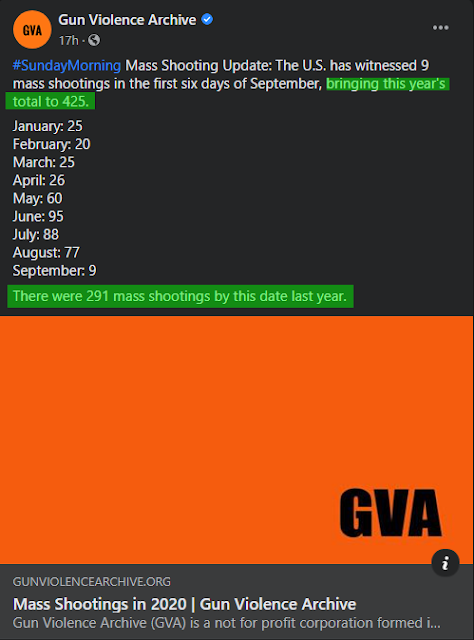 By my reckoning that is a 68% increase in mass shootings versus 2019. I would say this is one of the most significant trends in crime in America 2020 and in a normal year, especially an election year, this would be front page news. But it isn't.

Now it is true that "mass shooting" is a relatively amorphous term but in general it means four or more people shot in a single incident, not including the shooter. It is also a politically loaded term. I endlessly run into people online (mostly younger White people) who insist that most mass shooters are White men, a narrative they have been fed by the media, when in fact White male mass shooters are fairly rare. When I point out that even the New York Times admits that mass shootings are concentrated in the black community to the tune of 75% of incidents, their brains start to malfunction as they do whenever they hear statistics and facts that run counter to their programming (see: The Most Important Government Report You Will Never Hear About). When I ask them if they know there have been over 400 mass shootings already in 2020 and how many they have heard about? Their minds pretty much explode.

Even when the leftist media does recognize that mass shootings are mostly occurring in black communities, they spin it as "racist". Case in point, this article from the left-wing The Trace:

From the linked article: 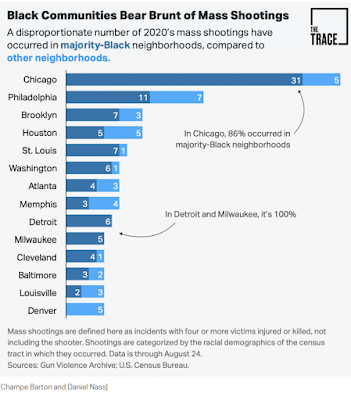 Look at the language: "black communities bear brunt of mass shootings". Mass shootings aren't a natural phenomena like rain and they aren't a manifestation of White supremacy becoming corporeal.

Black neighborhoods are hit hardest because black people are doing most of the mass shootings. The language makes it sound like these are just randomly happening in black neighborhoods. More:

“All of the root causes that fuel the cycle of gun violence are intensified right now,” said Greg Jackson, advocacy director at Community Justice Action Fund, which is based in Washington. “There aren’t fewer police officers out there, but there are fewer jobs and fewer educational opportunities.”

This is what we have been hearing for decades. The problem is not intrinsically rooted in the black community, it is external. They don't get enough money for jobs and education or of course the silver bullet for gun violence in black communities: midnight basketball leagues. Most people read something like that and just skip on by but I like to see who is being quoted and what they are all about. Mr. Jackson works for the Community Justice Action Fund, which sounds innocuous enough. The CJAF website features links to sections like these: 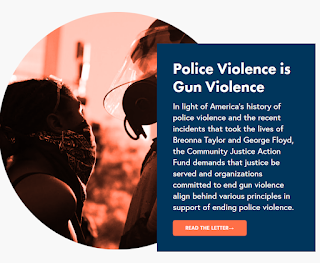 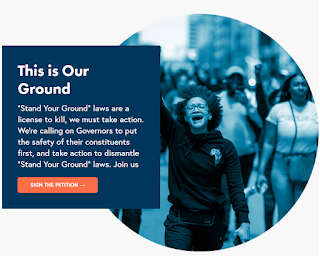 Stand your ground laws basically state that a person doesn't have an obligation to flee when confronted with a potentially violent situation. This is rooted in the Western tradition. As a free man in America, I shouldn't be required to run away when in public. Overturning these laws puts violent criminals in control. If I am in public and someone threatens me, I have to run away? Why should I be forced to flee from public spaces because some people can't control themselves? Stand your ground is so rarely abused that when it does it makes national news. I also found the title of that section interesting "This is Our Ground". Why is it "their" ground as blacks and not "my" ground as a White person?

So I dug a little deeper and looked at their publication "A Policymaker's Playbook". It is a document chock full of accusations of "racist" police practices and demands for, as you probably guessed, more money: 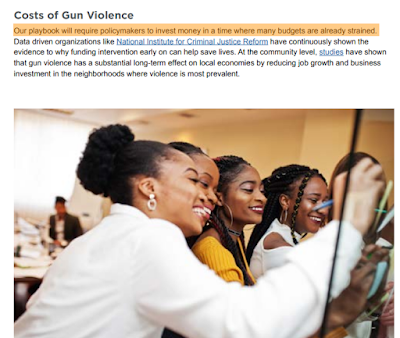 Having art classes for black women will certainly reduce the number of young black men deciding to solve every problem by shooting into crowds of other blacks.

America is awash in these sort of organizations, run by blacks and mestizos, that demand more funding that conveniently enough goes to their organization while ignoring the actual sources of gun violence in black communities: young black men raised without fathers in a culture that glorifies violence and encourages the sort of impulsive behavior that leads to people shooting at each other over any conflict. The message is always the same: police are the cause of the problem, not the response to the problem.

Again I ask the question. With mass shootings up almost 70% and over 400 of them already occurring in America, why is there so little media coverage? The Trace is hardly a mainstream publication and even there the entire article blames "systemic racism" for the issue. When I took the screenshot from the Gun Violence Archive, there were 425 mass shootings in 2020 and the day I took that screenshot, Sunday September 6, 2020 was the 250th day of the year. That means there have been 1.7 mass shootings every day of the year so far in 2020. Just last weekend, so far as their tallies are sometimes delayed, there were at least a dozen mass shootings over the Labor Day weekend, but you probably didn't hear anything about them unless one happened in a nearby city.

That should be national news on every outlet but it isn't.

The answer is two-fold.

First, mass shootings in America mostly happen in the black community and that community has been solving conflicts with gunfire for decades. Back in the 80s America was introduced to the concept of "drive by shootings" thanks to the crack wars. It was also the time when we started seeing the rise of the gangsta rap from outlets like N.W.A. with charming lyrics like this:

About to go and damn near went blind
Young niggaz at the pad throwin up gang signs
Ran in the house and grabbed my clip
With the mac-10 on the side of my hip
Bailed outside and pointed my weapon
Just as I thought, the fools kept steppin

Decades later and young black men still respond to slights and insults by grabbing a gun.

In other words, blacks shooting blacks by the thousands just isn't all that interesting because it has become so commonplace, just the background noise of America's urban areas, "part and parcel".

The second reason? This is an election year and if Trump is going to have any shot of winning, it will be because people fear that the rampant violence in our cities will accelerate when the bLM and antifa thugs are emboldened by a Biden/Harris administration. Law and order, or at least the rhetoric, is all Trump has left to run on and the media isn't going to help him by covering the daily mass shootings in the black community.

For the media in America, pretending that thousands of blacks aren't getting shot by other blacks is a small price to pay to rid them of Orange Man Bad. I think many blacks understand this at some level but they also don't care because Orange Man is "racist".

Media bias is found not just in what the media says but also in what they cover and what they don't cover. This has always been true but in 2020 the media has dropped all pretense of being anything but the party organ of the Democrats. Perhaps some black lives could be saved by honestly examining the issue of black gun violence but as we all know, to the media the only black lives that really matter are the ones they can use to push their narrative.
Posted by Arthur Sido at 9:29 AM