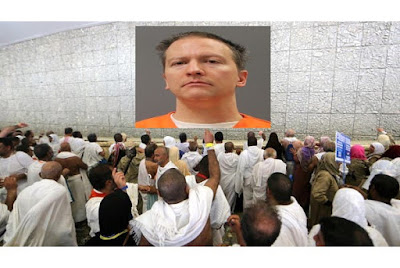 As with any religious system, Western neo-Marxism has it's own set of rituals, a liturgy that expands with each passing year. Some of it is fairly innocuous like putting #believewomen or of course #blacklivesmatter in your social media bio. Or changing your social media avatar to a picture of you wearing a mask because you care. Other rituals are less innocent, like looting local stores when a jury verdict goes a way you don't like. Worse yet, mutilating the genitals of young children so parents can brag about their "trans" kid on social media or murdering your own child in the womb in the name of "Choice".
Other religions have similar rituals, from abstaining from meat on Friday during Lent to digging up the bones of long dead John Wycliffe for the "heresy" of translating the Bible into English, burning his remains and then throwing his ashes into a river (see: The New Heretic Hunters).
One of the weirdest comes, no surprise, from Islam where they engage in the Stoning of The Devil, the Islamic ritual of taking a break from throwing stones at women by throwing stones at a walls to smite the devil. This is a ritual the Left often replicates in their own perverse way (see: The Stoning Of Trump) and now they have a new scapegoat upon which they can place the collective sins of White people for endless condemnation and ritualistic sacrifice: Derek Chauvin.....
Feds plan to indict Chauvin, other three ex-officers on civil rights charges
This comes on the heels of the Feds digging up an old case where Chauvin restrained an African youth which is obviously racist because the yoof was black and Chauvin is White and then just yesterday I reported that the three men accused in the death of construction enthusiast/jogger-extraordinaire Ahmaud Arbery were being charged with Federal "hate crimes" before they even have their criminal trials.
As an aside Steve Sailer reported today that the Feds were waiting to arrest Chavin if he was found not guilty by the jury to try to stave off the looting and mayhem.
Sort of like throwing a virgin into a volcano to appease the angry gods, the Left now intends to continue to ritualistically punish Derek Chauvin for the crime of restraining a black man loaded up with a lethal dose of drugs. It sort of worked, the guilt verdict placated the angry Africans temporarily so Minneapolis didn't burn to the ground. Sure violent crime is rampaging in Minneapolis (see from Michael Tracy: One Year After George Floyd, Minneapolis Is “Murderapolis” Again) but as long as they got their pound of flesh from a White cop for the death of one black man, it is OK that dozens or hundreds of additional black men will perish. From Tracy's essay:
This is especially true in Minneapolis, where the tumult of the Floyd episode and its fallout has now lasted for nearly a full year. Because it simply cannot be disputed that the prevalence of unjust killing and violence in the Twin Cities area has vastly increased since last summer’s protests and riots. Minneapolis recorded its second-most homicides ever in 2020 — after only 1995, when the city was ignobly dubbed “Murderapolis” in national media. And the trend has continued to escalate in 2021: between January 1 and April 25, the number of homicides increased by 92% compared to the same period in 2020. More than 80% of the shooting victims in 2020 were black.
If 80% of 2020 shooting victims in Minneapolis were black in a city that is less than 20% African, that certainly seems like a problem but noticing that is itself racist. Oops.
As with all primitive violent gods, the gods of Marxism demands a sacrifice to appease their wrath but they also require these sacrifices on a regular basis. Having expended their sacrificial lamb with the Floyd trial, now there is an opportunity to keep scourging him for the crowd. A "hate crimes" trial is a great opportunity for the Feds to rend their garments and gnash their teeth. Maybe they can hire some professional wailers to mourn the passing of a violent piece of shit? Whatever it takes to keep the lid on the pot.
You can see where this headed. Hating Derek Chauvin, screaming at him in his orange prison jumpsuit and frothing at the mouth like the Two Minute Hate from 1984 is a high, holy obligation. Can we be far from the point where April 20th, the day Derek Chauvin was found guilty, will be declared a national holiday where we celebrate the guilty verdict? Maybe we can get rid of a racist holiday like Independence Day to make room. 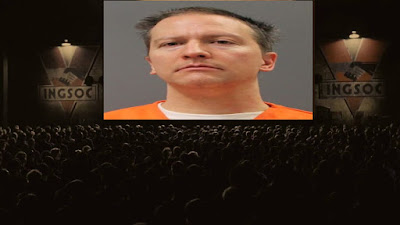 But as the ritualistic punishment of cops gains steam, the angry gods of Marxism will demand even more sacrifice. If you think the other three cops accused in Floyd's death are going to get a fair trial, you are crazy and the Feds are already preparing hate crimes charges against them as well. Pretty soon the demand for more sacrifices will outpace the supply of sketchy police killings and the standards for "murder" and "hate crimes" will expand. It won't be long before a black man who dies in a high speed pursuit while driving a stolen car and shooting at the cops will be a new George Floyd and the cops pursuing him will be tried and summarily executed for murder.
At least Derek Chauvin will probably be safe in prison, he is far too valuable as the newest shaitan to be allowed to get shanked in jail. Dead he becomes a martyr, alive he is a warning and a totem to be rolled out whenever needed.
This shouldn't surprise anyone. As America imports the third world it is inevitable that we will see our society regressing back to a more primitive age. It might be a wise investment to stock up on goats and sheep, anything that can be sacrificed easily, because if there is one thing that primitive religions are known for, it is an insatiable thirst for blood.
Posted by Arthur Sido at 6:17 PM