In the 14th century, an Englishman and Catholic priest named John Wycliffe translated the Bible into English, the language of the English people, and openly rejected several key teachings of the Roman Catholic Church. This was around 133 years before Luther kicked off the Protestant Reformation. Wycliffe died in December 28th, 1384 after suffering an apparent stroke while giving a Mass and died shortly after.

30 years later, a Roman church council declared John Wycliffe to be a heretic. Since he was already dead, and therefore couldn't be tortured and killed in some horrifying fashion as was the practice of the Roman Catholic Church when dealing with "heretics" (at the same concil, Jan Hus was declared a heretic and delivered over to be burned alive at the stake, his ashes were then thrown into the Rhine River), the religious zealots settled for burning his works and also exhuming his body, burning his remains and casting those remains in the river in 1428, 44 years after his death. 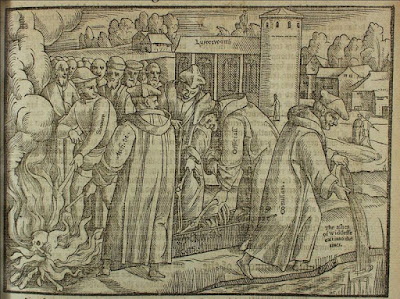 In the 19th century, a Tennessean named Nathan Bedford Forrest, a cavalryman and slave trader who later (allegedly) served as the first Grand Wizard of the KKK, fought for the South in the Civil War/War Between The State/War Of Northern Aggression. On the losing side, Forrest lived until 1877 and was buried in Elmwood Cemetery in Memphis, later moved to Forrest Park, named in his honor which was subsequently renamed "Health Sciences Park". 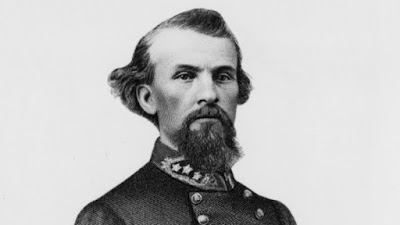 Whatever one thinks of his personal beliefs, Forrest was a fierce and brilliant military leader for the South and he has been dead for over 140 years in a war that ended even longer ago. But Forrest was a slave trader and a member of the Klan and fought valiantly for the South as an important figure in American history, so the man cannot even be allowed to rest in peace. 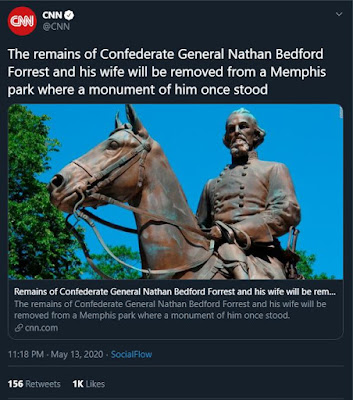 The modern heretic hunters of the Left are determined to erase the real history of America and replace it with one of their own imagination so people like Nathan Bedford Forrest must be humiliated and erased.

I am a northerner and always have been, never having an interest in living in the south. Even our brief time in Kentucky is remembered mostly for being super hot. Most of my life I viewed the Union forces as the good guys and the south as the bad guys. I grew up in northern Ohio near the Michigan border, so the boys in blue were my people. Still, I never in my wildest imagination would have dreamed of tearing down statues of Confederate leaders and the idea of digging up the remains of a man and his wife out of spite 130 years after his death is inconceivable to me.

But digging up the remains of a dead man and his dead wife to make some sort of juvenile point?

That only makes sense to a religious zealot.

What possible harm is there in having the remains of a man from Tennessee buried in a cemetery in Tennessee for over 100 years? What is accomplished by moving their remains? I doubt many people even know they are there and of those that do, very few probably care. It borders on some sort of primitive pagan, animist cult behavior, as if the 130 year old bones of a man and his wife possess some sort of evil spirit that must be excised from a park.

A theme the Zman continually refers to is the way that the Left treats "racism" or "misogyny" or "transphobia" as some sort of evil spirits that require a religious ceremony to excise. Being a "racist" isn't a political issue or a cultural problem or even a personality flaw. It is a demonic presence that makes people do terrible things and it must be excised by ritualistic ceremonies and oblations. Forrest, Robert E. Lee, Jefferson Davis aren't flawed historical figures from 150 years ago, they are real and demonic spiritual beings that impact us today.

Of course there is also the humiliation factor. Whether you care about Forrest or not, and generally speaking I don't, there are still the endless little petty insults inflicted on the American people by a tiny number of "activists". We are forced to be obsequious toward generally awful people like Martin Luther King, Jr. and act like people who lived centuries ago are deserving of endless punishment, torment and humiliation, sort of a leftist secular version of purgatory.

And finally there is the fantasy world where most of the noodle-armed beta males and screechy feminists live, where they fancy that they are valiant warriors smiting Nazis/the Klan by tearing down statues of people dead for more than a century or putting #resist and their pronouns on their twitter account. While all of these antifa soyboys would wet themselves in fear if faced with the real life Nathan Bedford Forrest, a man who could thrash a dozen of them without breaking a sweat, they feel incredibly heroic by desecrating the grave of a man long dead.

Everything in leftist circles is based on imagery, gestures and rhetoric. Every person sits somewhere on an ever-shifting scale of virtue. Having a hierarchy has always been human nature, most of humanity in history lived under some kind of a king or monarch. The strongest, smartest or most ruthless ruled and the rest lived in an order under them. That hierarchy has been flipped over. Joel Stoltzfus and I were talking about this on Facebook the other day and he made a couple of pretty profound comments about hierarchy:

It is an inversion. I had been taught that we should ignore outward appearance and instead to value the content of character or the merit of the individual. In this upside-down hierarchy, one must ignore everything and rely solely on declared identity as the measure of everything and that the group one belongs to should afford them special privileges regardless of what they contribute.

Hierarchy isn't based on merit but "declared identity". The more outlandish your claims to oppression, the higher on the scale you are. On the opposite end, the least respected people in our society are those who quietly work a job, mow their lawn, raise their kids and neither cause trouble or demand special privileges. Just wanting to be left alone now marks you as an "oppressor". To hear it told, a working class white family with a couple of kids, paying their taxes and attending church and saving for retirement or perhaps a little vacation home, is really the most evil thing you can imagine, rather than the bedrock of our civil society.

When NBF's bones are removed from the cemetery, it won't be enough. If his bones were crushed under the wheels of a transgender Afro-Latinx in a wheel chair, burned in a carbon neutral way and then encased in concrete and thrown into the sea, it still wouldn't be enough. The religion of neo-Marxist identitarianism has an insatiable appetite for vengeance and empty gestures but because it never actually does anything, it is never enough. If the faces of the men on Mt Rushmore were blasted away and replaced with Trayvon Martin and Barack Obama, it wouldn't be enough. I am starting to think that even widespread genocide wouldn't satisfy them because their secular religion depends on blood lust and hatred, and the more they try to appease that lust, the greater it grows.

This will never stop. Desecrating the grave of Nathan Bedford Forrest will accomplish nothing and will sate their wrath only for a moment. There is no compromise, there is no reasoning with these people. That leaves us with very few options and more and more people are waking up to this reality. Hopeful enough of us will before it is too late.
Posted by Arthur Sido at 9:04 AM