Like I have said repeatedly, the sole remaining purpose of the Federal government under the occupational junta is to weaponize the various agencies in a jihad against the heritage White population of America. A new phase has started, one that was already running but is now coming into the open: creating new enemies lists and actively punishing political dissent and terrorizing potential dissidents before they can make waves.
Exhibit A:
America First manlet Nicholas Fuentes has landed on the Federal do-not-fly list.
I don't care for Fuentes, I think he is a clown and completely unserious making him unsuitable to be considered any sort of leader. This whole thing seems like a lark to him, something to do instead of working part-time as a barista. But his "crime" was being present at the January 6th shenanigans and as far as I know he has not been convicted of any crimes for those events. Still he says the wrong things and upsets the wrong people so now he cannot fly domestically in the United States.
Exhibit B:
The FBI raid on Rudy Guiliani
The FBI showed up at Rudy Guiliani's apartment, searched it for a couple of hours and left with multiple electronic devices. Allegedly this has to do with whether Rudy was involved in influencing U.S. policy on behalf of the Ukraine. What it really is about is going after a Trump ally and sending the message to others: cross the junta and you will go to jail. Meanwhile there is no investigation of influence peddling in Ukraine by the Biden crime family, or China for that matter.
Exhibit C:
The three White men arrested in the killing of jogger/burglar Ahmaud Arbery have been hit with Federal hate crimes charges.
This just came down this evening. Travis McMichael, his 65-year-old father, Gregory, and William "Roddie" Bryan, haven't even had their day in court yet and already they are being harassed with trumped up "hate crimes" charges. Again the message is clear: even if a jury of their peers finds them not guilty, they will still go to jail because no matter what you cannot interfere with a black man committing a crime. A lawyer for his family said as much on Twitter:

A "fail-safe to the state prosecution" is just code for gaming the system to guarantee the results they want.
Meanwhile the "new and improved" military is being prepared to enforce the dictates of the globalist order as the police have been proven unreliable and likely to have their hands full with feral gangs of diversity shooting each other and smashing up Chuck E Cheese "restaurants". From Matt Bracken on Gab: 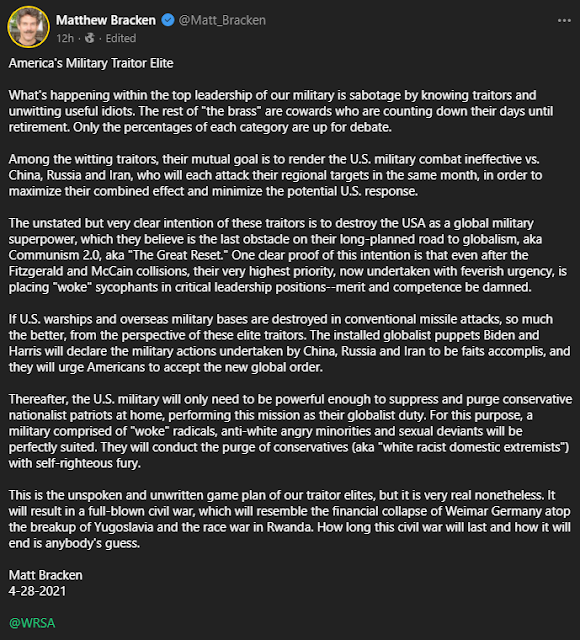 The money quote:
Thereafter, the U.S. military will only need to be powerful enough to suppress and purge conservative nationalist patriots at home, performing this mission as their globalist duty. For this purpose, a military comprised of "woke" radicals, anti-white angry minorities and sexual deviants will be perfectly suited. They will conduct the purge of conservatives (aka "white racist domestic extremists") with self-righteous fury.
Yep. Transitioning trannies. Overweight women who get into cat fights with each other. Various diversity troops. Fat kids in air conditioned offices carrying out drone strikes. This is the new military, unsuited for fighting real wars but probably good enough to launch hellfire missiles at dissidents between nibbles of jelly donuts.
Hold on you might be saying, astute reader that you are. The U.S. military is prohibited from carrying out activities like that within the borders of the United States. The Posse Comitatus act and all that.
Ah but don't forget this grasshopper: we have already established that civil liberties and the Constitution are rendered null and void in times of a "public health crisis". Remember as well that we have likewise established that "racism" and "White supremacy" and "gun violence" are all...."public health crises".
The U.S. military is one of the most beloved institutions in our society with a proud tradition but like most of our venerable institutions, it has been utterly corrupted into something completely different. What it has become would enrage and sicken those heroic warriors of America's past.
The list of political prisoners in America grows daily. James Field. Travis and Gregory McMichael. Kyle Rittenhouse. The dozens of protesters from January 6th being held in solitary confinement. Be smart in your actions and focus on your personal area of operation. You won't do anyone any good locked up for life. The time is coming but not here yet. 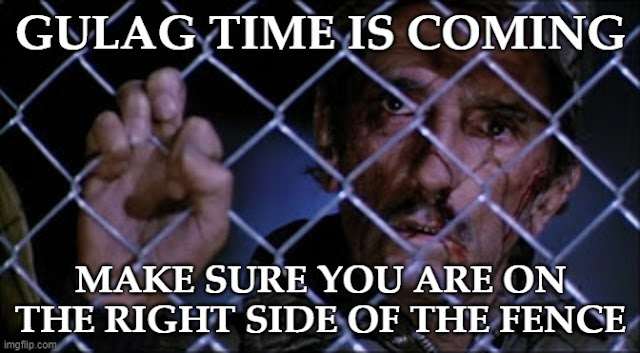