The Great Reset: No Walking Your Dog, No Driving In The Country.

Dave Cullen has a pretty good new video out dealing with the Great Reset. One of the most interesting blurbs was that the little video he featured in a prior post, talking about no one owning anything and not being permitted to eat meat in the future, has suddenly disappeared. Curious.
I don't share Dave's optimism that we are going to "win". I don't think there will be any winners, just the dead and the survivors.
Something new he added, apparently coming to Ireland but as usual Europe is just surrendering a little faster than America. The idea that much of the nation will be considered "ecologically fragile" and your fancy self-driving car won't even let you go to those areas. You will be confined to "smart cities" which is just code for "prisons".
Funny how we see the "environmental" movement once again being used as cover for Marxism. Although the environmental movement with scare tactics like "global warming" and "climate change" failed to frighten people into accepting Marxism, perhaps because the threatened environmental calamity was too far in the future and thus the manufactured pandemic that was supposed to kill people in enormous numbers, phony environmentalism is still being used to keep people locked into urban areas and eating lab grown protein and bugs instead of actual meat.
I also liked his Ready Player One comparison. The idea of a world where people are jacked in and distracted from the crushing poverty and soul-killing confinement by endless amusement is a common theme, from RPO to Huxley's Brave New World to the Battlestar Galactica prequel Caprica. Give people enough money and "food" to barely live, scare them away from social contact and seeking to better their lives through phony "pandemics" and provide them with endless entertainment that is better than real life, with most people living in a virtual world that sucks less than the real world but keeps them placated enough to never seek to build a better world. It would have been easier for European pioneers to just stay in Europe but they came to the New World to build something better. Not because it was easy but because it is what humans do. We aren't wired to just sit inside and watch Netflix all day. The isolation is going to drive people crazy. That isn't stopping them from trying to make us do just that. See this tweet: 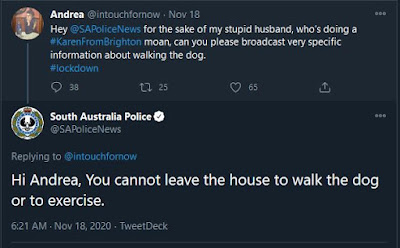 First, while I condemn and find repulsive the idea of hitting any woman unless she is attacking you first, and especially when the woman is your wife, I have to wonder if maybe "Andrea's" husband should at least give her a firm smack on the bottom for calling him stupid on Twitter. Second, the South Australia Police are telling people that they may not leave the house to walk the dog or exercise.
You.
Cannot.
Leave.
The House.
Someone going outside to walk their dog, in the open air and sunlight, and probably wearing their face diaper, is statistically speaking of zero threat to contract or infect any other person with the Chinese coronavirus. None. That is what the liberals like to call "science". We can't go for a walk, we can't exercise, we can't go to fitness centers. I am sure that being locked inside, slowly getting fatter and more depressed and isolated, is better for public health than potential exposure to a virus with a better than 99.9% survival rate for people who are not elderly with a comorbidity.
The Great Reset isn't about "racial justice" or "gender equity" or "income inequality". It is all about turning the middle class into a giant underclass, controlled via fear and by controlling our access to food and money if we don't comply. Billions of unemployed people can only stay inside and watch Youtube so long.
It is also worth noting that you tend to see the worst excesses of the state happening in places like West Europe and Australia with a completely disarmed populace. There is a lesson here as America potentially faces a President who has made disarming Americans a signature policy of his administration.
The Great Reset is already being called a "conspiracy theory" at the same time the elites are talking about it openly.
Get ready, it will take a great deal of commitment to resistance to face what is coming.
Posted by Arthur Sido at 12:07 PM