Lots of people think that when things "go back to normal", ammo prices and availability will magically return to normal levels, normal in this case being fourth quarter 2019 when you could buy cheap, brass case full metal jacket 9mm for $.16 per round, as much as you wanted, and if you were a bad person you could get steel case for even less. Today? Steel 9mm is triple the price of brass in 2019 and you are lucky to get it. Yes, yes, you can occasionally find it cheaper if you know where to look but for most people, they struggle to find anything at all. I am sitting pretty when it comes to most ammo but I still pick stuff up when I find the right ammo at the right price.
Even if Trump does what seems pretty impossible right now and pulls this election out, overcoming fraud on a massive scale, things aren't going back to normal. Here is an example:

Vista already has over a year of orders backed up and we still have a month and a half left in 2020. As the odds of Biden taking over are probably better than 90% at this point unless Trump's lawyers have something significant they are holding back, this is just going to get worse.
Some stuff is going to be worse than others. The President can't really ban "assault rifles" by executive order but he can lock down imports and that would impact stuff like AK platform rifles and I would expect the same will be true for the big manufacturers of ammo overseas like Tula and Wolf in Russia and Prvi Partisan in Serbia.
Meanwhile prices are starting to jump on ARs, I just saw that Palmetto State now has their basic classic M4 AR-15 listed for $699. That same rifle was around $200 less at the beginning of the year. This is what I would consider to be an entry level AR. 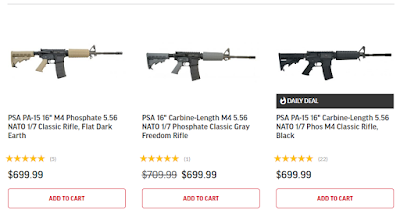 Again, I would expect this to be the beginning of the price inflation, not the end. Some of these companies are likely looking at 2021 and not expecting to survive the year so maybe they are trying to make what cash they can while the doors are still open. While there is probably going to be a Republican majority in the Senate, given the massive and open voter fraud we saw on election day, I wouldn't be surprised to see the same shenanigans in the Georgia Senate run-offs. Even if the GOP holds the majority, there are plenty of squishy Republicans you can just about count on to join Democrats on gun control bills.
Meanwhile the Biden team is already in cahoots with the leadership at the ATF to go after some low hanging fruit: "ghost guns" and pistol braces.
Unaccountable ATF Heads Colluding With Biden Transition Team to Ban Pistol Braces
Here is the key portion....
November 10th, 2020, during an ATF conference call, Acting Director Regina Lombardo told those in attendance that the anti-gun Biden transition team has reached out to the ATF to get the agency’s “top priorities”.
AmmoLand News' anonymous source said Lombardo told those on the call that her priorities would be pistol braces and 80% lower receivers.
80% lowers are simply "almost complete" lower receivers used on AR-15s and some semi-auto pistols. A few steps in the manufacturing are left incomplete, so the 80% receiver doesn't have a serial number and therefore doesn't have a background check or a Form 4473 associated with it. I am not sure how many, or if any at all, completed 80% receivers have been used in crimes but anything the government doesn't control makes them super angry. Pistol braces are something I have talked about before (see: Alphabet Bois At It Again) as something the ATF has been dying to go after but they are about to have an ally in the White House. There are millions and millions of AR/Ak pistols with braces that are potentially about to become illegal and/or require an exorbitant retroactive fee.
Bottom line, what isn't illegal is going to be scare and expensive.
Mark it down boys, you heard it here. If Biden is seated as President in January, there will be some sort of "Right-wing extremist" mass shooting within two months that will be given wall to wall coverage by the media (unlike the daily black on black mass shootings) and will be used as a pretext for sweeping gun regulations. Sure it will be a false flag but what are the lives of a few dozen innocents to advance the agenda?
We are facing a perfect storm, the 2nd Amendment Armageddon many of us have been sounding the warning about. Tens of millions of Americans and a whole bunch of cops are going to have to make some sobering decisions pretty soon.
Your window is closing fast.
Posted by Arthur Sido at 9:27 PM