I spent way more time than I should have yesterday trolling a guy on Twitter who kept repeating the risible claim that white people do most of the mass shootings in America. I kept providing examples and statistics showing that in spite of what the media tries to convince us of, the truth is that like all shootings and violent crime, blacks are the main culprit (and victims) of mass shootings. His response was to keep providing a Newsweek article that he thought "proved" his point. 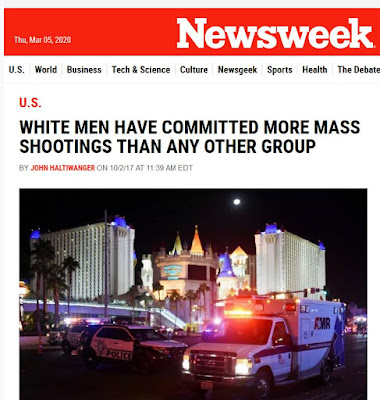 Wow, that seems really damning and it also runs directly counter to what I have been saying and even what the New York Times claims, namely that blacks commit 75% of mass shootings. How can we reconcile such a stark disparity?

Well we start by actually reading the story, rather than simply copy-pasting the link because the headline sounds good. Here is the critical paragraph:

Statistics show that since 1982, the majority of mass shootings — 54 percent — were committed by white men, according to data from Mother Jones. Black people were the second largest perpetrators of mass shootings based on ethnic background, but only accounted for roughly 16 percent of the total incidents during the same time period.

It is critical because it lays out the assertion, specifically that white men commit the majority of mass shootings, but also because it provides a link to the data used to make this assertion. The link leads us to a project tracking mass shootings at Mother Jones, a far left political magazine. The fact that they are far left doesn't inherently negate what they are saying but it was useful in that it automatically made me even more suspicious of the "data". What I wanted to know was how they were counting mass shootings because there are different methods used. Some only use 4 or more killed, which tends to weed out a lot of the big mass shootings and coincidentally over-represents white shooters who, just being honest, are better shooters. More common is the broader definition which counts people shot, not just those killed. For example, early in January there was a mass shooting in Kansas City where 17 people were shot but only one woman and the shooter were killed. Using the narrow definition of four or more people killed, this wouldn't count as a mass shooting even though 17 people were shot. The page linked by the Newsweek article didn't give their method but there was another link that led to a different page at Mother Jones that did lay out their criteria for a mass shooting. Bingo.

First thing, they use the "four or more killed" criteria which as I mentioned tends to under-report black shooters, although they modified this for shootings after 2013 to include three or more killed. Then they exclude gang shootings. Well hell, that is sure to give you the result you are looking for! Just take out conventional criminal shootings to focus only on specific types of mass shootings that oh by the way also happens to wildly over-represent white shooters. Since a lot of black mass shooters have a prior criminal record and/or gang affiliations, you simply don't count those and the percentages go way down but even doing that you still find that blacks are over-represented and whites are under-represented based on their per capita population.

There is an old saying, statistics never lie but liars use statistics. This is why you have to do the research and actually dig into what people are claiming. A lot of people think that providing a link to an article they likely didn't read is "proof". That is obviously not the case but most people are simply either too lazy or intellectually incapable of doing a little bit of work before making a statement.

Mass shootings by white guys tend to be more intentional and targeted. It is a different sort of shooting and it is also quite rare. Shootings like the Aurora theater shooting or the Charleston church shooting are splashy and make headlines. These were planned out and carried a high body count, and the shooters usually were suffering some sort of mental illness and are disturbingly often associated with taking SSRI antidepressants.

Black mass shootings, which are far more common, tend to be a gunman/gunmen who are targeting someone and the majority of people shot are just bystanders or as is often the case like in the Kansas City shooting mentioned above where 17 people were shot, it was a spur of the moment response to an altercation where the shooter apparently had no intent to commit murder originally. This is increasingly true as mestizo mass shooters become more common, as well as Asians involved in gang activity.

So they are very different kinds of shootings and the planned, calculated mass shootings by white gunman are far more rare than the "spur of the moment/innocent bystander" shootings by black gunmen, the kind that happen basically every weekend. However in general the media gives very little attention to black mass shooters and they become just background noise for the urban environment, while at the same time focusing on the occasional white mass shooter to create the impression in the public mind that whites commit most mass shootings. It is a macabre game many of us play when a mass shooting happens to anticipate the race of the shooter and then see how differently the media responds depending on whether he is white or black. At the same time, most legislation that is allegedly aimed at curbing "gun violence" disproportionately impacts legal gun owners and does nothing to curb the actual problem with shootings and murder.

The intentional avoidance of covering black mass shooters is part of a wider pattern to decriminalize criminal behavior that tends to involve blacks. There are calls to stop prosecuting "fare jumpers", people who vault over the turnstiles in subway stations to avoid paying the fees needed to keep the trains running, leaving the burden of paying for the trains to fall on decent people who pay their fare. The same is true of "low level drug offenses" which also lead to lots of blacks getting arrested. A video went viral this week of three black women nonchalantly ransacking a store in San Francisco, filling up garbage bags with merchandise because they know no one will stop them. Thanks to California's Prop 47, retail theft of under $950 is now only a misdemeanor and the police don't bother arresting people. There are stories of shoplifters using a calculator to getting a tally of what they are stealing, stopping just short of $950, running the stolen merchandise out of the store and then coming back in to start stealing all over again. No one stops them, who wants to get shot by some hoodlum for shoplifting? Open air markets have sprung up for people to sell their stolen goods in California and again no one does anything about it primarily because the people doing this are black and brown.

As the American electorate moves inexorably toward a majority-minority situation with black and mestizo voters taking over as the majority, politicians will continue to ramp up their efforts to pander to these voters and a key factor is keeping black and brown people out of jail, not by discouraging them from committing crime, but by refusing to arrest or prosecute blacks and mestizos when they do break the law. Making it harder to put criminals in jail simply emboldens criminals to keep breaking the law and the people who suffer the most for it are ironically other blacks and mestizos. It is a vicious cycle that leads to a lot of crying black mothers on the news and inevitably this will also lead to more crime against Asians and whites. None of that matters just as long as the political Left keeps advancing their agenda and ignorant people take at face value what the media is telling them.
Posted by Arthur Sido at 9:56 AM