I have been eligible to vote for over a quarter of a century. I registered as soon as I was eligible to and have voted in every major and the vast majority of minor elections ever since. I have not always been super excited about my votes, like voting for Gary "What's an Aleppo?" Johnson in 2016 but the only vote that I can say I truly regret and that I am frankly embarrassed about is my vote in 2008 for John McCain. I would never have voted for Obama of course but I do wish I had voted for Libertarian Bob Barr or Constitution Party candidate Chuck Baldwin instead of McCain. My disgust in my vote for McCain has grown over the years and reached an all-time high yesterday when Senator McCain tweeted out this: 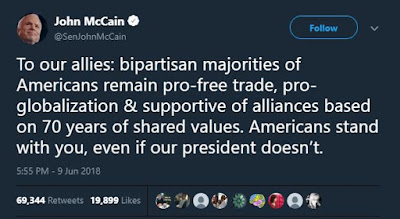 What an ignorant statement. President Trump won the Presidency in large part by speaking out strongly against unfair trade practices and bad "free trade" deals. Senator McCain might take note that almost 63 million people voted for President Trump, or 3 million more than voted for McCain in 2008. Trump's stance on international trade resonated with people in places like Michigan, Ohio, Pennsylvania and Wisconsin, all states that Trump won and not surprisingly McCain lost, where the magic economic fairy dust of "globalization" hasn't worked out so well for workers and their families.

The economic and trade policies of the United States shouldn't be centered on what is best for our G7 allies and getting the most cheap crap to sell at Wal-Mart as possible. There is far more to a healthy economy than cheap T-shirts and Marvel action figures. A healthy economy means that we need to make some stuff ourselves, otherwise everyone either works in high-tech, something most people aren't able to do, or they work in low paying service industry jobs and those jobs are going to disappear fast (for example the soon to be ubiquitous self-service ordering kiosks at McDonalds).

As for our "allies", they live and thrive under the protection of the might of the United States military. The U.S. spends over $600 billion in military spending, much of that going to man bases on the soil of other G7 nations or to keep our carrier groups protecting the freedom of the high seas. The rest of the G7 spends the following amounts (in billions):

So we spend more than double the total of our six "allies" combined. Their people and their economies have the luxury of relying on the United States for protection, at great cost to us. If the Russians or Chinese attacked Canada, how long would they last without our support? A week? That isn't likely to happen but it certainly makes it easier to focus on your own trade policies when your country is protected by someone else.

Regular Americans are starting to figure out that we were sold a bill of goods when we were promised prosperity and peace via globalization. It has been great for Wall Street. For Middle America, not so much. But hey, at least we can buy cheap stuff made by little children in sweatshops!

Maybe Senator McCain stands with Germany and Canada. That is his right. As for me I stand with America. So does President Trump and so do tens of millions of Americans that McCain arrogantly claims to speak for.
Posted by Arthur Sido at 5:42 PM