The Next Stage Of Weimarization Of America: Inflation Nation

Two similar stories last week and one this week caught my eye:
Hobby Lobby to raise minimum wage for full-time employees to $17 per hour
Hobby Lobby's wage increase comes just three months after a similar move from Target, which increased its minimum wage to $15 per hour earlier than planned because of the pandemic.
...and...
Walmart raising wages for about 165,000 workers
The new wage ranges for hourly team lead roles start between $18 and $21 per hour and can go up to $30 per hour in Supercenters.
For the math challenged among us, including me, paying $30/hour for a full-time worker is $62,400 per year. Notice these are not store manager positions, these are hourly team leaders who I assume are responsible for just one segment of the store, clothing or grocery or the front end (cashiers). For comparison purposes, that is also about what my base pay was to be a bank manager running a branch with 15 years of experience in financial services. Sure being a bank manager means M-F 9-5 with a ton of paid time off and great benefits plus bonuses, and that was more than a dozen years ago but still.
Best Buy seeking workers for holiday season
Available positions include sales, customer service, merchandising inventory and car install technicians. Pay rates begin at $15 per hour.
That is a pretty drastic jump in pay. Just a few years ago, as recently as 2015, starting wages for hourly retail workers were under $9/hour. Even going to just $15/hour is a 50% increase in five years.
Some background. My first jobs were in retail, in high school and college, and then I spent a few years once I graduated from college working in retail management (boy that degree in PoliSci sure paid dividends!) plus a short stint in retail management in 2015. Retail can be a tough job because you deal with the public, you work all of the days everyone wants to have off and the pay was historically poor. It was a step above fast food but required very little in terms of tangible skills besides pretending to be polite. It was a great job for kids, you learn to be responsible and to deal with any loon that walked in off the street, discovering how stupid and unreasonable most people are. Just being an hourly worker wasn't great for adults because it just didn't pay very well and it wasn't really intended to be a career job. The ambitious people went the management track and the rest found other employment. We need jobs like this for younger people and people with limited professional experience to get that professional experience they needed later on.
Again, it bears repeating that generally speaking retail work is an entry level job that requires no real skills to be hired other than being able to be friendly, or these days to not be actively unpleasant.

While it won't break the bank for Wal-Mart or Hobby Lobby to arbitrarily raise the wages of retail workers, it will have two significant impacts for the rest of us:
1) Smaller retailers for whom employee wages are a significant cost will be pressured to raise wages or if they cannot they will be at yet another major disadvantage when it comes to hiring workers. If you own a small store and haven't been crushed by Amazon and Wal-Mart yet, having to drastically increase wages is going to make it just that much harder to compete.
2) Non-retail workers will have to be paid more to reflect their more valuable skill set. As an example, a newly trained welder with a certificate in welding that took a year or more of study to obtain can get a starting job as a welder around here for $16-18/hour. Welding requires a great deal of training and skill to do properly and the job is hot, dirty and physically demanding (that's what she said). Why would you go through the trouble of learning to weld when you can make just as much stocking scented candles and yarn at Hobby Lobby?
I have no objection to people making as much as they can for doing their job. If the owners of the Lakers want to pay LeBron James tens of millions of dollars to be an ignoramus political activist who occasionally dribbles a ball, that is their business and bully for him.
However, when one segment of the labor force suddenly leapfrogs other, more skilled segments, it shakes up the whole thing. We won't see an immediate impact but by next year it will be harder for jobs in basic manufacturing to attract workers when they are paying the same wages as Target. That isn't good. We need more people making stuff in America, we don't need more people working retail. If businesses can't hire the workers they need for manufacturing, they will be even more tempted to move production overseas where you can pay middle school kids in Thailand 5% of what you pay an American worker. Libertarians think that is great because it improves the profit for corporations, but it is devastating to our society. In the short term it might seem great for retail workers but in the longer term, plans are already being made to eliminate those workers entirely through self-checkout lanes and robots that replenish shelves, just as fast food workers are being eliminated with self-service kiosks and apps to order your food.
There is a direct relationship between wages and prices. When they move in tandem, it evens out more or less. When one or the other increases or deceases dramatically? Then things go a little haywire. There is already a lot of inflationary pressure in the U.S. thanks to the creation of "money" out of thin air (see: Mo' Magic Money from me and Deflation, Inflation, Collapse – Now With Muppet Jokes from John Wilder). If already struggling businesses get into a wage war to attract workers on top of everything else happening, it is going to increase prices and drive more companies out of business. Our libertarian friends would again applaud this, bad companies should go out of business, but a lot of these are not "bad companies", they are being crushed by government intervention outside of their control.
If manufacturing jobs and skilled trade jobs increase wages by a similar percentage to keep them ahead of retail workers, that is going to make everything more expensive. Durable goods, houses. Everything. If you are in a bunch of debt, this can help. It is easier to pay off $20,000 in credit card debt or a $250,000 mortgage when your wages inflate rapidly. However if you are a saver, it can hurt because inflation will eat up all of your earnings and rapidly diminish your buying power. That is the big reason why you are supposed to invest in the stock market for retirement, to theoretically keep ahead of inflation. Putting $10,000 in a CD or under your mattress when you are 30 means that money is only worth a fraction of what it was worth when you are retired while money in the stock market increasing at historic values* will outpace inflation. In theory and in the past. In 2020 and the near term? I will stick with The Four Gs Of Investing In 2020: Guns, Grub, Gold and Ground*..
Rapid inflation can lead to economic chaos. The government prints money to keep the people happy, prices inflate in response, the government prints more money, and pretty soon you get the infamous trillion dollar bills in Zimbabwe. 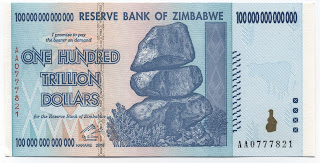 Or the people with wheelbarrows of marks in the Weimar Republic to buy a loaf of bread or using the worthless currency as a cheaper alternative to wallpaper. 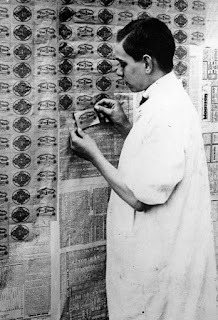 These sudden wage increases for retail workers concern me, mostly because they are not based in any real reasoning. Retail workers are not more skilled and with a lot of retailers shut down or limited in hours/capacity, it seems like there shouldn't be a huge demand for them.
Inflation is a quiet killer until it isn't and we show a lot of signs that we are headed to a dramatic inflationary period. You should consider the evidence before deciding to hold a significant amount of assets in cash or cash equivalents*.
Inflation could be managed on it's own but 2020 and beyond shows all the signs of a series of compounding problems all coming to a head at once. If the money in your pocket this morning has half the buying power in the afternoon, that is going to cause massive instability and the Republic doesn't have much tolerance for more instability.
*I am not an investment advisor, this is not investment advice, past performance is no guarantee of future results, etc
Posted by Arthur Sido at 11:01 AM