Poor Nick Cannon. He must be new around here. Life comes at you pretty fast when you mention The Chosen People™. 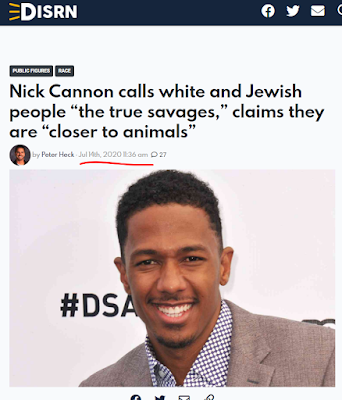 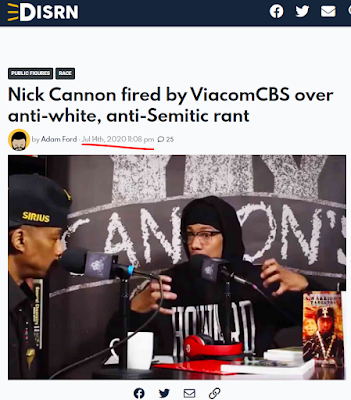 I see Nick Cannon has gone from his crazy, non-threatening, happy-go-lucky host of America's Got Talent to sporting the all black look and the Malcom X glasses. I would bet at least even money that he doesn't need glasses but he thinks they make him look more intellectual. Spoiler alert: it doesn't.

What did Nick say that got him in trouble (in a Youtube video that is still up as of this morning). Disrn has the breakdown:

Nick Cannon calls white and Jewish people “the true savages,” claims they are “closer to animals”

Here is the money quote:

"They have to rob, steal, rape, kill, and fight in order to survive. So these people who didn't have what we have, and when I say ‘we,' I speak of the melinated people, they had to be savages, they had to be barbaric because they're in these Nordic mountains, they're in these rough torrential environments, so they're acting as animals, so they're the ones closer to animals, they're the ones that are actually the true savages."

Cannon went on to make clear he was referencing "Jewish people, white people, Europeans, the Illuminati," in his remarks.

If you are like me and have a greater than toddler familiarity with the Queen's English, you might wonder what the hell "melinated people" means. Don't worry, you didn't miss that day in school, "melinated" is a bullshit made-up word blacks use to describe themselves. According to the Urban Dictionary "melinated" means:

Beautiful people of color, especially from the black race

The idea of melanin being the main factor in racial differences, which is not remotely true, is connected with the idea of having more melanin being a superior trait. One of the leaders of the Marxist terrorist group calling itself black Lives Matter, Yusra Khogali, went on a screed about this and claimed that White skin is sub-human and being White is a recessive genetic defect. Again, race isn't skin color. Anyway.

His guest, Professor Griff (note: not an actual professor) also claimed that he wasn't antisemitic because blacks are the real semitic people"

"Because the Semitic people are black people," Cannon added.

Thanks for that little nugget of wisdom "professor"!

Nick screwed up here. He would have been fine saying that White people are inferior to blacks and are more "savage", which is pretty funny since we colonized and bought and sold them as slaves for generations until we decided to stop doing it and for at least the last half century Africa has been largely dependent on aid from Whites to stave off starvation, plagues and civil wars. Being anti-White is pretty much mandatory for entertainers. His mistake was mentioning Jews. Adam Ford noticed the same thing in his story about Cannon being fired, specifically that the statement only mentions him being "anti-semitic" (emphasis mine).

ViacomCBS said in a statement:

"ViacomCBS condemns bigotry of any kind and we categorically denounce all forms of anti-Semitism. We have spoken to Nick Cannon about an episode of his podcast Cannon's Class on YouTube, which promoted hateful speech and spread anti-Semitic conspiracy theories. While we support ongoing education and dialogue in the fight against bigotry, we are deeply troubled that Nick has failed to acknowledge or apologize for perpetuating anti-Semitism, and we are terminating our relationship with him. We are committed to doing better in our response to incidents of anti-Semitism, racism, and bigotry. ViacomCBS will have further announcements on our efforts to combat hate of all kinds."

While condemning his anti-Semitic rhetoric, ViacomCBS did not appear to mention Cannon's anti-white comments.

I don't get much into the "JQ" or "Jewish Question" here. It is without dispute that Jews are conspicuous by their over-representation in a number of areas that are highly influential in our society: entertainment and the media, academia, corporate leadership especially in banking and financial services and of course the legal system. While Jews are only 2% of the population, three of nine (33%) U.S. Supreme Court justices are Jewish (Ginsburg, Breyer, Kagan). Yes, American foreign policy seems more focused on Israel than our own security, not to mention the relatively enormous sum of "foreign aid" we give Israel every year in spite of Israel being a first world economy. And yes, when you read something especially outrageous and anti-White on social media, a quick glance at the early life section on Wikipedia very, very often reveals they are of Jewish ancestry. It is a topic that bears some scrutiny but an obsession over it turns off NormieCons and BoomerCons, especially evangelicals who have been deceived thanks to the outsized influence of the risible dispensational theology. It might be worth looking into more but frankly doing so is a great way to alienate the average White guy who thinks Israel is Our Greatest Ally™.

What you can't do is notice this trend and especially you can't mention it. While Jews consider themselves a distinct ethnic group, not a part of the White community, pointing this out is enough to get you cast into outer darkness. Maybe Nick Cannon underestimated the response or maybe he knew what it would be and didn't care.

What will be interesting to see is how the black community responds. If a White person says something "racist" and especially if they say something "antisemitic", the worst backlash comes from within their own community. In this case I think that Cannon's standing will likely be raised in the estimation of a lot of the black community. Louis Farrakhan is a virulent "antisemite" and he still gets to sit on a platform with former President Bill Clinton, Jesse Jackson and Al Sharpton" 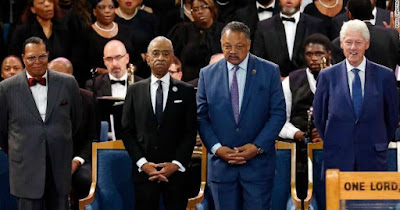 This was the trainwreck of a funeral for Aretha Franklin where Clinton was ogling and all but drooling over Ariana Grande in her club dress she wore for a funeral while she shook her money maker in front of him, and she was then pawed in the pulpit by pastor Charles H. Ellis III, who was casually grabbing her breast as she tried to pull away while they standing behind a pulpit with the words "One Lord, One Faith, One Baptism" inscribed on the front. Maybe they should have added "One Breast" to the pulpit?

Clearly being an anti-White and anti-Jewish racist isn't a problem for the black community. Many of the Malcolm X/Nation Of Islam/Black Hebrew Israelite types openly hate Jews and it doesn't hurt them in their own community. Malcolm X said stuff like this....

....and is still revered in America and has streets and schools named after him, angering many conservative Jews.

The great challenge of the Left is holding together these groups who don't really like one another by making Whites their more pressing, common enemy. How long will that last?

Nick Cannon's comments don't really bother me all that much. They are the ignorant ravings of a small mind who buys into obviously ridiculous theories about race, like melanin and skin color being the basis for racial differences. It is kind of irritating that someone like Nick Cannon, a low talent hack who got insanely wealthy in a country created and built by White people (his net worth is in the tends of millions and he reportedly received $700,000 per episode for America's Got Talent), still feels qualified to sit in judgment of my people when he would be a nobody in any majority black country. If he wants to talk about savages, he can look at Africa. He can look at America's urban violence which is almost entirely black on black. He can look at blacks dancing and cavorting over Reginald Denny or black teens attacking a lone black girl in New York, beating her unconscious and then stealing her shoes. No race is free of savagery but no race has done more to move beyond the natural human state of savagery and violence than White people.

I don't watch CBS or anything Nick Cannon does, and I don't want people fired for saying things I dislike, even though it happens to people like me all the time. On the other hand, it is interesting to see what happens when you say bad things about certain groups and get away with it while saying the same thing about certain other groups gets you "cancelled".

In 2020 all politics are identity politics and centered in racial tribalism. Even though the people pulling the strings are ideologically Marxist, the flashpoint that is going to trigger something pretty awful is based on identity. Unless you realize and admit this, and get to the point where you recognize the double-standards, you aren't going to be able to understand our political system.
Posted by Arthur Sido at 11:54 AM