Why Are We Sending Foreign Aid To Other Nations? Especially Wealthy Nations?

The United States is a debtor nation, and making matters worse much of our government and our economy depends on debt based spending. Our current total national debt is well over $20 trillion dollars and when you add in the looming insolvency of Social Security, Medicare and many state pension plans, we are in very dangerous fiscal shape. Every year we spend close to a trillion dollars more than we bring in and I suspect the real number is probably higher. We are a nation that is looking more and more like the person strung out on credit card debt that ignores the phone calls and warning letters from debt collectors, using cash advances from one credit card to pay the minimum due for another credit card. Of course one big difference is that in the case of the U.S. our currency is the lifeblood of international commerce and we have thousands of nuclear weapons.

In light of our own bleak, debt-based fiscal mess, why would the U.S. be sending foreign aid to other nations? Or for that matter paying a wildly disproportionate amount of the budget of the UN?

News came out recently that the U.S. is cutting aid to the Palstinians by $200 billion. Then shortly afterward the news was that we were reducing our aid by $300 million to some random UN refugee agency.

The Trump administration announced Friday that it is cutting nearly $300 million in planned funding for a United Nations agency that aids Palestinian refugees after finding the operation “irredeemably flawed.”

The State Department said in a statement that after contributing $60 million to the United Nations Relief and Works Agency for Palestinian Refugees in the Near East in January, “the United States was no longer willing to shoulder the very disproportionate share."

The U.S. gives some $364 million each year to the agency which provides health care, loans and other social services to Palestinian refugees in in the West Bank, the Gaza Strip, Jordan, Syria and Lebanon. The U.S., which supplies nearly 30 percent of the total budget, is the largest contributor to the organization.

Neocons cheered because the Palestinians are the enemy of Israel, "God's chosen people™". The people who live in the various Palestinian territories and zones are generally speaking pretty poor, thanks to a combination of the incompetence and greed of their own leaders and the policies of the state of Israel. Then news came out that the U.S. was "suspending" $300 million in military aid to Pakistan. That is starting to add up, just think of how many miles of wall we could build with that!

"Conservatives" love to denounce foreign aid, just not 100% of the time. Just recently there was some news, although it is kind of hard to find, that the U.S. Senate approved a new bill, Senate Bill 2497, sponsored by Senator Marco Rubio, called the "United States-Israel Security Assistance Authorization Act of 2018". It can be kind of hard to dig out the actual amounts involved but there are little things like amending the agreement to provide money to Israel by "(A) by striking “equal to—” and inserting “not less than $3,300,000,000.”;" which in essence means that $3.3 billion annually is the absolute minimum we can send to Israel. According to USAID, Israel has pretty consistently received between $2.4 and $3.7 billion in aid from the U.S. since at least 2001, even though Israel is considered a "high income" nation, in the top of four possible categories. Just for some perspective, there are around 9 million people in Israel so $3.8 billion works out to around $400 for every man, woman and child in Israel paid for by the citizens of the United States to the tune of around $11 from every citizen of the U.S. Or another way of looking at it is that this amounts to around $23,000 per Jewish family in Israel. $23,000 per family being sent to an already wealthy nation, paid for by current and future tax-payers in America.

But that begs the question. Why are we sending aid, and not a small amount of aid, to Israel, a nation that has a gross domestic product around $350 billion with a population of only around 9 million people which gives it a per capita GDP higher than France, Japan and the U.K.? Israel is a highly developed nation, with a strong economy and a powerful military that has nuclear weapons. We even have a permanent military base in Israel to serve as a "trip-wire" in case some other nation attacks Israel. How does it make sense for a nation $21 trillion in debt to send $3 billion to Israel, a sum which is less than 1% of their GDP?

We can cheer about cutting aid to Pakistan and the Palestinians, and I am all in favor of that. In fact I am strongly in favor of cutting all aid to every nation by 100%, including Israel. But not only do we not cut aid to Israel, we are actually increasing our aid. You will have to look pretty hard to find a "fiscal conservative" that would even suggest reducing our aid to Israel. Criticism of Israel is verboten among "conservatives". Any questioning of our support for Israel automatically gets one labeled an "anti-Semite". Of all of the sacred cows of American conservatism, none is so secure as unquestioning support for our Greatest Friend™ and Closest Ally™ Israel. Recently Senator Rand Paul has held up the bill formalizing the "aid" package to Israel, not because he is "anti-Israel" but because he objects rightly to foreign aid in general. Needless to say some people are very angry about it and the various Israeli lobbying groups are trying to get him to back down. I have it on good authority that ads are running on the radio in Kentucky attacking Paul for this.

There are a lot of reasons for this, some which border on conspiracy theories, but a lot of it has to do with confused eschatology among American evangelicals and the very powerful Israeli lobbying machine. Many Christians are saturated in stuff like this: 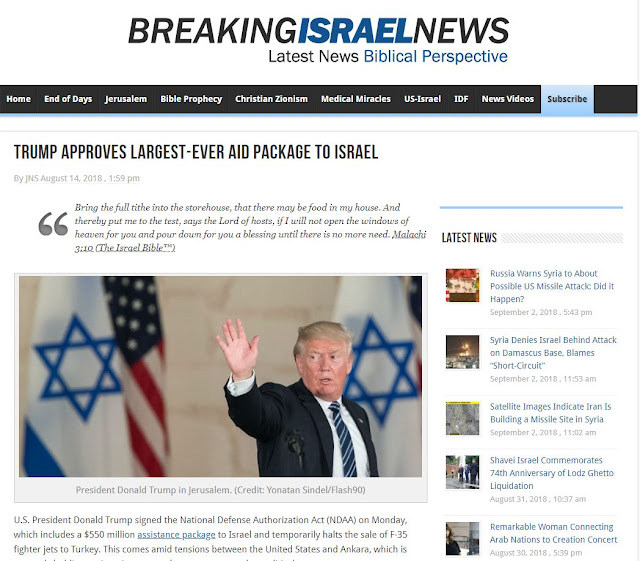 You might wonder what Malachi 3:10 has to do with U.S. foreign aid to Israel in 2018. Well it doesn't have anything to do with it but that doesn't matter because in the pop culture eschatology that dominates American generic evangelicalism, there is no distinction between the Old Covenant theocracy of Israel and the reconstituted secular Jewish ethnostate called Israel. Therefore foreign aid paid for by the tax-payers of America is the same thing as ancient Jews bringing their tithe to the storehouse. See how that works? If you are a Christian you can pay your "tithe" in a sense by voting to use the secular government of the United States to forcibly collect taxes/tithes and send them to Israel, even though virtually everyone in Israel vehemently rejects Jesus Christ. Social media is full of websites proclaiming Christian-Jewish solidarity while the reality is far different. However that is rarely challenged thanks to the dominance of dispensational theology and the fears of seeming anti-Semitic. This is what happens when your get your theology from the Left Behind series instead of the New Testament.  For more on the reasoning behind why American Christians are not theologically obligated to side in every dispute with the national of Israel, start with this post on my old blog: Repost: Israel, Gaza and the Gospel

The other reason that Israel, a highly developed nation with one of the finest and most technologically advanced armed forces in the world, receives enormous amounts of "aid" annually is the power of the Israeli lobbying army. It strains credulity to suggest otherwise. If you are running for office as a Republican, you better appear before AIPAC, the American Israel Public Affairs Committee. You had better talk the talk about Israel as our greatest ally and friend. It is not a coincidence that Marco Rubio, who has obvious Presidential aspirations, is the Senator sponsoring a bill to codify into law a bare minimum donation to Israel. AIPAC is widely considered to be one of the most powerful interest groups in America, and unlike the NRA or industry groups it represents the interests of a foreign government. The New Yorker ran a piece about AIPAC, Friends of Israel, and this quote is pretty powerful (emphasis mine):

AIPAC is prideful about its influence. Its promotional literature points out that a reception during its annual policy conference, in Washington, “will be attended by more members of Congress than almost any other event, except for a joint session of Congress or a State of the Union address.” A former AIPAC executive, Steven Rosen, was fond of telling people that he could take out a napkin at any Senate hangout and get signatures of support for one issue or another from scores of senators. AIPAC has more than a hundred thousand members, a network of seventeen regional offices, and a vast pool of donors. The lobby does not raise funds directly. Its members do, and the amount of money they channel to political candidates is difficult to track. But everybody in Congress recognizes its influence in elections, and the effect is evident. In 2011, when the Palestinians announced that they would petition the U.N. for statehood, AIPAC helped persuade four hundred and forty-six members of Congress to co-sponsor resolutions opposing the idea.

By any measure, the lobbying forces representing Israel's interest before the U.S. government are incredibly powerful especially when you consider what a small percentage of Americans are Jewish and the Jewish-Americans that we do have vote overwhelmingly Democrat. What is just as telling is that the Israel lobby is considered by most to be above reproach. The media and Congress can rail all day about the influence of Russia or Saudi Arabia but no one utters a peep about Israel. Two men, John Mearsheimer and Stephen Walt, wrote a paper that became a book on the Israel Lobby and the response was borderline hysterical.

What makes criticism of Israel so fraught with peril is that any criticism of the state of Israel is automatically conflated with antisemitism. You can be critical of Russia without being accused of being anti-Russian, you can be critical of China without being accused of being anti-Asian. But any criticism of Israel is automatically met with accusations of being anti-semitic. Maybe I am uniquely flexible mentally but I can question the wisdom of giving of $3 billion a year in aid to a secular nation without also hating the people that make up that nation because of their ethnicity and religion.

The bottom line is that the United States, a debtor nation drowning in debt and soon to be dealing with a fiscal crisis in our programs for seniors, has no business giving money to any nation, and that includes Israel. Americans are under no obligation, geopolitically, theologically or historically, to continue to fund any nation and certainly not a prosperous, independent and stable nation like Israel. Yes, Israel is surrounded by enemies and yes some of that is the result of how Israel was created. The United States can and does guarantee Israel's security. If Iran, which is incapable of doing so, or some other nation were to attack Israel, America would respond with overwhelming force. I understand that in the grand scheme of the trillions of dollars U.S. "budget", a mere $3 billion isn't a big deal but a $21 trillion debt is made up of hundreds of thousands of little spending line items that by themselves are not all that big of a deal. Israel doesn't need our money and we can't afford to keep paying them $3 billion a year. Good for Rand Paul for standing up against the slings and arrows of the Israel lobby to seek an end to the practice of a nation drowning in debt giving money to other nations.
Posted by Arthur Sido at 3:23 PM