Most people think that black Lives Matter sprung forth organically in response to "police brutality". Nothing could be further from the truth.

The story of BLM is far more complicated. To begin with, BLM came into being after George Zimmerman fatally shot Trayvon Martin in 2013.

In popular lore and the retconning of recent history, Trayvon Martin was a fresh faced little black kid who was murdered in cold blood by a White monster who shot him out of racism while little Trayvon was just minding his own business, wearing a hoodie and buying Skittles. The real story is that Trayvon was a pot-smoking thug, who likely was casing houses to break into, and attacked a Hispanic man, smashing his head on the concrete sidewalk and telling him he was going to die tonight. Zimmerman pulled his weapon and shot Martin, killing him. It is noteworthy that while BLM now is mostly about the police, George Zimmerman was a private citizen acquitted of all charges in the shooting of his assailant.

The subsequent killings of Michael Brown, the enormous criminal who attacked a cop and was shot and killed, leading to the dishonest "hands up, don't shoot" mantra as well as the less well publicized death of Eric Garner (the one death of the three that actually was questionable) further catapulted this "new" movement into prominence in 2014. From there the movement continued to spread, ostensibly a decentralized political movement but we know that isn't true.

A pattern began to form where any killing of black men by police was automatically assumed to be unjust and conflated with actual cases where the killing was questionable. Protests were held when a black man was shooting at cops and was killed by return fire, without much distinction from cases where an allegedly unarmed black man was killed by police (reminder that unarmed doesn't mean not dangerous). Then in 2016 a black man and supporter of BLM, Micah Xavier Johnson, ambushed and assassinated five cops during a BLM protest. For some reason BLM managed to escape the guilt by association.

Seven years after the formation of black Lives Matter, things are not any better and according to activists, things are getting worse. So what BLM is doing is not working and if anything it seems counter-productive and is exacerbating already tense race relations. So why keep doing this?

Mostly because the ideological roots of BLM are not in "black lives", they are steeped in Marxist theory and police brutality is simply a convenient cover story.

Several black women are credited with being the founders of black Lives Matter: Patrisse Cullors, Alicia Garza and Opal Tometi.

Cullors, aka "Patrisse Khan-Cullors" (she is "married" to another black woman, although I am not sure "she" is really a woman or not) was interviewed in 2015 and gave a rambling and boderline incoherent response to a question about the perceived lack of ideology in the BLM movement and in her replied declared that she was a "trained Marxist".....


Trained by who I wonder?

The muted threats of violence are growing louder and less muted. For example:

This was a statement made in 2019. He also said: “Fighting white people is a skill.” and “I’m confused why that is so controversial” .

Angry White grifter pretending to be a black guy Shaun King wants to destroy all "light-skinned" images of Jesus because they are "White supremacy":

Leading BLM activist Shaun King says "tear down" all paintings, statues of light-skinned Jesus: "They are a gross form of white supremacy"

King isn't a serious person and he is also a pussy but his voice carries weight among the ignorant. The days when churches (not not mosques or synagogues) are destroyed by mobs is right around the corner. Right or wrong, Christianity is associated with White, European culture.

The New York Times has been sponsoring the so-called 1619 Project, which is "re-examining" the legacy of slavery as a way to continue to retcon an institution that was widely practice throughout human history, across cultures and races, into a uniquely White "sin". The loony founder of this project is a crackpot black woman with pink or red dyed named Nikole Hannah-Jones. I am not sure what I said to her on Twitter but it must have upset her. 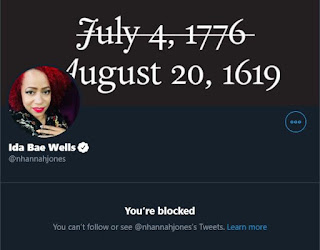 Anyway, she is quite the piece of work. She recently supported the claim that "government agents" were setting on fireworks to “to disorient and destabilize the #BlackLivesMatter movement.”.

We aren't done with her quite yet. The same woman seemed flattered that she helped inspire riots and criminal vandalism:

Still not done with her. Apparently her animus toward White people who created the sort of society where someone with her lack of talent could nevertheless find a very comfortable existence has a long history:

It goes without saying that a White person, assuming any still work at the New York Times, who said anything a fraction as offensive about blacks in 1995 would immediately be terminated and never work again in the media. Her crap 1619 Project won a Pulitzer Prize despite the fact that it was full of factual errors, proving that the PP has no meaning today. She also seems to think that black explorers managed to travel to America and helped build the Aztec pyramids long before those White devils made it. No explanation for why no one can find any trace of this happening, or how a people who failed to invent the wheel much less navigate the seas managed to discover America.

How about this chump?

Black Lives Matter leader states if US 'doesn't give us what we want, then we will burn down this system

Kind of a tricky statement since no matter what the US gives black Lives Matter, they will just demand more. As a people we have already transferred hundreds of billions from Whites to blacks and things just keep getting worse in the black community.

"I said," (Hank) Newsome told the host, "if this country doesn't give us what we want, then we will burn down this system and replace it. All right? And I could be speaking ... figuratively. I could be speaking literally. It's a matter of interpretation.

Hank Newsome has appeared on this blog before when he made the claim that...

...his organization considers itself at war with the police and that they are arming themselves for that purpose

Like Nikole Hannah-Jones, he is a little sketchy when it comes to history:

"I love the Lord and my Lord and savior," Newsome responded to MacCallum's prompt. "Jesus Christ is the most famous black radical revolutionary in history. And he was treated just like Dr. King. He was arrested on occasion and he was also crucified or assassinated. This is what happens to black activists. We are killed by the government."

At the conclusion of the interview, Newsome told MacCallum, "I just want black liberation and black sovereignty, by any means necessary."

So it is wrong to portray Jesus as a White guy (and he wasn't White of course) but it is fine to pretend he was a black guy, when he wasn't. The critical line in that quote is the "by any means necessary", or BAMN, a slogan that carries with it the implied willingness to use violence to achieve your desired goals. Newsome wants "black liberation" and "black sovereignty". I absolutely support blacks having sovereignty and self-determination but as I wrote last December, it isn't as popular as you might think: Why Isn't Black Nationalism More Widespread? It is easy to talk about "black sovereignty" until you have to actually do it and I think everyone understands that in true ethnostates, some races have proven more capable of self-governance than others.

How about one more? In 2016 the co-founder of black Lives Matter Toronto, Yusra Khogali, had some naughty things to say about "men and white folks" in general. She tweeted:

Plz Allah give me strength to not cuss/kill these men and white folks out here today. 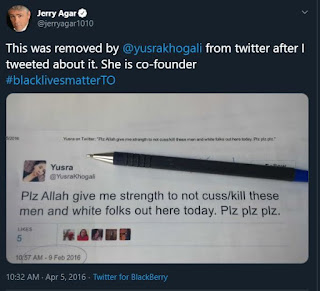 Her Twitter account is now protected and her profile pic shows her with a shaved head, not a good look for her. She has also been on record talking about "white skin is sub-human" as part of a pretty hilarious screed that can only be described as "Melanin Supremacist". The whole thread is funny because on the one hand she says White people are "recessive genetic defects" but doesn't explain how such defective people held blacks in bondage and colonialism until we decided to stop. It was bad enough that even a little sissy White guy named James Di Fiore, writing for the Huffington Post called for her to resign in 2017 although not before tacking on this little cucky disclaimer:

Now, normally my white skin would admittedly preclude me from even suggesting that a black activist should hang up the megaphone, but Khogali has made a habit of directing violent, hateful language towards people with white skin, so much so that I feel comfortable calling her out.

How low must your testosterone levels be and how high your own self-loathing to write something like that? It takes her talking about killing men and White people in general for him to summon the courage to be critical. In fairness, some of his recent tweets are kind of funny.

The entire black Lives Matter movement is thoroughly steeped in Marxist ideology along with a foundation based on racial resentment and hatred, accompanied by a willingness and even eagerness to engage in violence against Whites. While so-called "White supremacist" groups are hounded and can't even gather in public, and number so few that they couldn't organize a decent fantasy baseball league, black Lives Matter operates in enormous numbers, with impunity and no interference from the government. Their stated goal of "racial justice" is simply theater for the masses, providing unassailable cover for degrading and undermining the fabric of society in order to pave the way for revolution, a revolution they foolishly believe will lead to greater justice.

Marxism is the ideological foundation of Communism, the most violent and murderous political ideology known to mankind. Few of those who were in the vanguard of Communist revolutions enjoyed the fruits of a worker's paradise and many ended up with a bullet in the back of their head.

For all of the façade that is on display for normie consumption, bLM is quite open about their goals and those goals are vintage Marxist ideology.

We didn't win the Cold War, the enemy simply changed masks, and now 30 years later they are on the cusp of victory, a war fought and won right under our noses while we slept.
Posted by Arthur Sido at 2:46 PM