Manufacturing Freedom One Lower Receiver At A Time

I wonder if any young adults understand Braveheart today, if they grasp that it is worth fighting and dying for freedom instead of simply selling yourself into indentured servitude for some mindless entertainment and "security"?

With that in mind, I liked this video from Anderson Manufacturing. Anderson is known for making low cost lower receivers, the "firearm" part of an AR-15/10.

It is such a quintessential American story. A guy leaves his big corporate job, opens a machine shop, works his ass off, expands and expands, then finds something they do well and focuses on it.

What I really loved was the line where the guy mentioned they make 800,000 receivers a year. Sure a lot of those are saved away for a rainy day but here is one shop in Hebron, Kentucky banging out over 2000 receivers that form the foundation of an AR-15 every single day. The video is from 2017. Let's assume they were making numbers like that in the two years prior to 2017, and that they are on pace to do the same in the two years since 2017. That five year period would mean that a single manufacturer outside of Cincinnati produced around 4,000,000 (4 million) AR lowers in a five year period. That doesn't even count other manufacturers like Palmetto State, the big players and others like Spike's Tactical and Aero Precision (although it wouldn't surprise me if Anderson made their lowers and etched their logo on them). I would guess that in the last five years alone there have been an additional 7-8 million new AR-15s in civilian hands, plus who knows how many AKs, AR-10s, Mini-14s, and various other semi-auto firearms capable of using a "high capacity" magazine.

So let's pretend little Robert Francis "Beto" O'Rourke manages to win the nomination, then beats Trump ( 😁) and then enacts his gun "buy back" scheme. Virtually no one is going to comply so that little weasel President O'Rourke would then be faced with a choice. Either let gun owners thumb their noses at the law or start ordering cops to kick down doors, which would lead to a lot of dead civilians and dead cops. That isn't a threat, it is just realism. People startled in their homes in the middle of the night are likely to use force to defend their property and family and as the recent shooting in Texas shows, cops aren't always great about announcing themselves. Let's say for fun there are 20 million firearms "Beto" would demand owners "sell back" and that only a tiny fraction actually are "bought back". There are 1460 days in a Presidential term of office (not counting leap years). So 20 million divided by 1460 works out to 13,698 firearms to be seized every day of the year, including Christmas day, to get all of these guns "bought back" in President O'Rourke's first term.

Are cops going to be able to do any actual police work between kicking down doors and getting shot at by irate citizens?

How many local cops and sheriffs would even order these raids in the first place since many of them are elected officials and don't like attending funerals for their officers?

How many dead American citizens and dead cops is Beto willing to sacrifice to seize tens of millions of guns that account for a tiny fraction of all murders in a year (see: VIOLENT CRIME CONTINUES TO TREND DOWNWARD)?

While cops are out in the suburbs and the country kicking down doors, what do you think the fellas in the more vibrantly diverse urban areas are going to be doing while the cops are preoccupied?

So yeah, good luck with that "buy back" Beto but also this is your latest reminder that now is the time to be stockpiling firearms. You can buy canned and freeze dried food anytime but the window for buying firearms is closing quickly. 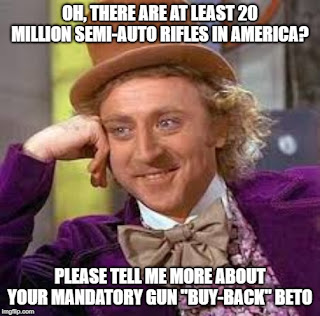 Something else I liked about the video from Anderson is that it shows you can make a quality product for a reasonable cost in the U.S.. A lot of people mock Anderson receivers as "Poverty Ponies" thanks to the horse logo engraved on the receiver but as far as I can tell, a $40 Anderson receiver does the exact same thing as a $100 Spike's receiver, minus the cool graphic. I am a big believer in the saying that you get what you pay for but that doesn't apply equally. If I am buying an optic for a rifle, some off-brand crap scope from Wal-Mart is not going to perform as well as a Zeiss. Off brand cereal simply isn't as tasty as name brand. But a gallon of 2% milk at the store is pretty much the same no matter where you buy it. I think the same is true for lower receivers for 99% of consumers. If you want to spend twice as much on a receiver because it has a cool graphic, good for you but don't mock others for lacking your vanity. A guy with an Anderson receiver on his AR that spends the extra $50 he saved on ammo to practice is more dangerous than the guy with the expensive receiver he can't shoot well.

Thanks to Anderson Manufacturing for making a quality product in America for Americans!
Posted by Arthur Sido at 9:22 AM