Trial By Social Media Outrage And The Politics Of Racial Solidarity

In an all too predictable move, the Georgia Bureau of Investigation (GBI) arrested Gregory and Travis McMichael, charging them with murder in the death of Ahmaud Arbery. I wrote about this Thursday and my position hasn't wavered: Arbery initiated the violence, escalating what was perhaps an ill-advised confrontation into a violent assault that resulted in his death. Regrettable but self-defense.

A person is permitted to use lethal force if they "reasonably believe" that that the force was necessary to "prevent death or great bodily injury" to themselves or someone else. A man repeatedly striking you in the head while simultaneously trying to wrestle away your gun is clearly intent on causing you great bodily injury, at the very least.

Why were the two men charged with murder?

The story took on a life of it's own Thursday and by the end of the day, after an enormous outpouring of social media outrage and politicians (including Trump and Biden) offering their own assessments, the GBI charged these two men with murder. Were they charged based on the evidence or because of the clamor when local prosecutors declined to charge the men? The answer is most likely that it was political.

The pragmatic reasons are simple but sure to upset normie "conservatives" if  you mention it. A failure to arrest these men for murder would have almost certainly led to rioting and looting. In Indianapolis yesterday, two black men were fatally shot by cops and both of them were armed and at least one was actively shooting at a black cop before getting killed and still people were protesting. Protesting what? Are cops supposed to allow themselves to be shot to avoid upsetting the black ministers? As expected, the normal histrionics were written by "journalists" declaring another Black Body murdered in cold blood by the cops and of course they use a picture of the guy looking clean-cut, in uniform no less.... 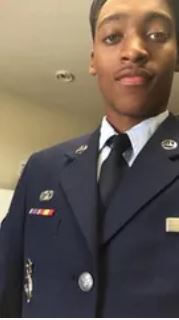 ....not one of his glowering Facebook pictures, flipping the bird or doing this charming pose. 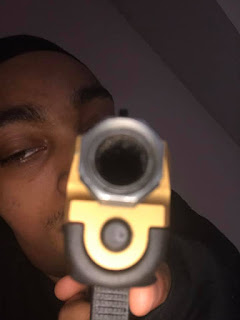 The old Trayvon Martin shtick, when the media used pictures that were many years old of a more innocent, fresh faced Trayvon instead of the older, glowering and posturing Trayvon with the extended middle finger and smoking weed. They are doing the same thing with Ahmaud Arbery. All of the news stories feature the same picture of him in what appears to be a prom outfit from high school..... 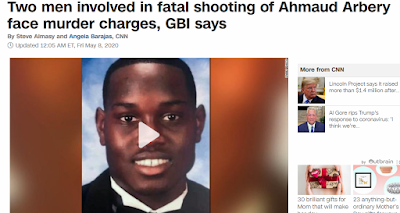 ...instead of the more recent scowling mug shot after Arbery brought a gun to the local high school and was arrested... 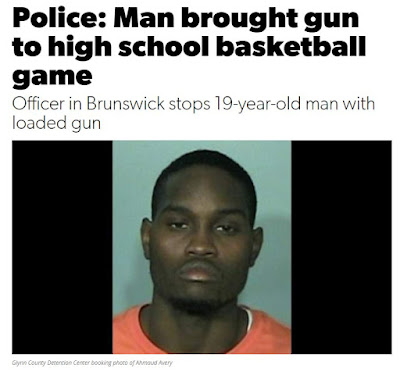 He doesn't look quite so friendly in this picture. Note, the caption and the story both call him "Ahmaud Marquez Avery" instead of "Ahmaud Marquez Arbery" but that appears to be an autocorrect function, as the picture is clearly of the same guy and the odds that two men with the name "Ahmaud Marquez" happened to be arrested at about the same time, with the same .380 pistol, in the same gym at the same age are astronomical.

The "no justice, no peace" chants come out whenever a black guy is killed, regardless of the justification for the shooting. In their eyes, a black man can do no wrong and all too often, if they fail to get the "justice" they demand, their protests turn violent.

I need to keep repeating this critical point. If Ahmaud Marquez Arbery had not attacked Travis McMichael, punching him in the head and trying to wrestle his shotgun away from him, he would be alive today. The whole thing was precipitated by him casing a construction site, not "jogging".

People get into confrontations all the time. The vast majority of the time, I would go so far as to say essentially all of the time, these confrontations don't end in violence. I wouldn't argue with you that the McMichaels maybe shouldn't have tried to confront him on their own, but their neighborhood had been victimized multiple times.

Confronting someone, yelling at them, being rude or an asshole isn't a crime. If it were, our jails would be full and our streets would be empty.

Assaulting someone, punching them in the head while trying to wrestle control of their firearm? That is illegal everywhere.

Meanwhile a new video has been released showing....exactly what the McMichaels were saying.

- Ahmaud Arbery is seen looking around furtively before going into a house under construction. Many construction sites have power tools left around and it sounds like this place had already been robbed before.

- A construction site is private property, just like your own home.

- He wasn't "jogging", he was strolling down the road.

- Someone sees him go snooping around the house he has no business being in and calls 911.

- Moments later, Arbery tears out of the house at a full run because he got caught and he knows the cops are coming. Now he is running but running away from a crime scene and "jogging" aren't the same thing.

- You can see the McMichaels getting into their truck.

- A cop drives past the house under construction

- Then a second cop goes flying down the road.


That narrative collapsed like Michael Moore after walking up a flight of stairs.

People are tired of being victimized by criminals and then waiting for the cops to show up. I don't blame the McMichaels for pursuing a man who was breaking into a house and I don't blame them for being armed.

The most critical issue to remember here:

Blacks shoot white people all the time and it rarely gets any attention from the media or celebrities. It is far more common than whites killing blacks but to hear the media tell it, the opposite is true.

The second most critical issue:

White people? Most of them, even "conservatives", immediately denounced the shooting, declared it murder and worthy of the death penalty because they are so deeply indoctrinated with the notion that white people are randomly attacking black people that they just assumed guilt and they wanted to signal that they are not "racist" even though those same people would likely enjoy an afternoon hanging out with the McMichaels and would lock their car doors if they saw Ahmaud Arbery on the streets.

You don't see white people demanding justice for another white person when they get killed by blacks. There is all sorts of room for subtlety and nuance and let's wait for the facts.

Even when a black commits a crime or was clearly in the wrong, his people will come out of the woodwork to explain why it wasn't his fault or that racism made him do it or that white people protesting in one city made two black men murder another black man for asking a woman to wear a mask in accordance with state law.

Their racial solidarity means that their people are always right and other people, especially white people, are always wrong.

This attitude is often infuriating but if I am honest, I am also a bit jealous of it. If I were to shoot a black guy and the situation was even mildly questionable, most white people would be at best silent and at worst would race to condemn me to signal that they aren't "racists".

What drives me especially crazy is that while blacks will provide excuses and go out of their way to deflect any blame from their own people, most whites can barely be counted on to give even the most basic benefit of the doubt to their fellow white people. The McMichaels said what happened and this video corroborates what they said.

Gregory and Travis McMichael are political prisoners and the Georgia Bureau Of Investigation tossed them in jail to placate social media protesters.

This was an obvious political decision, driven by the media. I am hoping that the GBI did what I suspect and overcharged these men with murder rather than manslaughter as the standard for murder is much higher and the clear act of self-defense should be enough to see them cleared of the charges. At the least they should be granted bond and released pending trial as they are not a flight risk. This news story is going to quickly disappear.

Someday white people are going to figure out that no matter how much they try, they will still never get a pass on "racism" and if we don't start to stand up for one another, and at least give each other the benefit of the doubt, we will all perish and civilization with us.