These kind of stories are common place in America's diverse urban neighborhoods but this one got special attention because of the coronavirus twist.

3 charged in killing of store security guard over virus mask

Calvin James Munerlyn, a 43 year old security guard at a Family Dollar store in Flint, Michigan was following the directive of Michigan governor/harpy tyrant Gretchen Whitmer's executive order requiring everyone, both employees and customers, in grocery stores to wear a mask. The rule is dumb but that is the rule.


A 45 year old black woman, Sharmel Teague, got into an argument with Mr. Munerlyn because Mrs. Teague's daughter was not wearing a mask and was told by Mr. Munerlyn that she had to leave. Again, not his rule but it is the rule in Michigan. According to reports Mrs. Teague was verbally hostile and at one point spit on Mr. Munerlyn, because that is what civilized people do. As a result she was refused service and told to leave the store.

She left but her husband and her son decided to go back to confront Mr. Munerlyn because he "disrespected" Mrs. Teague, even though he was just doing his job and she spit on him. Her husband, Larry Edward Teague, and her son, Ramonyea Travon Bishop, confronted Mr. Munerlyn and Bishop allegedly shot Mr. Munerlyn in the back of the head, killing him. Mr. Munerlyn is the father of six.

Mrs. Teague has been arrested. Her son and husband are still at large.


As is often the case when vibrant diversity expresses itself, the men being sought in the slaying already conveniently have mugshots:


Yet another ugly story where someone feels "disrespected" and decides to rectify the matter by shooting someone. These sorts of crimes are almost exclusively found in the black community.

What is strange is that the early story from the Associated Press linked above included this little snippet...

On Thursday, gun-carrying protesters and other demonstrators rallied inside the state Capitol, calling for coronavirus-related restrictions to be lifted. Some protesters with guns — which are allowed in the statehouse — went to the Senate gallery. Some senators wore bulletproof vests.

This was picked up by a number of other news outlets reporting on the story, like this one from Pittsburgh.

What exactly is the connection between a group of mostly white men legally carrying firearms and lawfully and peacefully protesting at their state capitol and a couple of black men murdering a different black man because they thought he "disrespected" a black woman, an act which I am pretty sure is illegal in all 50 states and the District of Columbia?

Not A Single Damn Thing

The issue wasn't the wearing of masks and the murder wasn't in response to protesters expressing their disapproval of Gretchen Whitmer's overreach. The issue was a man doing his job as a security guard, and oddly it is only in heavily black areas that dollar stores have security guards. In my nearest Dollar General, you often can't even find an employee anywhere.

Remember also that after Sharmel Teague yelled at Mr. Munerlyn , she left and then her husband and son, apparently unrelated, came back and at least Mr. Bishop brought a gun with him. This wasn't a spur of the moment thing, they intentionally went back to the store with the intent of at least confronting Mr. Munerlyn and likely with the intent of killing him because he "disrespected" Mrs. Teague, even though it was Mrs. Teague who spit on Mr. Munerlyn. They had plenty of time to think about what they are planning and still chose to go to the store and gun down a father of six because he was trying to enforce the rules and policies of the state of Michigan and his employer.

Among far too many black men, it is a reasonable response to what at the most amounted to poor customer service by returning to the retailer with a gun, intending to shoot a man. While many shootings in the black community are over drug gang disputes, many are also the result of personal insults and slights that turn violent and often deadly.

There is certainly plenty of anecdotal evidence to support that claim. Just recently a young black man, Tony Cushingberry, in my own state of Indiana was apparently irate at not getting his stimulus check, and blamed it on his postal carrier Angela Summers, a 45 year old white woman, who was temporarily not delivering to his address because of a dog that was out of control. So he did what any rational person would do.... 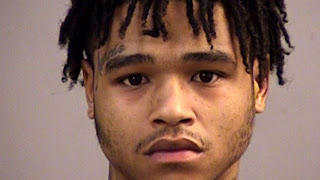 Reports indicate that he followed her on her route and fatally shot her in the chest, although he only intended to "scare her". Rational people don't follow a postal carrier and point a gun at her to "scare her" because sensible people know you don't point a loaded gun at anyone unless you intend to shoot them. There are a whole bunch of steps to take to resolve the issue of not getting your mail but pointing a gun at a postal worker isn't one of them.

We didn't have any "armed protests" in Indiana but still a young black man decided to respond to a frustrating situation by shooting an unarmed woman. Clearly the issue of men protesting peacefully in Lansing and a black man shooting another black man in the back of the head are completely unrelated.

So why would the AP mention it?

There is no reason other than two that I keep coming back to:

- Bringing it up deflects some attention from the endlessly litany of stories of black on black violence by creating a false equivalence between white violence and black violence.

- It also serves to make a peaceful protest seem more ominous and threatening. People on the left were hysterical about the protest even though there was no violence and no one thought there would be. Tens of millions of Americans carry firearms legally every day and they are virtually never involved in violent crime.

The men protesting in Lansing have no responsibility for two black men murdering another black man in a dispute over a perceived lack of sufficient respect. None.

When a black guy decides to murder a black guy, the only person to blame is the black guy pulling the trigger. It isn't the fault of "systemic racism" or the lingering effect of Jim Crow laws or poverty. It is a man deciding to resolve an issue by killing someone else.

The AP knows this and they lie anyway because they are no longer interested in reporting the actual news.
Posted by Arthur Sido at 11:50 AM