The Curious Case Of Ahmaud Arbery

There was a blurb in the news yesterday that Joe Biden, or whichever staffer runs his social media accounts, was calling for a "swift, full, and transparent" investigation into the "murder" of Ahmaud Arbery. 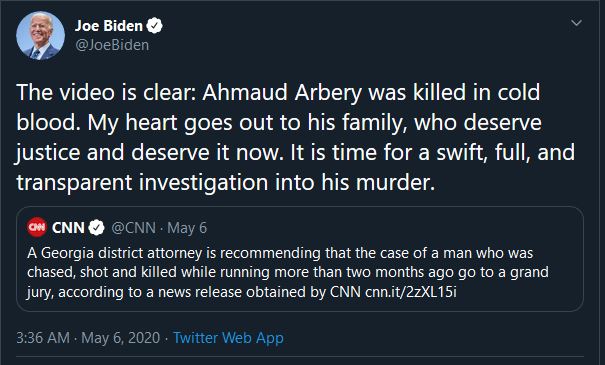 I wonder why we need a trial since Joe Biden's social media staff declared via his official twitter account that it was "clear" that Ahmaud Arbery was "killed in cold blood"? Maybe the better policy would be to let the legal process run it's course. If we start convicting people based on social media, maybe a certain former Vice-President and Senator from Delaware might find himself convicted of sexual assault?

I had no idea who Ahmaud Arbery was so I started looking into it and there is what appears to be a handheld video of the incident from a car that came on the scene. No surprise, the video was apparently initially published by fake black guy Shaun King, aka Talcum X. Here it is for your own review. Please watch it closely and without prejudice if you can and watch it multiple times, the critical segment is from about the 15 second mark to the 30 second mark.

What the 36 second video shows is a black man running down the street toward a white pickup truck. that apparently had been following the black man, Ahmaud Arbery. The truck is stopped in the middle of the road with the driver standing outside of his vehicle and another man in the bed of the truck. Mr. Arbery runs around the passenger side of the vehicle, around the front at full speed and then we lose sight of him for a moment. As he emerges on the driver's side of the vehicle we hear a gun shot and then see Mr. Arbery trying to wrestle the shotgun away from the driver. 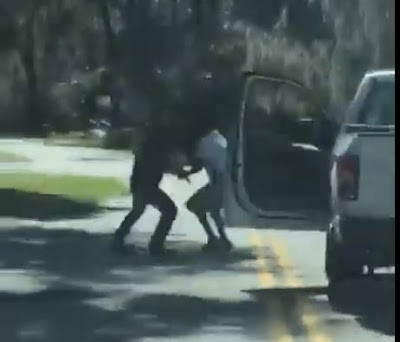 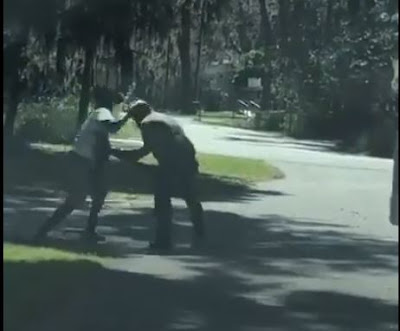 Then another shot rings out and Mr. Arbery finally lets go of the shotgun and starts to run away before collapsing.

The background information is as follows.

There were apparently a number of homes that have been broken into in this neighborhood recently.

Someone had just reported a black man in a partially constructed house, wearing a white t-shirt, who took off running in a 911 call.

The two men in the video, Gregory and Travis McMichael (a father and son), grabbed firearms, a shotgun and a handgun, jumped in their truck and went to see what was going on.

Gregory McMichael was a former investigator for the district attorney's office for 30 years, which complicates the investigation for obvious reasons and before that he was a police officer in Glynn County.

The men claimed they attempted to ask Mr. Arbery what he was doing. According to local Brunswick news, they said: “’Stop, stop, we want to talk to you,’”. Later they again tried to talk to Mr. Arbery who kept running, reversing course. Finally they stopped and one man got out of the vehicle, Travis McMichael with the shotgun in hand, but as far as I can tell from the video he never pointed the shotgun at Mr. Arbery prior to being attacked. More from the Brunswick news:

“McMichael stated he saw (Arbery) begin to “violently attack Travis and the two men then started fighting over the shotgun, at which point Travis fired a shot and then a second later there was a second shot,” the report stated. “McMichael stated the male fell face down on the pavement with his hand under his body.”

Mr. Arbery bled out on the scene after being struck at point blank by a shotgun.

While not known to the McMichael's, the 25 year old Mr Arbery has had a number of run-ins with the law. From the New York Times...

Arbery was arrested in December of 2012 by Glynn County Schools Police for bringing a handgun into the Brunswick High gymnasium during a basketball game. When an officer spotted the .380 caliber handgun in his waistband, the then 19-year-old Arbery attempted to flee.

At least two adult criminal convictions for a 25 year old man. That doesn't make him guilty of breaking into homes of course but it does speak to his character and it bolsters the claims that he initiated the violent assault that led to his death.

What we have is a racially charged shooting. Many people have already declared that the two men are guilty because they are white and the man they shot is black. The case is taking on a life of it's own, which is ominous for the McMichael's. Celebrities are of course weighing in, like this moronic statement from overrated LeBron James. 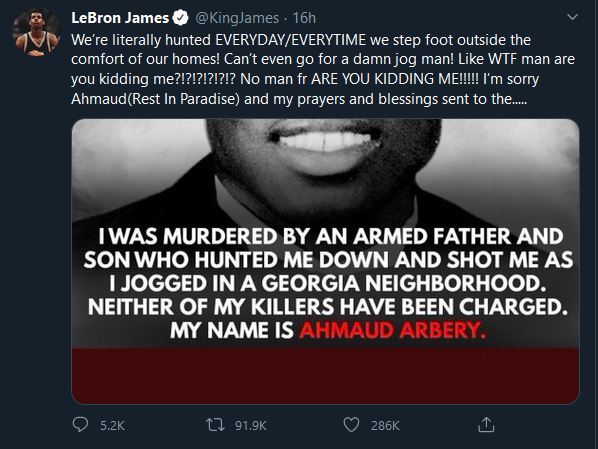 Literally hunted. You have to be a special sort of stupid to believe this. No one is "hunting" black men and in contrast 90% of interracial violence in America is black on white, even though whites outnumber blacks by a significant margin. If anything, white people are in far more danger from blacks than the reverse (see: The Most Important Government Report You Will Never Hear About). Again, no one is "hunting" blacks. No one is "lynching" blacks. Blacks are mostly killed by other blacks. And still we see people repeating charges like "We're literally hunted EVERYDAY/EVERYTIME" whenever blacks leave their homes.

It isn't just creepy politicians and moronic sportsball players who are declaring this to be cold blooded murder. Even "conservatives" are jumping at the chance to virtue signal: 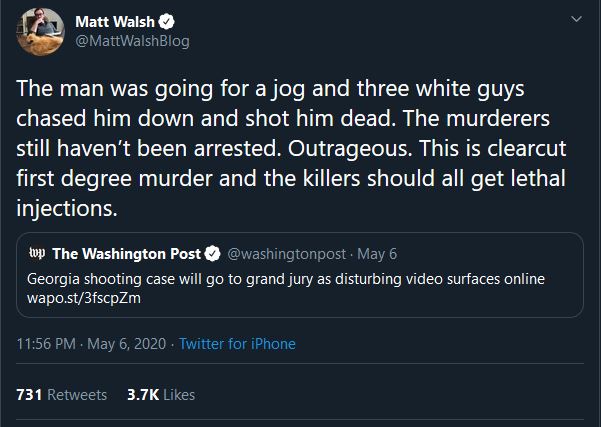 Once again, who needs a trial? These guys are guilty and should be executed! That is conservatism in 2020 in a nutshell.

Walsh is a pretty solid contra-indicator who can be trusted for a bad take on just about every issue, just as long as he can keep mouthing safe platitudes and avoid getting a job, he will be happy. He stepped back a bit when people were calling him out but this was his initial response.

Then "conservative" former Congressman Trey Gowdy went on Fox News to declare this to be an outrage and another sign that blacks don't get a fair shake from the justice system.

While I certainly bring my own bias to the table, and we don't see much of what happened, I don't see this as a criminal act.

Mr. Arbery attacked Mr. McMichael. The act of holding a shotgun is not criminal but if someone tries to grab it from you, you are rightly understood to be concerned about your safety. If Mr. Arbery had gotten the shotgun away from Mr. McMichael, what would he have done? I wouldn't wait to find out either.

I understand that blacks faced discrimination in the past and still occasionally do in places today, although not anywhere near the level we are supposed to believe. What would I have done in Mr. Arbery's shoes? I would have asked the men following me what they wanted. I might have done so with some colorful language but I certainly wouldn't have attacked the man holding a shotgun because that is a terrible idea, and I wouldn't have kept attacking him once the shotgun was discharged initially.

Were these men being jerks? Maybe, although given the circumstances you can understand why they were looking for a man spotted lurking around a construction site who then took off running. Are they "racist"? Possibly but that also isn't a crime. Is it wise to chase down someone you think might be a potentially dangerous criminal? Again maybe not but those who say "They just should have called the police" don't seem to care that it could take the police a while to show up.

The case has raised parallels to the Trayvon Martin shooting. As in that case, someone being unarmed does not mean they are not dangerous. In the case of Martin, he confronted George Zimmerman, punched him in the face, got on top of him and continued to beat him. Zimmerman had a bloody nose and blood on the back of his head. You can easily kill someone with your bare hands. In the case of Ahmaud Arbery, he was trying to wrestle a shotgun away from Travis McMichael while also repeatedly punching him. From what we can see on the video, Mr. Arbery initiated the violence and continued even after the shotgun discharged once. Whatever the circumstances leading to the shooting, if you attack a guy with a shotgun and try to take it from him, you are going to get shot more often than not.

Maybe Mr. Arbery was indeed just jogging. Maybe he was the one who was breaking into houses in the area. Either way, he escalated an already tense and dangerous situation and attacked an armed man. That is an act that is probably going to end up with someone getting shot.

We will likely never know the truth here but the video shows compelling evidence that Mr. Arbery initiated the violence, continued to assault Mr. McMichael and died as a result. He was not "hunted down" and shot, as if he were simply wandering down the sidewalk. The McMichael's tried to initiate contact with him on at least two occasions. Again, maybe they were jerks about it but being a jerk isn't against the law.

If you try to take my firearm from me while punching me in the head, I am going to assume you intend to shoot me with my own gun and I would have done the same thing and defended my life with lethal force.

Mr. Arbery found out the hard way and too late that letting your temper get the best of you and attacking an armed man is a great way to end up in an early grave.
Posted by Arthur Sido at 11:06 AM