Everyone Else Should Pay For My Poor Decision Making!

The Democrat primary contest is not just a clown car crossed with a dumpster fire with a spoonful of trainwreck. It is also rapidly devolving into a bidding war to see who can offer the most "free" stuff to bribe liberal primary voters. Andrew Yang is proposing a Universal Basic Income of $1000 a month but that is child's play because it isn't nearly enough money and it doesn't punish the right sort of people. Yang is obviously not serious about winning. A better scheme comes from Cory "Spartacus, I totally don't have sex with men" Booker. He is proposing some sort of reparations, the issue du jour for liberals. Elizabeth Warren is proposing reparations and a huge student loan bailout. Bernie Sanders, not to be outdone by Fauxcohontas trying to out-socialist him, just proposed "canceling" all outstanding student loan debt. That is about $1.6 trillion dollars. Let's spell that out:

Dats a lotta zeros. I like how he calls it "canceling the debt" as if student loan debt is just some fictional concept, instead of representing funds that have been borrowed by adults and funds that have already been spent by universities. We are just going to "cancel" it. Poof!

Actually Comrade Bernie says he is going to make Wall Street pay for this bailout. That is about as believable as Trump saying he was going to make Mexico pay for his (non-existent) wall. Wall Street owns the Democrat party as well as the Republican party. Let's look at the leadership of the Republicans and Democrats in the Senate, Majority Leader McConnell and Minority Leader Schumer (courtesy of OpenSecrets.org )....

So they each have securities and investments, in other words "Wall Street", as their top donor industry to the tune of over $5 million between the two of them. Now let's look at the ranking members of the Senate Committee on Finance which overseas taxation, Republican Chuck Grassley and Democrat Ron Wyden: 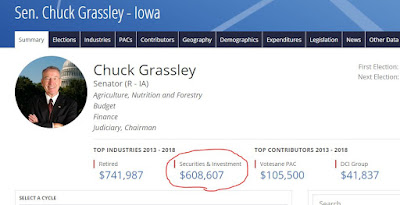 Chuck needs to up his fund-raising game but in fairness he also is from Iowa, but Senator Ron Wyden has pulled in over $2 million from "Wall Street". What about in the House Ways & Means committee (they oversee taxation in the House)? Here is Democrat Chairman Richard Neal and Republican Kevin Brady, also from Open Secrets: 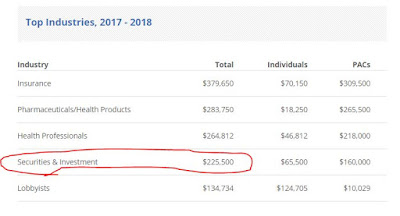 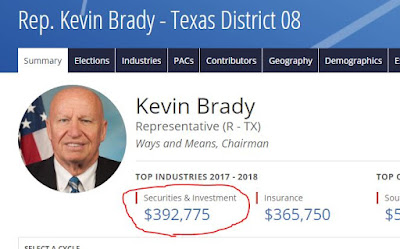 I am sensing a pattern here. It is almost as if the securities industry knows who to bribe support to protect their profits.

Please tell me more about how the U.S. Congress is going to vote for these huge donors to take a $1.6 trillion loss without some sort of backdoor compensation from the government. No, what is going to happen is that the taxpayers will end up on the hook for this debt in some way, shape or form. As always. That is the epitome of a regressive tax.

A lot of people who pay taxes didn't go to an overpriced university. They either didn't go on in their schooling after high school or they took affordable classes to learn a trade at a community college. They are middle class people with families and mortgages and car payments but they are apparently supposed to be taxed to bail out people who irresponsibly took out student loans for bullshit degrees that have no value in the marketplace. A prime example is this dame, Heather Gautney. Her profile on Twitter is about what you would expect: 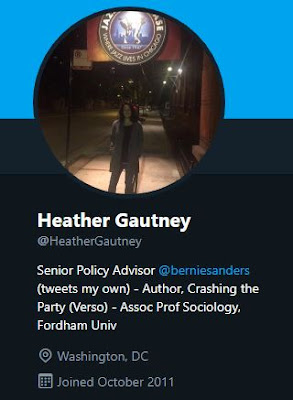 A far left college professor? Didn't see that coming. Anyway, she tweeted this out yesterday in what might be the biggest self-own on social media this month: 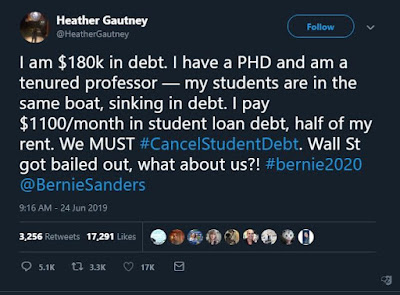 So, she got herself $180,000 in debt to get a PhD in sociology which is in the top tier of most useless degrees at any university. There isn't really much calling for sociologists in the work force unless you are teaching that useless subject to other dolts. Boohoo, you went in debt to get a degree with no demand in the marketplace. But you get a tenured professor position at Fordham, which I assume pays very, very well for minimal work. Sadly you decide to teach at Fordham which is in New York City so you go to Twitter to whine not only about your $1100 monthly student loan payment but also that you are dumb enough to live somewhere where rent on an apartment is $2200/month. She should be required to stand on street corners in NYC wearing a sandwich board declaring "I iz dumbz". Instead she is a professor teaching young idiots the same meaningless "academic" discipline that she learned at a school with an annual tuition of $53,000, and also working as a "Senior Policy Advisor" for Bernie. Someone clueless advising Comrade Sanders, shocking! Here is a list of the courses Ms. Gautney teaches when she is not whining on Twitter:

Inequality in America, Transnational Social Movements and Political Sociology on Film. Wow, that is some hard hitting academics right there. Let's look at that last one in detail (from the Fordham webpage)

Film has played a central role in shaping the political landscapes of the 20th and 21st centuries and our collective understanding of them. The objective of this course is to enable students to read and analyze global and domestic politics through the medium of film an provide them with a firm grasp of theoretical and empirical issues in contemporary world politics from a sociological perspective. This course makes use of documentary, short-, and feature-length films to interrogate key themes in political sociology and analyze the most important political developments of our time. It also aims to provide students with an appreciation of the complex relationship between art and politics, history and mythology. Substantive areas of study will include: (1) terrorism and war (including civil war, military intervention, and the Cold War); (2) globalization, human rights, and "development"; (3) transnational and domestic social movements; (4) democratic and undemocratic political regimes; and (5) colonialism and imperialism. Readings will be drawn primarily from the field of sociology, but also from political science, history, and film and cultural studies. Four-credit courses that meet for 150 minutes per week require three additional hours of class preparation per week on the part of the student in lieu of an additional hour of formal instruction.

So they watch movies and read books about movies and analyze how those movies reinforce their existing political beliefs. No wonder you pay a decent annual salary in tuition every year for solid academic work like that. It is hard to believe that people that study nonsense like this, and it is complete nonsense, can't seem to find gainful employment.

Again, plumbers and store clerks and truck drivers are supposed to pay higher taxes to bail out someone that is such an idiot that they went almost $200,000 in debt for a useless degree and that chooses to live in one of the most expensive cities in the world paying more than double in rent than what a normal person pays for a mortgage. Not to mention the fact that the people who are going to disproportionately benefit from this are white professionals with college degrees and the optics of Mexican carpenters and black janitors getting taxed to bail out white liberals is awful.

You could make student loan debt something that is included in bankruptcy filings, that might help. Right now it is simultaneously as easy as pie for an 18 year old with no credit history and no job prospects to borrow $100,000 unsecured and at the same time it is impossible to discharge that debt no matter what happens. If you get into credit card debt or unexpected medical bills, you can declare bankruptcy. That is devastating to buying a house or even getting a job but it is a last resort. Student loans? You can never get away from them and the government can garnish your wages or your tax refund at will.

The student loan thing is a hot mess, no doubt. So is the credit card debt situation and the public pension underfunding and the looming insolvency of Medicare and of course the $22 trillion dollar existing national debt. The solution is going to be painful and just waving your magic socialism wand and "canceling" that debt isn't going to fix it because as soon as you do, students will start taking out new loans and colleges will keep inflating their prices double digits every year and the cycle starts right over again. The government can't fix the student loan crisis because the government caused it by creating an artificial lending environment where kids who have no business getting hundreds of thousands of dollars in unsecured loans are getting them anyway. That artificial lending environment upends the normal underwriting process where risk is a significant factor in loan approval. When there is no risk, there is no reason to not approve a loan. The only student loans that should be extended to students are loans for degrees with reasonable expectations of leading to jobs that will allow the student to make good on the loans (engineering, nursing, accounting, etc.). You should have to apply for a student loan and have that application submitted to underwriting standards like any other loan. If you can't make the case that your degree will lead to a high paying job, you don't get a loan which is how loans are supposed to work. More on this topic: Nothing Is Free.

Obviously the people cheering on #CancelStudentDebt have not given any thought to the ramifications of wiping out $1.6 trillion in student loans, whether that somehow means forcing "Wall Street" to take a huge hit which means that banks will stop offering student loans and students won't be able to afford the inflated cost of college or more likely that tax-payers will get saddled with the bill. They haven't thought about the ramifications because they are incapable of critical thought, and that is by design. All they are capable of thinking about is "I have a bunch of debt and it is a drag. I don't want to have this debt. Bernie says he will make it go away. I'm voting for Bernie". That is all the more complex of a level their thought processes are capable of operating on and again that is by design. Having a problem and making someone else fix it is precisely what Bernie voters are looking for. They are owed everything and they have responsibility for nothing.

Bernie isn't going to be the nominee. I think his support has a pretty hard ceiling at 30% and Elizabeth Warren is peeling off his supporters by proposing many of the same things while be less honest about being a socialist. What he is doing is moving the discourse to the Left. He is staking out a crazy position and that requires all of the other candidates to respond with their own slightly less crazy plans. We still have more than half a year until the first votes are cast, it is going to be a lot crazier in Clown World.