Most Americans are a lot like hobbits when it comes to eating. Once we have finished a meal, we start thinking about the next one.

That is a nice luxury, although it is responsible for the widespread epidemic of obesity in America. It is also a system that relies on cheap, reliable transportation to keep the shelves stocked. That system is far more fragile than most people realize. Case in point:

African Swine Fever is killing millions upon millions of pigs all over the world, and this threatens to create a crippling global shortage of protein as we head into 2020.  This epidemic began in China last year, and it is now also running wild in North Korea, Vietnam, Laos, Cambodia, Myanmar and the Philippines.  But this crisis is certainly not limited to Asia.  According to the Washington Post, so far in 2019 there have also been outbreaks “in Belgium, Bulgaria, Hungary, Latvia, Poland, Romania, Russia and Ukraine.”

Overall, cases of African Swine Fever have been documented “in nearly 50 nations”, and U.S. pork producers are extremely concerned that it could start spreading here too.

So that is pretty cheery. Sure ZeroHedge can be a Chicken Little site much of the time but this isn't the case here. The swine flu and the massive culling of swine herds is a real thing and since food is a global commodity, something like this can't help but impact pork prices, and by extension all meat and food prices, in the U.S.

A serious disruption to the food supply could be a trigger for widespread instability. That is why Grub is one of the 4 Gs of investing in 2020 (for more see: The Four Gs Of Investing In 2020).

With that in mind, I am sharing in it's entirety a lengthy section from Ol' Remus at The Woodpile Report from October 22, 2019. The Woodpile Report comes out once a week, normally on Tuesday, and should be required reading. This is a pretty long snippet so I will share it after the break with no comments from me, hopefully with all of the formatting intact. Enjoy.

Food is a weapon.


As in all war, food would be weaponized in a Civil War II. We don't have to go back to antiquity for examples, more recent events provide a long list, some of which are:
United States

Sherman's "scorched earth" campaign began on November 15th [1864] when he cut the last telegraph wire that linked him to his superiors in the North. He left Atlanta in flames and pointed his army south. No word would be heard from him for the next five weeks. Unbeknownst to his enemy, Sherman's objective was the port of Savannah. His army of 65,000 cut a broad swath as it lumbered towards its destination. Plantations were burned, crops destroyed and stores of food pillaged.
Germany

The average daily diet of 1,000 calories was insufficient to maintain a good standard of health, resulting by 1917 in widespread disorders caused by malnutrition such as scurvy, tuberculosis, and dysentery. In December 1918, the National Health Office in Berlin calculated that 763,000 persons had died as a result of the blockade by that time.
Ukraine

By the fall of 1932 it became apparent that Ukraine’s grain harvest was going to miss Soviet planners’ target by 60 percent. Stalin then ordered what little they had be confiscated as punishment for not meeting quotas.

The Ukrainian famine by one estimate claimed the lives of 3.9 million people, about 13 percent of the population. In June of 1933, at the height of the Holodomor, 28,000 men, women and children in Ukraine were dying of starvation each day.
Great Britain

Britain imported 70% of its food; this required 20 million tons of shipping a year. Knowing this would lead the Axis powers into hoping to starve the British population into submission, by cutting off those food supply lines. By the end of 1940, 728,000 tons of food making its way to Britain had been lost, sunk by German submarine activity.
Netherlands

In September 1944, trains in the Netherlands ground to a halt. Dutch railway workers were hoping that a strike could stop the transport of Nazi troops, helping the advancing Allied forces. But the Allied campaign failed, and the Nazis punished the Netherlands by blocking food supplies, plunging much of the country into famine. By the time the Netherlands was liberated in May 1945, more than 20,000 people had died of starvation.
Japan

The problem was not just harvests and the cutting off imports, transportation problems developed. Fuel shortages made it increasingly difficult getting food from the countryside into the cities. Food Shortages had begun to appear in some parts of the country even before Pearl Harbor.

By 1944 theft of produce still in the fields led police to speak of a new class of "vegetable thieves" and the new crime of "field vandalizing". The average calorie intake per person had by late 1945 declined to far less than deemed necessary even for an individual engaged in light work.
Berlin
Stalin's blockade of Berlin from June 1948 through May 1949 was an attempt to starve West Berlin's two million inhabitants into accepting Soviet rule. The city quickly devolved into near-famine. A largely American airlift rescued it and kept it alive. 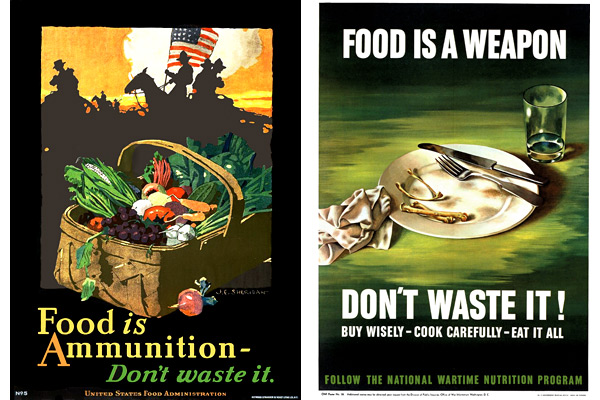 Posters from World Wars I and II

The US has historically used food as part of carrot-and-stick diplomacy, or said differently, bribes. During the Second World War, Great Britain and the Soviet Union relied crucially on American food, assuring a measure of their dependency in power negotiations. Germany, and particularly Japan, were nearly US territories after the war, both would have starved without prompt delivery of American food in quantity.
Wars are generally about food. Ancient Rome imported its food and fought epic wars to develop new sources and keep the ones it had. Medieval fiefdoms were agricultural enterprises, raiding their neighbors was common. The westward expansion of America in the nineteenth century was about food and the means to move it, as was Japan's expanding empire in the early twentieth century. Germany explicitly cited food production to justify its aggression in the east. Their rants about fighting Bolshevism was pep rally stuff, Nazism itself was excessively patriotic Marxism.
History and cold calculation suggest food would be a weapon in a Civil War II, one of many, but of prime importance long term. Civil wars have long gestations, go kinetic suddenly and get complicated in a hurry. We have no firm knowledge what would set it off, who would be actively involved or how it would end. But the outlines are repeated well enough to guide our preparations.
The ruling class already treats middle America as this century's Untermensch. Nothing is off the table in a civil war. Seizing the nation's food would be an obvious move. Expect them to deploy troops to secure big ag and the necessary transportation facilities, destroy anyone who got in their way and terrorize potential troublemakers. But there's a limit to even the deep state's resources. Prudent survivalists in the far hills wouldn't warrant their attention, they'd be more likely to trade shots with desperados than find themselves in a firefight with regular forces.
Food is the indispensable survival prep. At minimum this means a secure long-term stash of high calorie food sufficient to outlast the initial violence and privation without relying on resupply. Call it a year, maybe two.
Preppers are kidding themselves about large, elaborate enclaves. Such communities with their gardens, livestock, solar powered utilities, weapons, comms, storehouses, workshops, tools and supplies would be fatally attractive. Training with light infantry tactics and weapons is understandable, but repelling serial attacks by gangs and other armed opportunists would include attrition, i.e., the worker bees would win battles but eventually too few would remain to run the place. And when it became unviable, so would they.
Such redoubts have their place when the meltdown eases, but in the initial phases, less is more.
Well placed and practiced survivalists could get by on a onesey-twosey basis. Two may survive where one wouldn't. Three or four may be better, assuming an adequate reserve of food and supplies. With more than four the liabilities are likely to outweigh the advantages. It assumes the deepest of deep larders, extensive supplies and harmonious wisdom in all things. Unless each make an irreplaceable contribution of critical value it's probably too big a footprint for this phase. Loosely allying with similar small groups for mutual benefit may be the better choice. Five or more is a crowd, a danger to itself.
Famine is a given in contemporary civil war. Those embedded in interior cities have no chance, so, next item. The ruling class would continue to work against middle America's existence. As said above, they'd confiscate local stores of food on a continuing basis, seize major food producing areas intact and grab the needed transportation facilities. Make no mistake, their hirelings would be granted license for absolute ruthlessness. Free fire zones and minefields are not off the table. Skilled labor, if otherwise unwilling, would be arrested and compelled to work.
Feeding their base would guarantee the loyalty of supporters, inflict mass death on the deplorables by 'no cost' neglect and keep armed confrontation largely confined to flyover country. But note, as said here before, this is a precarious solution. The coastal megacities are fed from the outside by vulnerable arteries passing through what would be hostile territory. In the end, feeding them would stutter and fail. Even now they're cauldrons of seething hatred, barely repressed, often organized. With real scarcity and hardship they'd fall on each other and tear the place apart.
Privation, disease, hunger, murderous chaos and high intensity combat would likely peak in the second year. This is the knothole which would separate the survivalists from dabblers and hopeful idealists. In the years that follow, when the maelstrom had largely exhausted itself and the situation clarified, those who made good use of their resources could be largely self supporting, coalescing into tribes, forming families with neighbors and partying like it was 1319.
Be a survivor. The who and what of a civil war would matter only occasionally. Food would matter every hour of every week. Stack food high, wide and deep where it's secure from looters and confiscation. Backup your stash with an "iron rations" fallback stash. Stack seeds, garden tools, fishing and hunting gear to be prepared for self-resupply opportunities. Calories are life.