Their Intentions Have Never Been More Clear

Ever since a drug addled violent criminal with heart disease named George Floyd died while resisting arrest following the commission of the final crime of a lengthy criminal history, as a nation we have been told that the real problem in the criminal justice system in America is not the criminal element in our society, something we understood to be the root cause of crime for as long as we have had a civil society. Instead we were now told that the problem is the police.
That America has a violent crime problem, a BIG problem, is apparent to everyone. Likewise it is painfully clear that while the vast majority of Americans are responsible owners of the billion or so firearms in America, too many are not, including most notably a significant chunk of one minority group. So far in 2022, less than four full months into the year (and it has been cold across much of the country most of 2022), there have been 5,533 homicides and other various deaths by gunfire (not including suicides) according to the Gun Violence Archive. 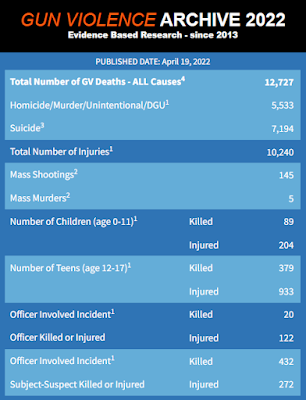 As of the first chart we are just about 30% of the way through the year with 5,533 murders which works out to around 18,400 murders for the year but again we are not even to the prime murder months in America in the summer when the inhabitants of the northern cities like Chicago, Philadelphia and Baltimore really start enriching their cities with vibrant diversity in the form of stolen Glocks and Hi Points.
The trend is an upward one. From a recent "low" of "only" 12,418 murders in 2014 (a pace of over 1000 murders per month!) we have seen a steady increase to the explosion of 2020 with over 19,000 murders. This coincides, not cohencidentally, with the Floyd-inspired and other riots and the "Defund The Po-leece!" movement. 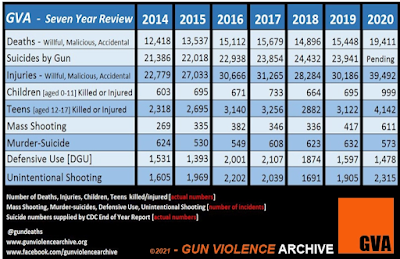 In response to accelerating violent crime, most often using guns, the "solution" being proposed by the puppetmasters pulling the strings of Biden, Schumer and Pelosi is two-fold.
Step One, push for more gun control laws that will only make it harder for law abiding shooters, mostly White men, to purchase firearms that are rarely used in crimes unless they are stolen.
Step Two, stop prosecuting people for breaking the existing gun laws because those laws result in lots and lots of black and brown men ending up in prison. 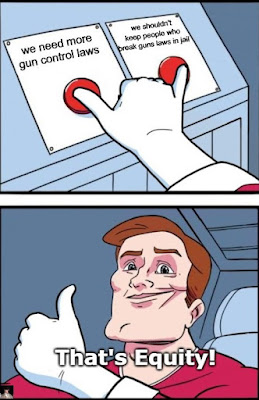 See how that works? This is the first Big Fact About Gun Control™ in America.
We need more gun laws to stop violent crime but we also need to stop prosecuting criminals who violate gun laws in the name of "equity".
It seems insane to Normiecons. Why wouldn't you just throw proven violent criminals in jail for longer sentences given how high the levels of recidivism seem to be? It is very, very common for people arrested in connection with a shooting to already have a prior conviction or three for a crime involving a firearm. What they don't and generally won't understand is the second Big Fact About Gun Control™:
Gun control proposals claim to be about reducing violent crime but are really intended only to disarm the American people, specifically White people.
The media gets giddy when blacks for shooting clubs or opens gun stores or become new gun buyers. But White people? We are the greatest danger to this country!
"They" used to pretend that they were up to something other than confiscation and disarmament but they aren't even pretending anymore and how can they when they are so obviously engaged in encouraging gun violence by putting known violent offenders back on the street via the revolving jailhouse door while claiming that new laws will accomplish what the laws they already refuse to enforce will not.
Even the densest normies are going to have to figure this out. Ask people who don't get it yet why they would call for more gun control and yet refuse to jail the people who are breaking the gun laws that already exist. Hopefully they can connect the dots.
Posted by Arthur Sido at 11:19 AM