Just in case you were hoping to sleep soundly tonight, the estimable Matt Bracken points us to this deeply concerning news story (HT: WRSA) 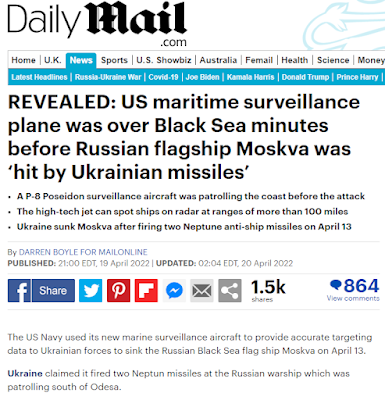 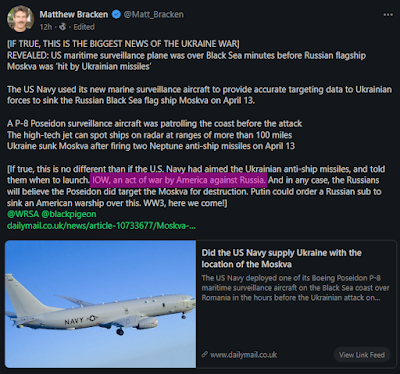 If this is what actually happened, it is only a short step away from pulling the trigger and sinking the Moskva ourselves. We supplied the missile, provided the targeting info and the precise time to launch. The Ukrainians only pushed the button. It would be like loading a gun, putting it in the hands of a gangbanger, pulling back the hammer, maneuvering his hands so the gun was against someone's head and then saying "pull the trigger".
To put it more bluntly, if Russia or China provided that sort of aid to Iran and North Korea and it resulted in the sinking of a U.S. warship, we would likely consider that an overt hostile action, an act of war.
Combining stupidity, incompetence and evil in the leadership of a nuclear power like the U.S. is a great war for us all to get glowie.
Posted by Arthur Sido at 8:43 PM