Fox News dolt Sean Hannity, the most cringe BoomerCon on prime time with the departure of Bill O'Reilly, declared that maybe it was time to assassinate Vladimir Putin.

Sean Hannity Calls for Putin Assassination as Ultimate Retardedness Intensifies
No surprise, Hannity isn't volunteering to pull the trigger nor will he or anyone in his family charge into combat against the Russkies. He just wants someone else to do it. I am sure that if we assassinated Putin, the Russian people would thank us and it wouldn't lead to a major escalation against the U.S. or any sort of retaliation. Hell, the worst thing the Russians could do to us is leave our current geriatric/insane leadership in place.
If I were the Russians and the U.S. assassinated Putin, that would be an overt act of war and the gloves would come off in Ukraine and also in Europe and the U.S. Cyberattacks shutting down the power grid, the banking system, hospitals, government systems. If they were really sneaky they would shut down the EBT food stamp card system and watch the ferals go ape-shit. Or maybe just drop a few megatons in the air over D.C. and call it a day. Maybe just a panel truck on the top deck of a parking garage in a few big cities with a low yield warhead. You can't tell me that they couldn't smuggle a nuke into the country.
Has Hannity considered this? Of course not. In the same monologue he talked about someone who invaded an innocent country and caused the death of women and children having forfeited his right to lead and even his right to life. The first person I thought of when listening to that description... 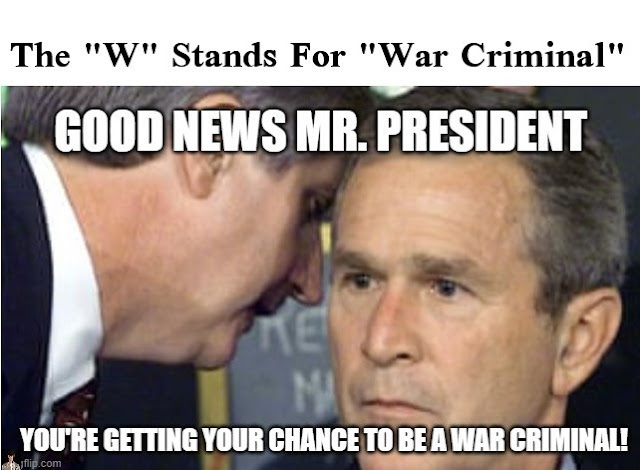 Hannity was a huge cheerleader of the Iraq War so he at least bears some responsibility for the hundreds of thousands of dead women and children. Maybe a decade in a prison would be appropriate for a war crime propagandist?
We really could use some sort of actual sober, intelligent leadership before we all get radioactive.
Posted by Arthur Sido at 6:14 PM