Speaking Of Most Wanted Lists

Also from American Renaissance:
Race and the FBI’s Ten Most Wanted
The majority of violent crime in America is committed by blacks. However, blacks are often underrepresented on “most wanted” lists. Hispanics almost always top these lists, as they do with the FBI’s Most Wanted Murderers and the FBI’s Most-Wanted Criminal Enterprisers. Intelligence is surely part of it. Violent crime doesn’t require much brain power but getting away with it, or at least avoiding immediate capture, does. Hispanics seem to occupy the “sweet spot” for making most-wanted lists: They are more crime-prone than whites and Asians, but more intelligent than blacks.
Right now, of the FBI’s Ten Most Wanted, seven are Hispanic, two are white, and one is an Asian Indian. There are no blacks.
I checked the FBI Top Ten list webpage to be sure and verified the list. 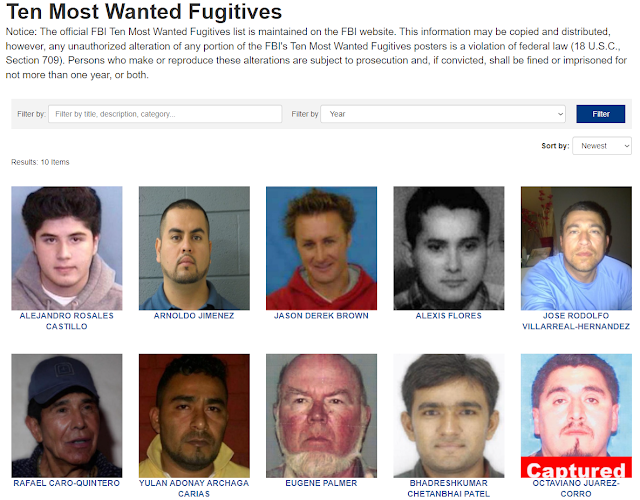 The two White guys are Eugene Palmer who allegedly killed his daughter-in-law 10 years ago when he was around 73 so he is 83 now, if not dead. The other White guy is much younger, Jason Derek Brown who killed a guard while robbing an armored car in 2004.
The biggest factor in the mestizos being "at large" is that they likely all fled back across the border or in some cases never were here in the first place.
What a blessing to America to have a steady supply of criminals just south of our border!
Posted by Arthur Sido at 11:45 AM