From Righteous Truth-Teller To A Squeaking Little Gerbil

Things move quickly in our woke, instant communication society. Nick Cannon got a taste this week. I posted just yesterday that Cannon was fired from CBS for his "antisemitic" comments, but not his anti-White comments: Nick Cannon Learned Some Lines Can't Be Crossed.

But by last night? He was groveling and debasing himself on Twitter in one of the most cringe-inducing apologies ever posted on social media. 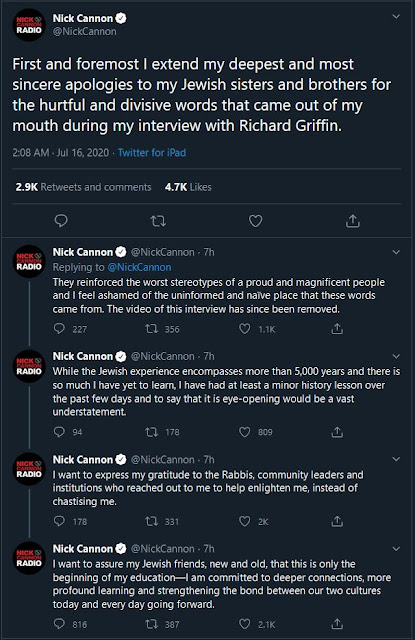 He gave up as quickly as France to any army speaking German.

Oh, and the original Youtube video has now been removed for "hate speech". Not against White people of course but for antisemitic rhetoric.

In the span of a week he went from Malcolm X reborn to a groveling little bitch. It isn't like he needs the money, the guy is a millionaire many times over, but he apparently can't stand the idea of not being in the spotlight.

Can you imagine a Marcus Garvey or Malcolm X prostrating themselves like that in order to try to salvage their "career" in "entertainment"? Even though their rhetoric was what we consider "hateful" today, I have far more respect for people with the courage of their convictions than some up-jumped clown who LARPs at being about black power but can be made to post such tearful apology in less than 48 hours.

Marcus Garvey and Malcolm X must be rolling over in their graves right now.

Meanwhile the host of what is apparently a popular radio program called "The Breakfast Club", a pretty obvious appropriation of White culture by a black man, Lenard Larry McKelvey who pompously styles himself Charlamagne tha God (more appropriation) had this to say:

However, he said that Cannon should have been careful to discuss his views about Jews with a Jewish scholar, who might have been able to correct any mistakes on the spot.

He also argued that each group is able to decide for itself what speech is offensive.

But Charlamagne also added that Cannon’s firing proved that Jews do, in fact, have “the power.”

How long before Mr. McKelvey issues a groveling apology? Also, does this whole thing reinforce or refute the stereotypes about Jewish power and influence?

What a clown world we are living in.