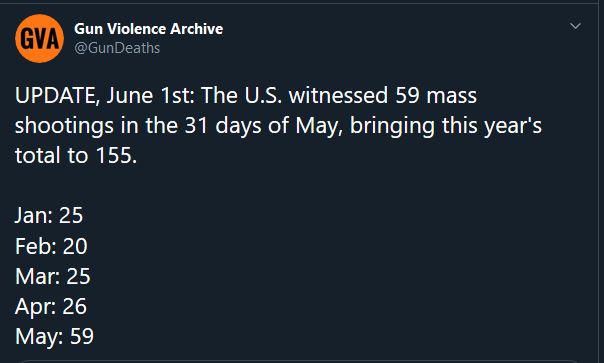 There were 59 mass shootings in May.

How many people heard about even a fraction of those? I pay close attention and I didn't recognize more than a handful of them.

The reason you don't hear about these shootings is what I have been saying forever:

Black Lives Matter only when they can be leveraged for political advantage.

It is as simple as that.

There are still news stories that reference mass shootings that happened years ago because the shooter was white or sometimes because they used a scary looking weapon. Meanwhile mass shootings happen every day in America and the media intentionally looks the other way.

Then think about how that fits into other events like the "protests" that are happening right now and how the media is covering them.

The pattern will show itself. What are you going to do about it?
Posted by Arthur Sido at 9:44 PM