Paltry Coverage For Paul And Lidia Marino But Coverage

We finally have a photo of Paul and Lidia Marino, provided by their family for this story:

For couple slain in cemetery, visiting son’s grave was a daily ritual 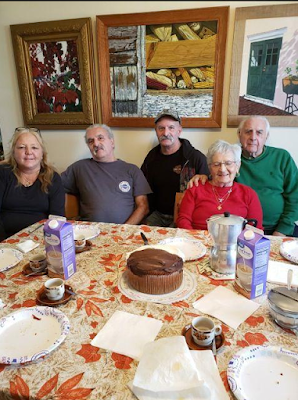 The Marino's were born in 1934 (Paul) and 1935 (Lidia). Lidia was born the same year as my father. Paul worked as a lithograph printer and Lidia was a mom who cared for her home and her children. She loved to sew and do needlepoint and cook. Paul was a busy guy when not at work: "He was an accomplished photographer, whose other hobbies included painting, woodburning, playing guitar...".

They were basically a lot like my parents. My mom, who is now deceased, did needlepoint and made quilts when she was younger, did the laundry and kept the house. My father, who is a retired physician, was a skilled woodworker when he was younger, played the piano and guitar, hunted and shot recreationally. I assume that the Marino's were like my parents: they never bothered anyone and just wanted to be left alone in return.

In the case of the Marino's, Paul and Lidia also had a son with cerebral palsy they cared for his entire life until he died in 2017. They visited his grave every day, driving the five miles just across the state line.

For whatever reason, and many of us suspect exactly what the motivation was, a 29 year old black man, Sheldon Francis, who by all accounts had no connection to the Marino's, chose to walk up behind an elderly white couple while they walked to their son's grave and about halfway there he shot them in cold blood. The Marino's son Ray Marino is quoted in the story:

If push came to shove, to protect myself or my family I could shoot someone. But to walk up behind an elderly couple and shoot them in the back of the head, unprovoked?

That is something only a sociopath and an animal would do.

Oh, and kudos to Fox News for finally, more than a week after their murder, naming Paul and Lidia Marino.
Posted by Arthur Sido at 8:00 AM