What Do You Do When Everyone Else Is Panicking?

For all of our pretensions to being independent actors, most people are basically sheep. Where the herd goes, they go. It is most common when it comes to things like consumerism. Everyone else has Item X so therefore I need Item X. People buy $50 jeans when $10 jeans are basically the same thing. In more extreme examples, rioters exhibit this same behavior although it is mostly contained in certain segments of the population. One person throws a brick through a store window and starts grabbing stuff and the next thing you know hundreds of people are looting stores. They were probably not out that day intending to cause mayhem but once the crowd started to move, they just got carried away.

We are obviously seeing this playing out right now in America. It spawned a bunch of memes and funny hashtags. Then people realized that it was actually happening. So they went out to stock up as well. People started posting on social media that stuff was out of stock, so it just accelerated. People buying toilet paper started to also grab up bottled water, even though almost every American has ready access to water from the tap, and disinfectants and hand sanitizer. From there it expanded to include shelf stable foods as well as fresh meat. Now diapers and baby wipes are unavailable which is an obvious problem for parents. I was just monkeying around on the Sam's Club website and it was incredible how much stuff was out of stock. Peanut butter. Powdered milk. Sam's Club normally has a surprisingly comprehensive emergency food section. It is gone, all they show are two items and they are both out of stock. This page normally has dozens of items. Even their $1000 one year supply kit is out of stock. I ordered something from this category a week ago and it still hasn't shipped and likely won't. 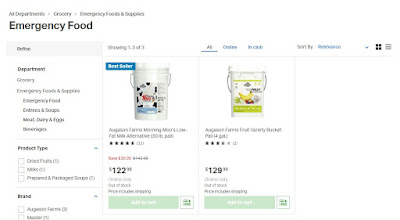 When things get unstable, people start to think about protecting what they do have. A normally gun-unfriendly family member of ours was openly pondering that he and his wife only have a .22 and that made him pretty nervous. Lots of people are doing what comes naturally and stocking up on firearms and ammo.

Pictures were circulating on social media of people lined up out the door and down the sidewalk at a California gun store, as I believe Californians have to submit to a background check to buy ammo. Word is that a lot of people are getting denied, probably because the system is overloaded. Look at this video of what is normally a pretty comprehensively stocked gun store stripped down to what appears to be only the high end, expensive stuff (Daniel Defense is available! 😂) and the ammo wall is wiped out.

Particularly ominous is that it sounds like the major distributors are also out of on a lot of stuff so when this inventory is gone, it is probably going to be gone for a while, especially at smaller local stores as distributors will replenish the big retailers and places like Bud's first.

It is not just in meatspace. The Palmetto State Armory site keeps crashing from sheer volume. I was playing around late last night online looking at ammo and put some ammo in my cart at PSA just to check shipping. I went back this afternoon and the ammo I had in my cart was out of stock.

Good thing I bought something similar elsewhere. At this rate I would expect a) widespread shortages and soon, b) serious price increases on all ammo and firearms and c) significant delays in shipping times. Places I have purchased from before, like SGAmmo.com, have warnings to that effect:

Due to extremely high order volume orders placed at this time are expected to ship out in the next 5 to 10 days. Expect the potential for a 5 to 10 day delay from the time the order is placed to the time it is shipped from our warehouse.

That is pretty unheard of from dedicated online ammo shops. The most popular calibers like 9mm and 5.56/.223 are going to sell out first, followed by .45 ACP and 7.62x39 and then I expect it will spiral from there into hunting rounds, .22 LR and even more exotic stuff like 10mm. While not many people have the calibers like 10mm, when that sells out you have to keep in mind that manufacturers are going to concentrate on making more 9mm and 5.56/.223 because that is what sells. Accessories will be the next thing to go, I would imagine that 30 round magazines for AR/AK platforms are going to disappear in a hurry.

Anyway, by next weekend things are going to be really sketchy unless some medical miracle happens. But what I really was thinking about is what do you do, if you are a reasonably even-keeled person, when everyone else is going nuts? There are two factors you have to keep in mind:

One, I don't know how long this will last and neither do you (or anyone else)

Two, I have plenty of stuff but I also don't want to run out of anything we need.

So, with that in mind do I take the high road and not buy extra stuff? Or do I try to get ahead of it and make sure that my family is cared for?

Most of us are opting for the latter. I don't really want to spend extra on ammo or food when I have plenty already and both the means and the willingness to defend what I have...vociferously and with extreme prejudice. However, my fellow Americans have proven over and over in my lifetime that I can only depend on them to be stupid and selfish. That seems harsh but look at your local warehouse store or grocery if you doubt me. Look at social media and see people who are so consumed by their hatred of the President of the United States that they wait, panting eagerly, for someone to post something, anything, so they can comment about how whatever Trump did was the wrong thing, is making it worse and is a tool of the Russians. These people are nuts but on the bright side many of them live in confined urban quarters so maybe the virus and/or the social instability will help thin them out.

It is hard to not panic right now, even though as of today I have nothing to panic about. Social media doesn't help. The memes are funny and fortunately I have minimized the number of stupid and uninformed people I interact with on social media and I am staying away from the comment sections on news stories. I just don't need that crap right now.

Keep calm. Be strategic. Worry about what you can control and not so much about things you can't. As the Zman said today: The first duty of the prepared is to keep their wits about them.

Take care of you and yours, and then your neighbors. Expect the worst from everyone else. You won't go wrong with that strategy.
Posted by Arthur Sido at 5:10 PM