The (Not So) Curious Case of Bubba Smollett

It is starting to feel like Groundhog Day in America.

- A black person claims to have been the victim of a "hate crime".

- The media, celebrities and politicians trip over themselves to condemn this atrocity. This Is Not Who We Are!

- A few days later some actual investigation is done and it turns out to be a hoax of some sort.

- The media barely mentions or retracts their original message.

The latest example is the case of Bubba Wallace, a black NASCAR driver (I guess the only one). Since he is apparently a pretty mediocre driver, he has latched onto the black Lives Matter movement in spite of being only half black and he looks mostly like a Greek guy. At a quick glance I wouldn't have thought he was black at all. Anyway.

Over the weekend it was claimed that a "noose" had been found in a garage at  Talladega Superspeedway assigned to Wallace. The whole thing screamed hoax from the very beginning. Who the hell hangs a noose anywhere these days? If you want to express "racism", you can start a blog! Not to mention that since these cars and the equipment going along with them are incredibly valuable, I am sure the whole area is blanketed with cameras. In general, there is about a 0.000% chance that this happened in 2020. But that didn't stop NASCAR from freaking out about it, and of course celebrities condemning evil White NASCAR fans because everyone knows NASCAR fans are all racist hicks. Even the FBI was called in to investigate it.

Read that again. The F freaking B freaking I sent actual agents to investigate an obviously ridiculous report of a noose in a garage. THE FBI!

The timing is pretty obvious and clumsy, coming right on the heels of NASCAR banning the Confederate flag from events. The message is obvious. NASCAR considers their fan base to be horrible, racist people The President of NASCAR, Steve Phelps, swore swift and merciless justice on the perpetrator:

“This is a difficult time for our sport but we are going to react swiftly and again we’re going to use all the means, resources at our disposal and of those of the FBI to make sure this person or persons are caught and dealt with swiftly and severely,” Phelps said in a teleconference with reporters.

“There’s no room for this at all and we won’t tolerate it.”

Phelps said those caught would be banned from the sport for life.

Phelps later got super righteously indignant at the idea that this might be staged, given that most of the "hate crimes" in the last decade were staged.

As Phelps talked to reporters Monday afternoon, he turned angry at the notion that the noose was staged.

“I would say that is something that personally offends me,” Phelps said. “This is a terrible, terrible act that has happened. For those who would think that this is staged, I wouldn’t know where to go with that.”

Phelps said that NASCAR has provided Wallace’s extra security. Wallace was at the forefront of NASCAR banning the Confederate flag, calling for it two days before NASCAR did so.

Phelps had to be giddy at the idea of a noose being left in Bubba Wallace's garage, confirming that his fan base are a bunch of evil rednecks. It was a dream come true, a kick in the groin to those stupid hillbilly fans who spend all of that money on the races and merchandise that pay his salary. Before the race all of the other racers pushed Bubba Wallace and his car to the front of the line, an ironic and unintentionally hilarious echo of affirmative action where yet another black man was given an achievement he did nothing to earn thanks to the hard work of White men.

The FBI investigation was completed and of course they pinpointed the dastardly racist that perpetrated this awful deed! 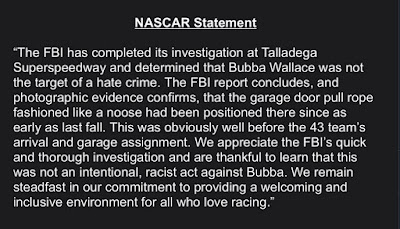 The old standby hate symbol, having a handle on the pull rope used to close a garage door. Those have been around since....since there have been garage doors. What kind of an idiot sees this and assumes it is a noose, other than someone who has a vested interest in being portrayed as a victim? It is attached to the damn door and is pretty obviously present on every garage door at Talladega. 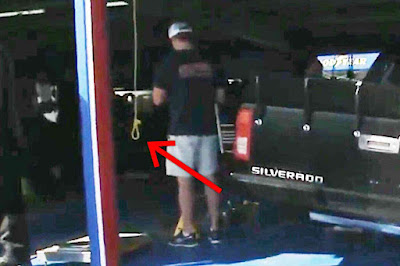 Oh, and Bubba Wallace finished Talladega is 14th place, clearly held back by the forces of systemic racism. Now he has entered the lexicon of American hoax hate crimes right next to Jussie Smollett.... 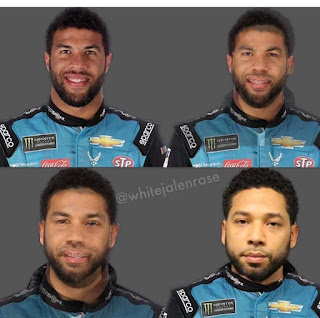 What every thinking person was assuming turned out to be the case. There was no "noose", there was no "hate crime". It was a damn pull rope with a handle. We have been so inured to the repeated instances of hysteria over "hate crimes" turning out to be hoaxes that thinking people automatically assume a "hate crime" is a hoax until proven otherwise.

I am sure that Bubba Wallace will face no repercussions for going on a tirade about the "racist" attack he suffered. Hell, he probably scored a handful of new endorsements from companies eager virtue signal and as a bonus to shit all over NASCAR fans.

The new, woke NASCAR has done a lot to alienate their fan base in just a few weeks. Hopefully people will stop subsidizing the motorsport that seems determined to dump all over their fan base, in order to signal how woke they are to people who won't become race fans no matter what they do.

It is all so wearying and predictable.

The actual hoax itself isn't that interesting in and of itself but some of immediate kneejerk reactions from "conservatives" was quite interesting. 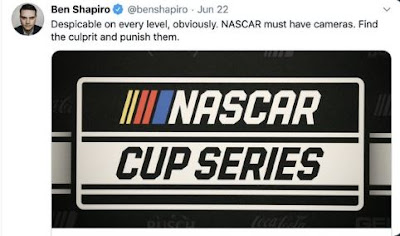 I am sure Li'l Ben is a big NASCAR fan. As soon as the news that it was bogus hit, here came Ben to shift positions and paint himself as always being suspicious. 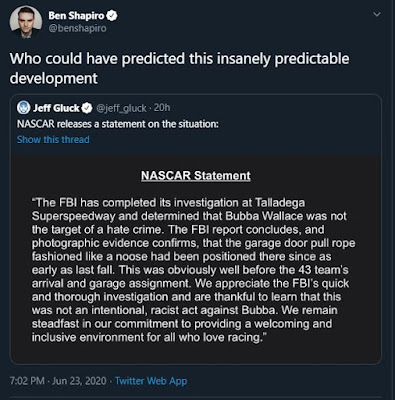 Yeah, we aren't buying that Ben. Shapiro lies like fish swim, it just comes naturally to him. Because he is the miniature king of Conservative Inc., he has learned to shift positions almost effortlessly.

Next up is Nimrata Randhawa, who goes by the name "Nikki" Haley, and is a darling of thirsty Boomercon divorced dudes who think she is hot. Spoiler, she is not. Also spoiler, she is not all that smart.

Bubba's army is mostly a bunch of idiot politicians. Regular Americans knew this was a hoax. At least she had the decency to not pretend she knew it was a hoax like the loathsome Shapiro. She just moved on and pretended like it never happened.

Then soft as cotton balls Scott Walker, who looks like he would cry at a sudden loud noise, threw in his two cents. 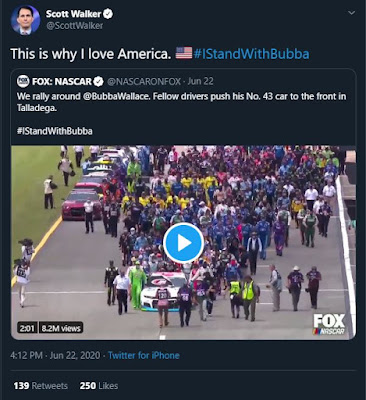 You love America because a black guy lied about a noose and was fawned over by the media and NASCAR for a couple of days? Do you still stand with Bubba? No retraction from Walker or apology, just some pictures of pages from his Bible and tweets about rioting in Madison.

These are just a few examples. An awful lot of "conservatives" are quick to condemn Americans as racist, and slow to apologize when they slander us yet again.

These cucks must be purged from the GOP or the GOP itself must be burned to the ground. The American people need a political party that actually represents them. Cowards like Walker and grifters like Shapiro are a greater threat to the American people than antifa and BLM. At least antifa and BLM are honest about hating us.
Posted by Arthur Sido at 2:26 PM