Iowa representative Steve King has been on the hit list for the Left for a long time. He has made some statements about race and Western civilization that are considered not sufficiently self-loathing, although they wouldn't have elicited so much as a yawn in years not so long past. After one such utterance, the cowardly cucks in the Republican party stripped him of all of his committee assignments, basically disenfranchising the people of his district. Establishment Republicans have been backing primary challengers for several elections and last night they finally got rid of King as he lost his primary to an Iowa state senator, Randy Feenstra, described as "well funded" which is code for "received a ton of out of state money". GOP Chairwoman Ronna McDaniel cheered King's loss...

.....and she sounds an awful lot like far left bimbo bartender Alexandria Ocasio-Cortez..... 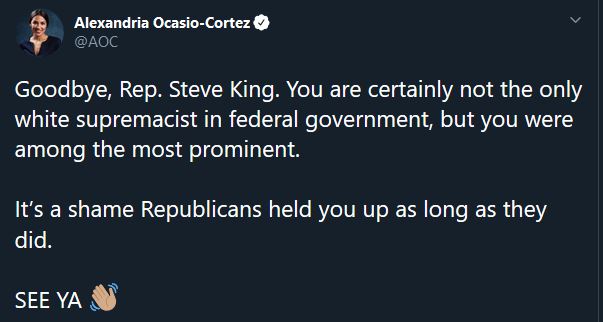 Even an imbecile like AOC understands that the GOP just gave the Left a win and did so using "conservative" funds that could have gone to help re-elect Trump. Instead they wasted money trying desperately to placate the Left, an effort that will be in vain.

AOC says something important, probably by accident. To the Left and the media, Steve King isn't an anomaly. His "white supremacy" is mainstream, and literally every Republican political figure is a "white supremacist" even non-white Republicans. The Left will take the win here and move on to their next target and you can be sure they have a list.

Partly this is a symptom of the general cowardice of the Republican Party leadership. While the Democrats turn a blind eye to the more rabid leftists in their own party, including people who are actual racists and anti-Semites like Ilhan Omar and Rashida Tlaib, the Republican party will turn on their own members with hardly any encouragement. Republicans are more terrified of being called racist than they are of losing the country. The word "racist" or the accusation of "white supremacy" has an almost magical effect on Republican leaders and will disarm them and cause them to surrender automatically.

The other factor is that the leadership of the GOP pretty openly despises white people. Sure they rely entirely on getting elected via the votes of middle and working class whites but that doesn't lessen their disdain for us. Just like Democrat leadership takes black voters for granted and avoids living near blacks, Republican leaders find white conservatives in fly-over country simply revolting, seeing us as backwoods hicks always going on about abortion and guns when the GOP leadership wants to know how they can lower taxes for corporations a little more so they have more money to spend pandering to sodomites. They are completely dependent on us but they despise us, and in spite of decades of evidence that the national GOP has priorities that have nothing to do with what our priorities are, we keep getting suckered into showing up every November and dutifully voting for Republicans, thinking that this time maybe they will keep their promises.

Ultimately the powers that be in the Republican party have seen the handwriting on the wall, and well they should as they have been complicit in writing it. The nation is going to turn into a majority third-world population in just a few years and the Conservative Inc. grifters are desperately looking for a way to stay politically relevant for a little longer. People like Marco Rubio see a potential future as a progressively (pun intended) more liberal Republican, always shifting just enough to be seen as the opposition while taking on whatever positions he needs to in order to stay electable.

Steve King should run as a third party candidate. Sure it would mean losing a seat to the Democrats but really that has already happened. Randy Feenstra sounds like a Never-Trump cuck who deserves to lose. Better a liberal who admits it occupying that House seat than some mercenary cuck who pretends to be a Republican.

The GOP and Conservative Inc are your enemies, just the same as antifa. Don't forget it.
Posted by Arthur Sido at 8:10 AM