Corporate Virtue Signaling: It Is OK To Buy Our Shoes Made In Sweatshops Because We Care

For reasons I won't go into here, I had occasion to visit the website of Reebok yesterday (I have never owned a pair of their shoes). Upon loading their home page, I was greeted with this bit of nonsense: 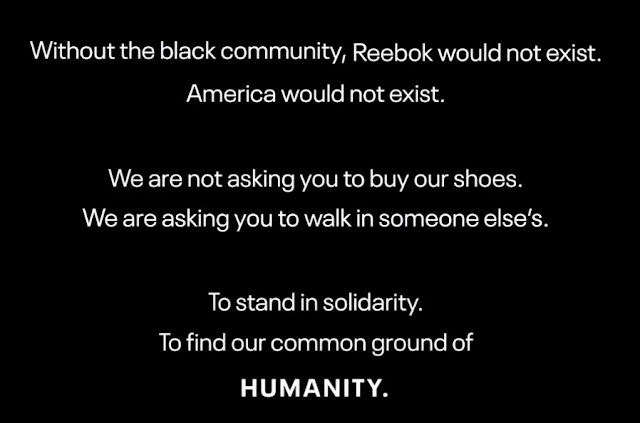 Well that is subtle. But is it true?

Let's take the first claim. Would Reebok not exist without the black community?

Reebok was founded some 125 years ago in Bolton, England, originally known as J.W. Foster and Sons. In 1958, the grandsons of the founder Joseph William Foster formed a company called Reebok. 20 years later Paul Fireman introduced Reebok to the U.S. marketplace in 1979. In 2005 the German company Adidas acquired Reebok. From what I can tell, no one black was involved in the creation of Reebok or in a significant way in the growth of Reebok into a global brand. The same is true with current parent company Adidas which doesn't have anyone non-white on either board, other than an Asian lady named Jing Ulrich. While many black athletes have been paid to wear Reebok shoes for marketing purposes, Reebok absolutely would have existed without "the black community".

The second claim is more serious and significant. Would America exist without the black community?

The people who discovered the American continent and eventually settled North America, conquering the wilderness and creating the nation known as America were pretty much without exception white. Every President of the United States from April of 1789 to January of 2009, a period of 220 years, was a white man. There wasn't a black person in Congress until after the Civil War and to this day while over 12,000 people have been elected to Congress while only 153 of them were black, just over 1% of people elected to either the House or Senate. No black people were involved in writing the Constitution. The state Constitutions were written by white people. Our state boundaries were determined by white people. Our cities were designed by white people and the buildings were designed by white people. Our schools, our universities, our libraries, our museums, our zoos, were almost entirely the creation of white people. Every significant technological achievement of America was made by white people, or occasionally Asians or Jews.

Well what about the economic contributions of black slaves? While it is true that slave labor was supposed to be a significant cost savings for Southern cotton growers, we have to examine the long term costs. The Zman discussed this at some length in a recent post, The Price of Cotton, where he writes:

All of it, even the sense of exasperation by normal white people, is just a way to avoid the painful truth about America. If the plantation owners had simply paid European workers, even Chinese workers, to pick the damned cotton, none of this ridiculous drama would keep happening. These riots, like all previous riots and pretty much the last seventy years of American history, is just the price of cotton. The tax paid by white people that never goes away and goes up every year.

Without the black community, America would probably not have fought the Civil War where over half a million white Americans died in a struggle to hold the union together precipitated by the issue of slavery. Without the black community we wouldn't have had the race riots in the 1960s and we wouldn't have the race riots and looting happening today.

The black community, far from being essential to the existence of America, has been an anchor holding America back for the last 150 years. As the Zman wrote, having freed the slaves we never really dealt with what to do with them afterward and they and generation after generation of their descendants have never fit in. They say they hate living here and they clearly hate us but they also don't want to go back to Africa. They are in a perpetual state of limbo, neither American or African. They clamor about getting "their fair share" and "reparations" but they already have received untold billions transferred to them from white people since the "War On Poverty" started and this ended up driving most of them into permanent poverty. More on this topic in an upcoming post.

In short, had blacks never been brought to America, our nation would be better off in virtually every conceivable way.

I don't completely blame blacks for never fitting into America. Culture is downstream from race. America was founded and designed as a new home for people of European descent. The Founders never anticipated a nation that was multicultural with a majority of people who do not share the ethnic and cultural background of heritage Americans. Individually blacks can fit into America but as a group? 150 years have shown that the dream of a multi-racial utopia will never come true.

No one believes the nonsense Reebok has on their homepage, least of all the people at Reebok and Adidas. So why do they have it plastered on the web? It isn't to placate blacks, who are a small percentage of the population in terms of numbers and even smaller as a buying block. It isn't even to try to head off looters. No, it is simply to signal to their white customer base that Reebok is a Good Brand™ and that white people can buy their products without guilt. Despite what they say, it is all about selling shoes.

In corporate virtue signaling, blacks are infantilized just as they are by Democrat politicians. A pat on the head, an empty gesture or slogan and they go right on with business as usual.
Posted by Arthur Sido at 12:53 PM