Texas is considered by many to be the ultimate "red state", the conservative bastion that will never go blue because Texans are rugged, independent cowboy types. Like most conventional wisdom, it is mostly bullshit. A new report came out about the population of Texas and was reported in the Texas Tribune, painting a bleak picture: 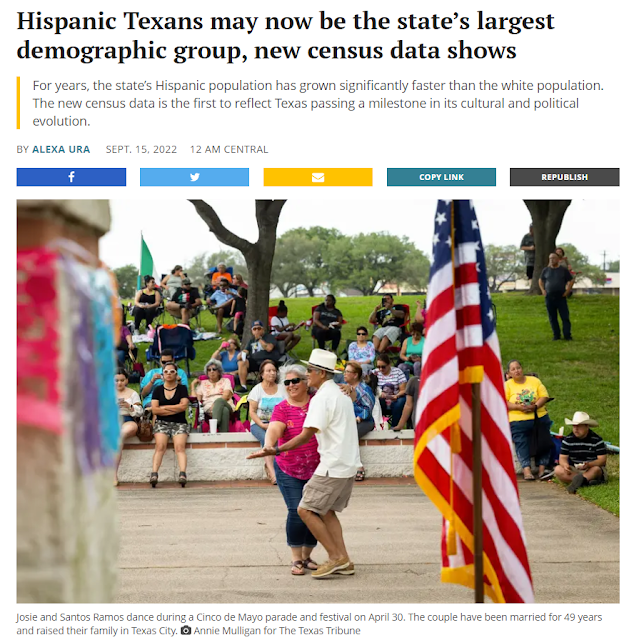 This shift has been coming for a long time..... 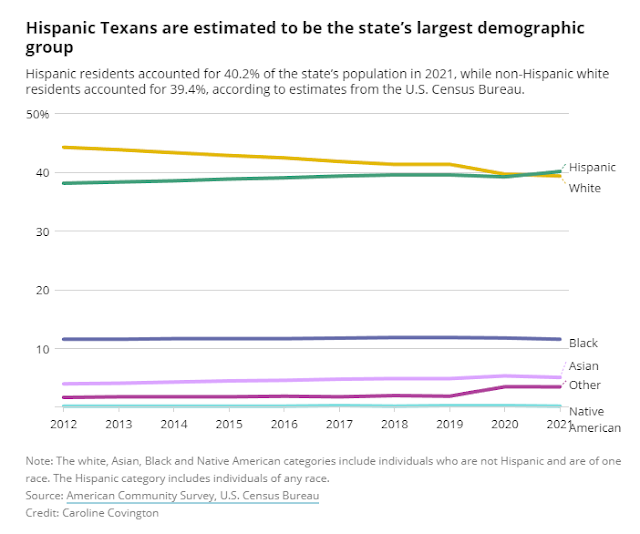 Texas joins California and New Mexico as states where mestizos are the racial group with the highest percentage of the population. In both states mestizos are approaching an absolute majority, in New Mexico especially where the mestizo population is at 47.7% and climbing. In other states like Nevada, Hawaii and Maryland the White population has dropped below the 50% mark. That means that in 6 of the 50 states making up the Union, heritage Americans are no longer a majority. The article continues: 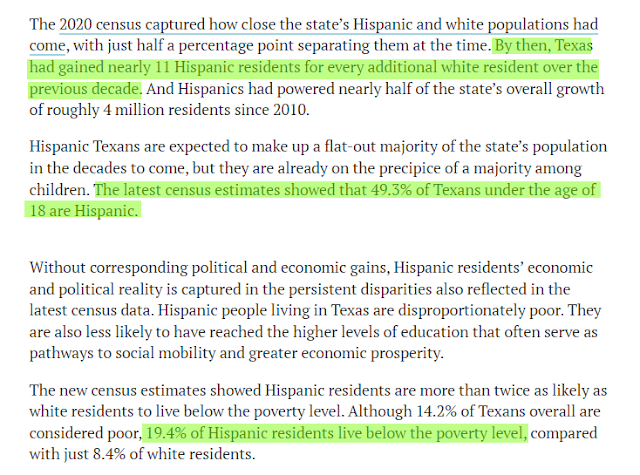 There are a couple of critical data points in those paragraphs:
- "...Texas had gained nearly 11 Hispanic residents for every additional white resident over the previous decade"
- "The latest census estimates showed that 49.3% of Texans under the age of 18 are Hispanic."
- "The new census estimates showed Hispanic residents are more than twice as likely as white residents to live below the poverty level."
We know a few things about mestizo voters, especially outside of Florida's relatively conservative Cuban diaspora. They tend to vote Democrat by a 2-1 margin and they also tend to be far more radically leftist than other Democrat voters. I wrote about this in 2020, The Single Issue Focus Of The Gun Rights Lobby: Both Their Greatest Strength And A Fatal Flaw, when I pointed out that mestizo voters were significantly more supportive of Bernie Sanders in the Democrat primaries than other groups. Biden won the nomination largely on his massive support from black voters while Bernie Sanders received over 50% of the mestizo vote, almost 20% more than he received from any other racial demographic.
Again what this tells me is that the future of Democrat party politics is going to be far more radical than the past. While black voters have mostly lived in America for many generations, most mestizos came here after 1965. In 1970 there were only an estimated 8.9 million mestizos in America but in the latest census that number had exploded to over 62 million, an almost seven-fold increase. Those voters are going to favor much larger government, especially given that they tend to be a lot poorer than Whites. As they gain electoral clout they are going to figure out pretty quickly that they can vote to rob heritage Americans of their wealth. Mestizos are generally a lot smarter than blacks who have been easy for Democrats to manipulate but mestizos are cagier. They will want something in return for their votes.
Of course these are "official" numbers, the real number of mestizos is much higher. A news story yesterday shows just how much higher it might be:
Highest Number in US History: Border Patrol Logs 8,000 Migrants Entering US Each Day
Those are just "migrant encounters" so that doesn't capture the illegal aliens that slipped in without being noticed.
Immigration authorities have already logged two million border encounters this fiscal year, a record high. The previous record holder was the 2021 fiscal year, which saw just under two million migrant encounters.
That is over 4 million "migrant encounters" in just the last two years. At 8,000 "migrant encounters" per day over the course of a year it works out to nearly 3 million and it is safe to assume that there are at least double that number when you add in illegals who slipped past the swamped Border Patrol. Six million illegals per year and that number is growing.
The southern border is essentially as wide open as Kamala's mouth when she was fellating her way up the political ladder. The little stunts of sending illegals to the Vice Presidential residence and to Martha's Vineyard are cute but not really meaningful, not when compared to the millions of illegals that enter each year and starting squirting out anchor babies. In Texas as noted above, essentially half of all residents under 18 are mestizo and that isn't going to change for the better.

Less than one third of births in 2020 were to Whites. Think about that for a second. Texas has the second largest population in the country and more than 2 out of 3 births in 2020 were to non-Whites. Going back to 2013 White babies were only 35% of births. What percent of the under-18 population in Texas is White? Certainly less than 40% and that means that each year as new voters in Texas turn 18 and older White voters die, the electorate is growing browner by leaps and bounds. In 2018 Ted Cruz barely beat Beto O'Rourke, a spastic dimwit, only receiving the slightest majority of votes (50.9% to 48.3%). 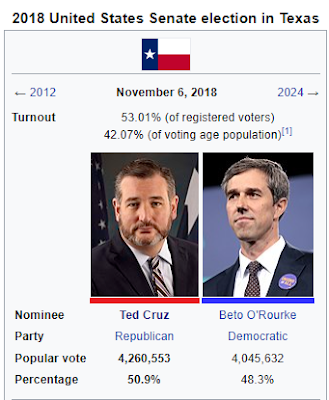 If Democrats had run a semi-serious challenger, Cruz might well have lost that race. Then look at the largest cities in "red state" Texas. Houston, the largest city in the state and the 4th most populous city in America, has a black Democrat mayor. The next largest is San Antonio with a leftist "independent" Jew/mystery meat mayor. Then Dallas, black Democrat. Austin has a Jewish mayor. Finally at number 5, Fort Worth, there is a Republican White chick mayor but then we go right back to non-White in El Paso, a mestizo guy. You get the picture.
Far from a rock solid "red state", Texas is on the verge of flipping to the Democrats maybe as soon as 2024 depending on who is running. Trump won Texas in 2020 with only 52% of the vote, down slightly from his 2016 win. In 2012 loathsome Mitt Romney managed 57% and in 2008 McCain won 55%. "Texan" George W. Bush won the state in 2004 with 61% and 59% in 2000. The trend line is not favorable.
With Whites not having enough children, liberal Whites fleeing to Texas from California and mestizos cramming into every nook and cranny, it is just a matter of time before Texas becomes as reliably blue as California and Massachusetts. Other states will follow in short order. While my state is still 75% White, others are charging to the 50% mark. Florida is only 51.5% "White alone, not Hispanic or Latino" according to Wikipedia and it is the 3rd most populous state. Georgia is down to 50.1% "White (non-Hispanic)" as of the 2020 census. Arizona? 53.4% White (non-Hispanic). While blacks have remained about the same percentage of the population for decades, hovering in the 12% range since 1990, the mestizo population has been exploding.
The black population is far louder, more annoying and violent (so far) but the mestizo population is what will cause America to tip into third world status as they continue to gain political power. Despite fleeing the disaster of Central and South American politics, most mestizos seem content to replicate those terrible political systems they fled from in America. The future of North America looks a lot like El Salvador.
Posted by Arthur Sido at 10:55 AM