Rhodesia 2.0: Now With Even More Murder, Mayhem And Starvation!

Nothing new here but on the other hand it makes me think I am not completely numb to it all when this stuff still gets a rise out of me.
For research reasons I brought up the webpage of the United States Department of Agriculture, the USDA for short.
To repeat, it is the Department of Agriculture but these are their "priorities" on the landing page.

Racial "justice". "Climate change". Food and nutrition "insecurity" which means making sure people have plenty of food stamp money to buy Doritos and Mountain Dew. The last one didn't seem to make much sense, I clicked the link and it talks about improving the food supply chain to be more resilient. That one sort of makes sense. What is largely missing from the USDA list of priorities is much to do with the actual business of....agriculture. The USDA isn't all that interested in the work of producing food, it is primarily involved in wealth transfer from the shrinking productive class to the parasite class. In that respect it is like every other Federal agency. What this also means is that even as the world's population balloons, especially in regions that cannot feed themselves, one of the leading food producing nations in the world is focusing "agricultural" resources toward wealth redistribution rather than improving agricultural efficiency.
This is happening at the same time we see headlines all over warning of looming problems in the food supply chain:
The summer drought’s hefty toll on American crops
Graphic from American Partisan.... 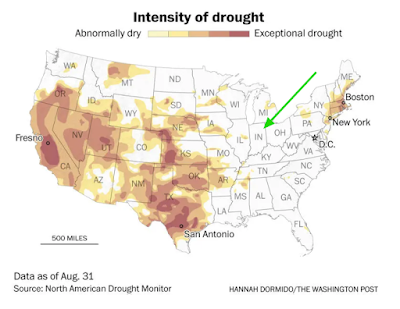 The green arrow points to where I live and as you can see, no drought here. It gives a false sense of things being OK, our crops look great, grass has been growing like crazy all summer, we all have lots of hay in the barn. In other places it is a different story. From the linked article:
American corn is on track to produce its lowest yield since the drought of 2012, according to analysts at Rabobank, which collects data about commodity markets. This year’s hard red winter wheat crop was the smallest since 1963, the bank’s analysts said. In Texas, cotton farmers have walked away from nearly 70 percent of their crop because the harvest is so paltry, according to the U.S. Department of Agriculture. The California rice harvest is half what it would be in a normal year, an industry group said.
As goes our food supply, so goes the world. For example:
Sugar and Salt Shortage Worsens Philippines Food Supply Woes
The global food system works great when it is working but when it doesn't? We have already seen that the entire critical infrastructure in America is fragile and just waiting for a nudge to topple it over.
Europe might be facing both a food and energy crisis and with Giant Ears taking the crown in England, I expect more economic suicide to follow leading to stories like this:

Many pubs are on the verge of closing as their utility bills have increased ten fold in the last year. Businesses that close in this current environment are unlikely to reopen. Meanwhile manufacturers in places like China and India can pollute as much as they like and pay substandard wages in awful working conditions. That is OK, libertarians tell me, because muh free market always is the best!
My sneaking suspicion is that something else we will soon find out is that the actual deaths from Covid, already wildly exaggerated, will pale in comparison to the carnage of the "vaccine" side-effects. From Alex Berenson:
URGENT: Deaths are soaring in one of the world's most highly mRNA vaccinated areas
Deaths in the Australian state of Victoria, where 95 percent of adults have received Covid vaccines and most are boosted with mRNA shots, soared to their highest level in at least 13 years in August - far above the five-year average.
Victoria offers almost unique data: near-real-time reporting on death trends in millions of people who are heavily vaccinated but had little exposure to Covid before being jabbed.
The picture is increasingly grim.
He posts stuff like this all the time and it is clear that They are trying to make it as hard as possible to find this data but he keeps coming up with it. I keep being reminded of an old post, Are We Living In Rainbow Six?. What if, just if, the whole point of Covid which was not that dangerous to most people was to get everyone to take a "vaccine" that would eliminate so many of those useless people who have no place in the new order?
Meanwhile neighboring Illinois is about to become (even more of) a paradise for violent criminals.
On January 1st, 2023, Illinois jails will turn many prisoners loose
One part of the 611-page amendment to House Bill 163, a massive police reform initiative introduced by the Illinois Legislative Black Caucus, is the Pretrial Fairness Act, which would abolish cash bail.
The aim of the legislation would set free certain criminal offenders without having to wait in jail for their court date, because they can't afford bond.
Letting violent criminals go because equity! Of course it was introduced by the Illinois Legislative Black Caucus. Of course it was. Here are the minor offense you will walk without bail for committing:
The Safety, Accountability, Fairness and Equity-Today Act (SAFE-T Act) would restrict which crimes a person can be arrested for, and would free those in custody for 12 offenses, including second-degree murder, aggravated battery, and arson without bail, as well as drug-induced homicide, kidnapping, burglary, robbery, intimidation, aggravated DUI, aggravated fleeing and eluding, drug offenses and threatening a public official.
No, that is not a joke. 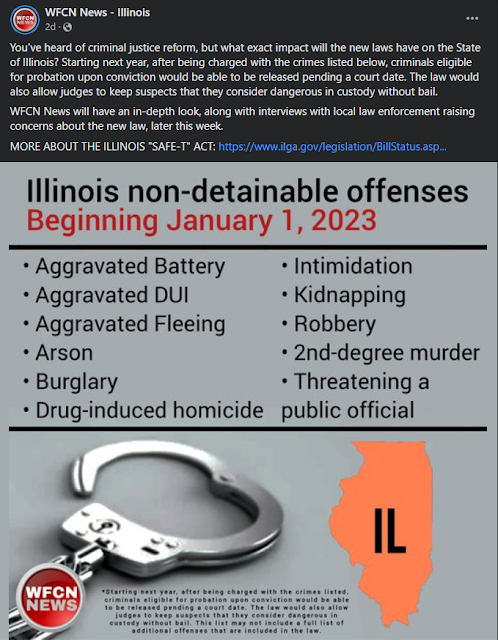 But wait, there is more!
Grundy County Sheriff Ken Briley told WLS that police would not be able to arrest people for certain misdemeanors, such as trespassing.
“Today, I can arrest him if you sign a complaint for trespassing,” Briley said. “January 1st, I’m not going to be able to do that. The law says I have to write him a ticket and leave.”
“Judges may no longer issue a warrant when a defendant fails to come to court,” Hanley added. “Instead, an absent defendant must next be served with a court order asking them to appear and then fail to appear a second time before a warrant may be issued.”
So D'ange'dinoofus decides to wander onto your property. You call the cops because you can't just cap his ass and feed him to your pigs. The cops show up and issue him a ticket, and then they leave. D'ange'dinoofus takes a dump on your lawn and uses the ticket to wipe his backside. You are out of luck unless he actually does something to get arrested for, but there is an obvious problem here in that it means he has already harmed someone. Illinois State Representative Adam Niemerg who represents a district in Southern Illinois doesn't mince words: 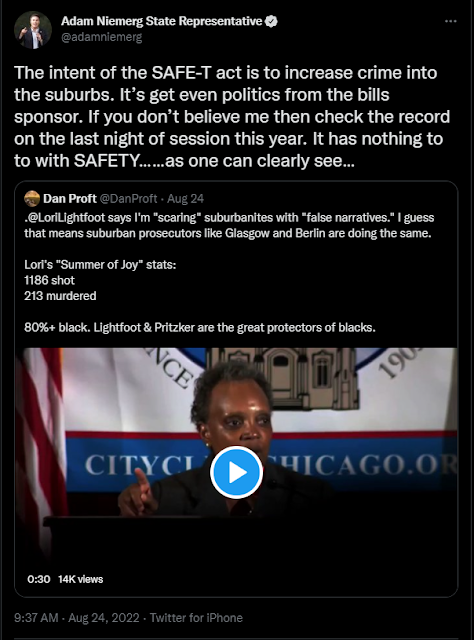 Kidnapping and second-degree murder? You walk no bail. Trespassing? You might get a ticket. The Illinois Legislative Black Caucus thinks it is a great idea to create a nearly literal revolving door for criminals, and not just jaywalking, but all sorts of violent crimes. It isn't like Illinois doesn't have enough violent crime: 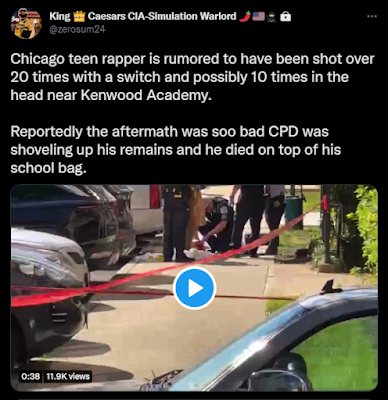 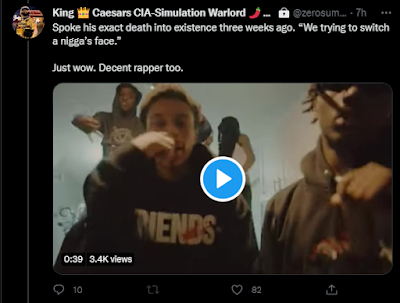 They are picking up dead thugs from the sidewalk with a mop and bucket.
The only possible reason for this is to create mayhem and chaos that provides a pretext for more violations of civil liberties and more gun control. I would bet that the Illinois Legislative Black Caucus had some help writing this bill from someone who isn't black and isn't Irish. Violent crime all across Illinois is going to skyrocket, especially when the homies figure out they can case a joint in the suburbs and not worry about getting arrested for trespassing and engage in robbery and burglary but walk free with no bail even if they get caught. Undoubtedly this is going to lead to emboldened criminals and it is likely to increase the number of incidents where homeowners use lethal force to protect their family. Illinois is a tepid Castle Doctrine state so fed up civilians are going to take the law into their own hands.
You don't get the Wild West by making it easier to legally concealed carry, you get the Wild West by forcing regular people to do the job the cops are no longer allowed to do. 2023 is gonna be lit in Illinois and I expect we will see more residents moving east into Indiana.
The future looks a lot like Rhodesia, only with a lot more people and a whole lot more guns.
Just remember, these laws are being pushed by people and those people.....well they aren't so different from you and me in certain, important ways 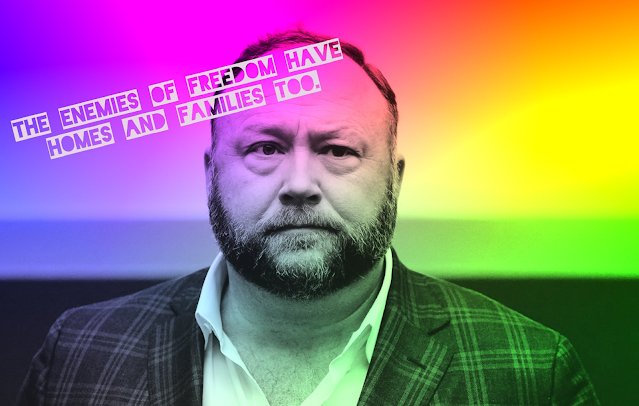