Back in the darkest times of the Soviet Union, or as Bernie calls it "the good old days", about the worst thing they could call you was "counter-revolutionary". It was a term loaded with meaning, primarily the charge of being opposed to the great changes that were in progress. The People want to go this way and you are standing in the way, even though what The People mostly wanted was enough food to eat and to be left alone.
It wasn't just an insult. It had a darker meaning. "The Glorious Bright Future of global Communism was the highest aspiration for mankind, you wouldn't want to stand in the way of that, would you?" quickly morphed into "You are standing in the way of progress for the Workers and must be removed. Permanently." Being a counter-revolutionary meant you were destined for a one way trip to the gulag or a quicker trip to a prison basement that ended with a bullet in the back of your head.
I wonder how long after the Revolution kicked off it took for average Russians to realize they were in deep shit and that they and all of their posterity would have to cower and hope to avoid attracting any attention to themselves. Maybe a year?
This brings me back to Darth Sniff (not my joke) and his rant from last night, complete with ominous red lighting to make you not think this was sketchy or anything. 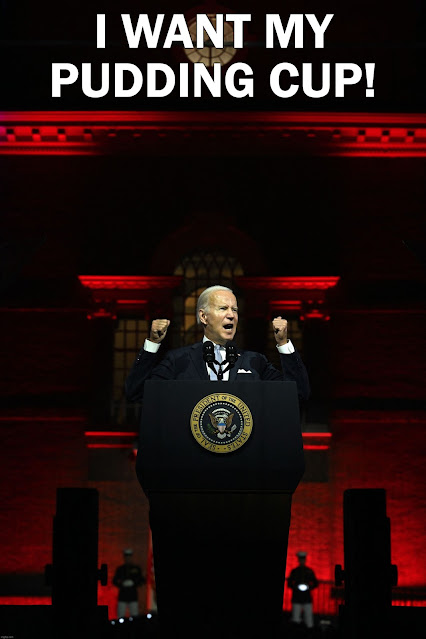 Somebody military confirm this, some people were saying the Marines posed in the background were neither at attention nor standing at rest, something weird in-between. True and what does it mean if so?
If you were doing a drinking game and took a shot every time he said "MAGA", you would have died from alcohol poisoning after the first 5 minutes and after the first 5 minutes, not kidding, my wife and I were looking at each other wondering what he was going to say next and if this was "go-time". Like he was about to start issuing executive orders and talking about mass arrests. He didn't, instead he wandered around rhetorically from Obamacare to patriotism while a guy heckled him with a bullhorn.
Then to cap it off the gaslighting really took off today

After an entire prime time speech (carried by none of the major networks) trashing MAGA Republicans as a threat to our "democracy", trashing tens of millions of people as semi-fascists, Biden dutifully does what he is told and claims he never said such a thing.
What the hell was the point? It doesn't seem to make any sense at all. Unless you move past the theater to the real goal. This was a speech that declared tens of millions of people to be essentially enemy combatants, un-American, a "clear and present danger" to American stability, reactionaries living in the past and trying to return all of us to the "darker times" when America was supposedly awful because you couldn't abort your baby and you could walk around our cities without being a victim of the "knock-out game".
There are acceptable political positions to hold, those dictated by the globalist shills in both parties, and everything outside of those permissible positions is "extremist". I am not being hyperbolic, imbecilic press secretary Karine Jean-Pierre  recently declared:

"When you are not with where a majority of Americans are, then you know, that is extreme. That is an extreme way of thinking."

Think about this. She didn't come up with that on her own, she was fed this concept by her bosses. If you hold an opinion not shared by 50% +1 of Americans, you are an extremist. I understand that I am rightly understood to be a political extremist. That is not something I shy away from (See: So I Guess I Am A "RMVE-WS" Now?) but it is ridiculous in a republic to suggest that unless you agree with  the majority, you are an extremist and a threat to "democracy". How is it a democracy when you declare the people who don't vote with the majority to be enemies of the state? It isn't.
What Biden's speechwriters put forward last night was a declaration of an actual, rather than de facto, one party state. They used to have "elections" in the Soviet Union but only one party was on the ballot. Henry Ford used to say you could have your car in any color you want, as long as it's black. In the America of today you can hold any political opinion you want, as long as it's progressive.
As far as political theater goes, it was vulgar and obvious but that is the age we live in. Blood red and ominous lighting with a black podium. Marines standing in the shadows with the implied threat of violence. The dutifully clapping chimps assembled to provide applause. Subtlety is in short supply these days.
The choice is not the one Biden declared. The real choice is this: submit to what you are told, no matter how ridiculous, or become an unperson in the new "America". It is brings to mind another President making a similar declaration when the buffoonish George W. Bush addressed the Congress and the nation following the September 11th attacks. Bush declared:

And we will pursue nations that provide aid or safe haven to terrorism. Every nation, in every region, now has a decision to make. Either you are with us, or you are with the terrorists. From this day forward, any nation that continues to harbor or support terrorism will be regarded by the United States as a hostile regime.

That was 2001. In 2022 the gauntlet has been thrown in a new "war on terror" but this time the "terrorists" are American citizens with the temerity to hold their own, unapproved opinions. Biden's puppet-masters declared through him that either you are with them or you are against them, and if you are against them you have declared yourself an enemy combatant subject to extermination by the full force of the Federal government. You're going to need more than a gun to take on F-15s wasn't an idle boast.
They aren't kidding around and they mean to seize total control and never relinquish it. That "red wave" we were promised is starting to look like a pipe dream. The stage is set, the pieces are in play, the gulag bound boxcars have the wheels oiled and a fresh coat of paint.
Biden's speech writers were correct about one thing. You do have a choice to make. For most of us it is not too late to walk back our dissent, to recant and repent of our sins. For now at least, but if you don't recant then there will be no mercy, no quarter will be asked and none given. Your fate is that of the kulaks who were likewise "counter-revolutionary" because of their "greed" in wanting to retain for their own benefit the fruit of their own labor. Most of them died without fighting back. Let's not make that same mistake. They might win this greatest of conflicts but if they do make them pay so dearly that they never forget our names.
Posted by Arthur Sido at 8:56 PM