When you are paying attention, you start to see patterns emerging and you also start to see things that on the surface have nothing to do with one another suddenly seem to connect. Once they start to connect? You can't unravel the strings. 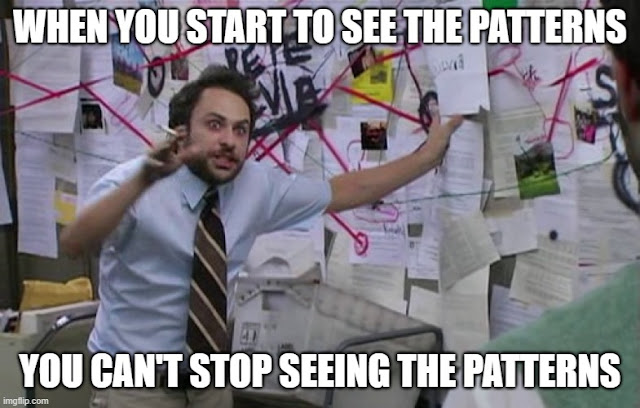 Two big news stories of the week at first glance have little in common.
One, the self-inflicted water crisis in Jackson, Mississippi.
Two, the kidnapping, rape and murder of Eliza Fletcher in Memphis, Tennessee.
What thread connects these two events?
The simplistic, although accurate, answer is: black people
While that is true, I think what connects these two events is a bit more complex.
Both are indicators of the broader decline and nearing tipping point our country is approaching.
Municipal governments have a few basic functions: sanitation, providing police, fire and EMS services, schools, water supply and waste removal. Those are the basics that allow a city to function, to be home to businesses, recreation and housing. When one part stops working properly, the rest typically follow in the dysfunction in short order. The first one to stop working is usually policing and that is the most devastating. If people don't feel safe in a city, they will flee to the suburbs. That has been the story for the last half century as the "civil rights" race riots exposed the looming demographic problem brought about by mass migration of blacks out of the South and into large and medium cities in the north and west.
One by one, cities have reached the teetering point and then tipped over. Some have been that way for decades, most notably Detroit. The Motor City was once a prosperous city and the fourth largest city in America by 1920 but as World War II ended and blacks moved in, the city quickly fell apart. 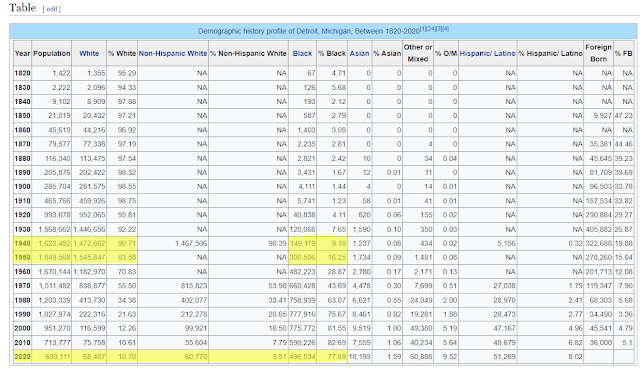 Because I grew up near Detroit and lived in Michigan, including metro Detroit, for many years, these statistics are as familiar to me as the back of my hand. In the 1940 census, the year prior to the U.S. entry into World War II, Detroit was over 90% White with a population of 1.5 million. The black population was under 10%.
By 1950, five years after the end of WW II, the number of blacks had doubled, from 149k to over 300k and as a percentage of the population they went from 9.19% to 16.25%. It would rapidly climb with each census until the most recent as the mestizo and mixed/other category gained significantly.
In 1967, the infamous Detroit race riots occurred. 23 people were killed and Whites fled the city at a more rapid pace. By 1970 the White population was down to 55% and a decade later it was at around 1/3 of the population. As Whites left, several things happened. Crime grew worse as the population of the city became more concentrated with blacks. The tax base collapsed as White residents left. Politically the city was dominated by Democrats with the last Republican mayor being Louis Miriani, who served until 1962 and was replaced by Jerome Cavanagh, a White Democrat who was elected with the overwhelmingly support of black voters. It has been Democrats ever since and the last White mayor was Roman Gibbs who served until 1974, until the recent election of White Democrat Mike Duggan in 2014. That is a 40 year stretch of black mayors and 60 years of Democrats.
Today Detroit's population continues to decline, from a high of 1,849,000 in 1950 to the most recent census of 639,111. That is a decline of nearly 2/3 in 70 years.
Let's go back to Jackson and Memphis. These are both smaller, Southern cities. Both have had, unlike Detroit, a large black population for a long time. As far back as 1950 Memphis was 37% black but like most cities as the decades passed the black population grew more concentrated, now standing at nearly 2/3 of the population.

Jackson, being part of the "Deep South" is even more pronounced.

It is a little hard to see on a smaller screen but Jackson today is over 78% black and only 16.54% White, while in 1970 the city was still 60% White. In both cases the demographic changes led to political changes, with Memphis last having a Republican mayor in 1991 and Jackson has had Democrats since the 1940s and black mayors since 1997. This also means that many of the administrative and bureaucratic positions in these cities are also held by blacks. For example in Jackson.....

The Director/City Engineer is black as is the Deputy Director of Water Operations. Maybe they are the best people for the job, maybe they are politically connected and maybe it is just a coincidence that the Jackson water system is a disaster.
In Jackson the Chief of Police is a black man named James Davis and his entire "executive command staff" are black men. In Memphis the police chief is a black woman named Cerelyn “CJ” Davis. This is a trend throughout the country. Are black top cops less apt to go after black criminals? It certainly seems that a case can be made for that.
Fortunately the good people at Salon, in particular Areeba Shah, have figured out the real problem:
"There are no white people there": Jackson's water crisis, explained
Huh, that sounds like something I might say but then you read the article and you see what they really meant
Little has been done to restore a deteriorating water system in Jackson, which is 82 percent Black [sic]. Extreme weather patterns are now exposing the role racist infrastructure plays in contributing to unequal water systems across the country, in communities that are majority Black [sic].
Ah, the infrastructure is racist. That makes perfect sense to people named Areeba Shah. How is the infrastructure in Jackson "racist"? Does it have nooses hanging around to frighten black people? Is it somehow different from the infrastructure in other, similarly sized cities? Don't know.
It also makes sense to blame White people for the disastrous infrastructure in Jackson even though Jackson has been under single party, monochromatic black rule for the last 25 years. What did the city of Jackson do during that quarter century of control to head off the looming water problem? Apparently nothing. See also: time preference.
Many of our largest cities have significant "no-go" zones and mid sized cities are becoming entire no-go zones. Eliza Fletcher should have been able to jog wherever the hell she wanted, whenever she wanted, wearing whatever she wanted but we don't live in that sort of country anymore so now people point out that a White woman wearing very little clothing out jogging in the dark in Memphis is a supremely dangerous activity. Around here? A woman could jog in her bra and panties at two in the morning and other than giving the Amish boys a thrill nothing would happen but in places like Memphis, Detroit, Jackson, St Louis, Baltimore.....a woman, and especially a White woman, is a juicy target for the violent criminals who tend to be overwhelmingly black.
I shared a small segment of Tucker's monologue about the Fletcher murder last night, here is the full segment.
He gets pretty strident near the end, around the 7 minute mark. Some choice quotes:
Once we accept that as normal we are stuck with it forever....
It will never change except to get worse....
Our entire country will be Memphis (and Jackson and Detroit....) if we don't put a stop to this insanity, right now, with as much force as is required....
Of course you know and I know that there is no political will in America to put a stop to this. We could put a stop to this and in no time at all. We won't. Prisons are overcrowded and do nothing to reform or dissuade criminals. The "justice" system will lock up people for trespassing in a public building without bail or hearings but let rapists and carjacker walk free. The President of the United States declares that 75 million mostly White Americans are a threat to the very fabric of America but can't spare a moment of his time to mention a brutally murdered mother of two in Memphis, or any of the other tens of thousands of victims of violent crime in America.
Someone like Cleotha Abston who has apparently already been imprisoned for 20 years for kidnapping and has a violent juvenile criminal record starting from when he was 13, ending up in juvie court every year from 1995 to 1999 which inclided a rape when he was all of 14 years old, should have been locked away doing the worst sort of hard labor for most of his life and only released when he was no longer a threat to anyone and after submitting to castration. He wasn't and now Eliza Fletcher is dead. It is a story repeated over and over in America on a daily, or even hourly, basis.
What connects Jackson and Memphis is that they are a glimpse into our near-term future as the percentage of the population capable of maintaining and innovating, keeping public order and the basic necessities fulfilled, will diminish to the point that the wheels of civilization come off. Systemic failures will happen more frequently, last longer and be more severe. Adding in new mandates for "green energy" and laws to combat "climate change" will simply make things worse. Soon it won't be smaller cities not having clean water for a week but larger cities without clean water or the power not working in the midst of a heat wave or severe cold spell. People will die.
When the wheels come off the in the city, those who can will flee outward, some looking for safety and some looking for plunder. Sure you might not, and should not, be in one of those cities but you almost certainly live within a short drive of one. That is why we should be watching those urban centers of decay, violence and degeneracy. When they start to fall in earnest, our lives will become far more precarious. Each day the people that built and maintained this country die off and the ranks of the new "Americans" swells exponentially. The tipping point is getting closer and They are smashing the accelerator to the floor in the hope of speeding up the collapse and the creation of a glorious new order, minus most of humanity.
Posted by Arthur Sido at 4:54 PM