We have raised hogs for a number of years since moving to our little farm but most breeds of hog are a lot to handle and butchering weights are more than we are equipped to deal with. We really like Tamworth hogs, they are slower growing than commercial breeds but the bacon is amazing and the ham is a deep red color with a much richer flavor than that pale, watery commercial ham you buy in the store. The problem is that while killing them isn't a problem, handling the carcass certainly is.
So we decided to get some smaller hogs that would do well on forage and poor quality feed. We settled on the somewhat rare American Guinea hog and bought a few gilts (unbred females). They only get around 200-300 lbs when full grown and hanging weight is usually well under 200 lbs, we plan on butchering for meat when the hanging weight will be under 150 lbs. The Guinea Hog females are technically sexually mature very young but it is recommended they not be bred until they are at least a year old. We didn't get a boar so we selected a different breed, a Kunekune, for the male. When the time was right we put on some Barry White, provided some champaign and they commenced to makin' bacon. 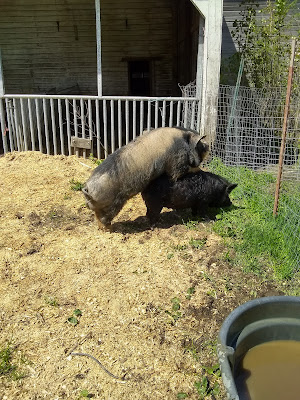 Hogs usually have around a 114 day gestation or about 3 1/2 months. Early summer humping leads to late summer babies, we got 9 piglets out of this sow but lost a couple. Tonight we let the 7 little squealers out of the confined area they had been living in and out onto grass for the first time. 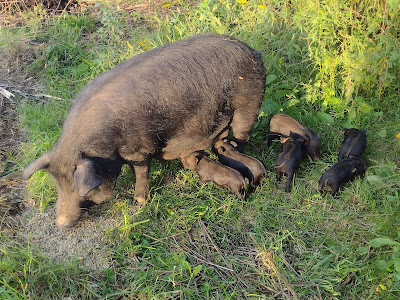 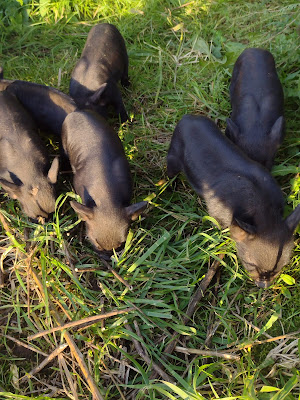 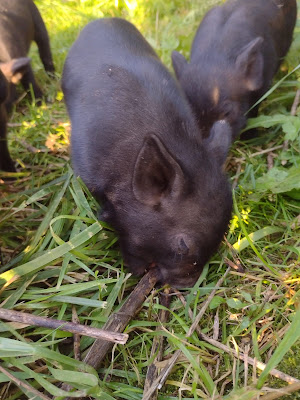 They are super cute right now and are already nibbling at grass as expected from two breeds that are noted for being good at foraging.
We are trying to focus on livestock that doesn't require a commercial feed to thrive, assuming that at some point large scale commercial agriculture will break down and you won't be able to buy pig food at the local feed mill or Tractor Supply.
Cute now but when they are older and it is time to butcher them, the smaller carcass size will be a lot easier for us to handle. They are small and easy to handle, surviving on grass if need be. I'll let you know how they taste when we get around to butchering them and cooking them up.
Posted by Arthur Sido at 7:36 PM