Let's Check In On Krystle Matthews

When last we heard from Krystle Matthews, candidate for the U.S. Senate in South Carolina, she was soliciting a convict for drug money for her campaign:
From "The Universal Franchise Was A Mistake" Files
Since that post in June, she went on to win the Democrat nomination and will face Senator Tim Scott in the general election this November despite, or perhaps because of, Project Veritas busting her engaging in an attempt to get illegal campaign contributions. I guess that played well with her blaque constituency.
Having failed to learn, perhaps because she is not smart enough to learn or is just so brazen that she doesn't care, Krystle was surreptitiously recorded again saying something that should spell the end of her Senate aspirations but probably won't (HT: Doctor Samizdat) 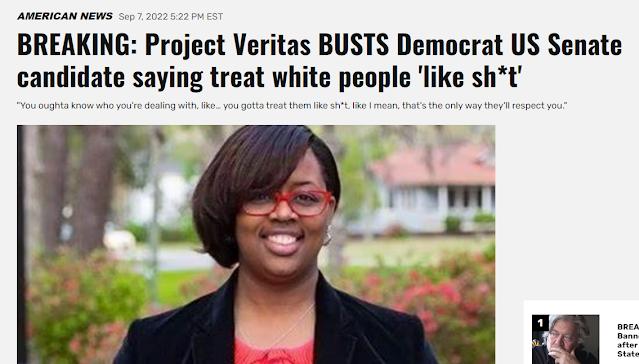 BREAKING: Project Veritas BUSTS Democrat US Senate candidate saying treat white people 'like sh*t'
The lovely single mom of five sez:
"My district is slightly Republican, and it's heavily white," Matthews said to the reporter. "I'm no stranger to white people, I'm from a mostly white town."
"And let me tell you one thing," she continued. "You oughta know who you're dealing with, like… you gotta treat them like sh*t, like I mean, that's the only way they'll respect you."
The progressive, who hopes to unseat Sen. Tim Scott in November, then likened white people to children who need to be controlled.
"I keep them right here, like under my thumbs. That's where I keep it, like… you have to, like, otherwise they get out of control like kids," she said.
"So, for me, I know other people are tip-toeing around them. And I'm like 'yo, that's some white sh*t. I ain't doing that."
Matthews then voiced her distaste for fellow Democrat Bernie Sanders. According to her, the former presidential candidate was too "afraid to say black sh*t" while talking to an all-black crowd.
"If I'm talking to an all-black crowd, I'm saying black sh*t. Now if you don't like it, you can get your ass up and leave," she told the Project Veritas reporter.
What a charmer! And so eloquent with the English language!
The projection here is amazing. black folk need to treat White people "like kids" that need to be controlled. Pretty rich coming from a person of the race that acts like large, violent, out of control children 24-7 in America. If you want to lose a few IQ points you can listen to her on record here:
I wouldn't recommend it though. According to most polls Ms. Matthews trails Senator Scott badly and looks to lose by a 30+% margin. I guess she will need to find a different job to treat White people like shit, perhaps at the DMV?
Posted by Arthur Sido at 1:37 PM