If I was less handsome and masculine. Tucker is out here starting his segment with talk about time preference and a lack of impulse control.
Tucker knows, everyone knows, that when you talk about time preference and lack of impulse control, you are of course talking about blacks. When you combine no impulse control and high time preference with a natural predilection for violence and a lifetime of being told nothing is your fault? You get American blacks.
As Tucker points out, you can't get away from it simply by moving to a smaller city. Crime is exploding  there as well, like Asheville, in Western North Carolina that he singles out. He mentions the new mayor of Asheville, one Esther Manheimer. According to Wikipedia, Ms. Manheimer was born in Denmark and is the former director of the American Movement for Israel. Well of course she was. E.S.T. She is also mostly concerned with "equity" and "climate change" and her Vice Mayor is this rocket scientist.

Yes. Sheneika and a Jewish broad born in Denmark are running Asheville right into the toilet. Who could have seen that coming? In fact the entire city council of Asheville looks like this. 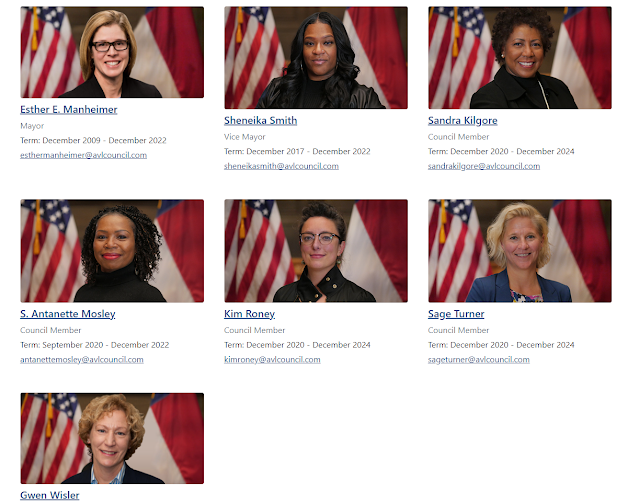 A Jewish chick mayor, a black chick vice Mayor, two more black women, an obvious dyke and two more White women (although the last one looks like a "Fellow White"). What a clown car of woke bullshit and aging estrogen.
Asheville has less than 100,000 people and "only" 10% are black but that still is enough to have crime running out of control.
We have always had lots of blacks but now they are running out of control, acting on their natural impulses like we haven't seen in a long time. Someone is weaponizing them, enabling them to run riot in our cities and when they are (rarely) arrested, they just walk right back out the door and commit a new crime. It is easy to pinpoint the black criminals, we see them everywhere on TV and social media, but the people who are behind letting them slip the leash are harder to see and even harder to name because most normies of both political parties refuse to notice what so many of Them have in common.
When Tucker starts to name the name, then we will see how long he is allowed on the air.
Posted by Arthur Sido at 11:27 AM