In The Blink Of An Eye

Various forms of black on White violent crime are so common that they have become little other than background noise. It takes something especially weird and/or awful to catch my attention these days. Like this local incident for example.
Some Dutch soldiers were in Indianapolis for whatever reason and in the wee hours of the morning, after what I assume was an evening of libations and frivolity, when they came across some of the locals. A scuffle ensued and one of the Dutch guys named Simmie Poetsema ended up dead via a gunshot to the back of his head. Mr. Poetsema... 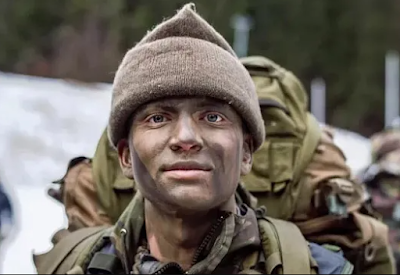 The police have made an arrest, a 22 year old physicist/philanthropist named Shamar Duncan. 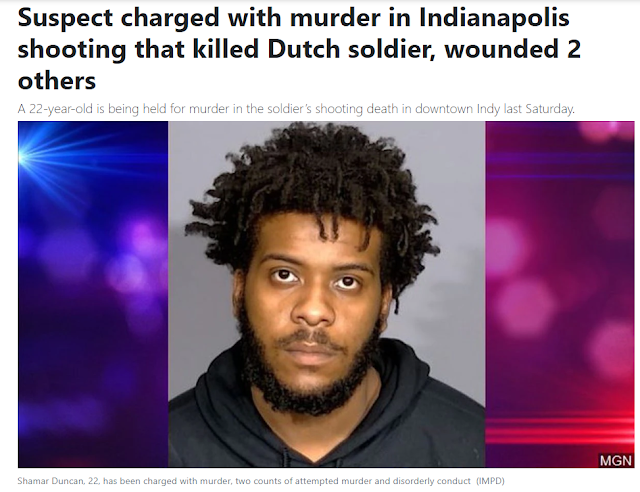 I guess no one told the Dutch soldiers about that relaxing thing.
More details have come out. From an Indianapolis Star story:
An altercation between Duncan and two of his friends and the group of Dutch soldiers preceded the shooting, investigators said.
As they walked back to their hotel after a night out in downtown Indianapolis, the group of Dutch soldiers may have been antagonized by Duncan’s group. Duncan’s group was "looking for trouble,” a witness not tied to either group told police.
The witness watched as Duncan’s group crossed Meridian Street near the IndyStar building and shoved a man in one group, which walked away. Duncan’s group then got into a second altercation, this one with Poetsema and the other Dutch soldiers.
One of the men in Duncan's group stated, “I’m going to go get a strap” after someone in their group got knocked to the ground, the witness told investigators.
The two groups separated with Duncan and his friends going to their pickup and the Dutch soldiers walking to the front of their hotel. The pickup started to drive off then made a U-turn in front of the IndyStar building, accelerated to the front of the hotel and turned on its flashers.
The witness heard gunshots then saw the pickup speed north on Meridian Street, he told police.
Let's walk through this. Three Dutch soldiers are out for a night on the town when they encounter Shamar Duncan and two of this friends. Notice we seem to have an equal number on both sides, Shamar plus two homies and three Dutch soldiers. Equal numbers and the Dutch soldiers were young, presumably fit men (Simmie Poetsema was 26). Shamar and his boyz "antagonized" the Dutch soldiers and a scuffle started, apparently ending when one of Shamar's thug buddies was knocked to the ground.
See, in a fair fight between equivalent groups you might end up getting your ass kicked and that explains why the brothers like the "knock-out game", attacking lone Whites, hitting women and little Asians and old people that can't fight back. Fair fights are not fun and you almost never see them between blacks and Whites. The Dutch guys were part of the Dutch Commando Corps and Poetsema is seen in photos from Kabul so I assume they have had some extensive training in hand to hand combat. Shamar and his buddies assumed they were up against three typical cucked White guys who were trained to not fight back against black but they were wrong.
In better times, this wasn't all that uncommon. Young men go out, have some drinks and maybe get into a fight to blow off steam. How many country songs feature bar fights? In the old America decried by PedoPalpatine Biden, these fights typically ended with someone getting their ass kicked and everyone else moving on. But we don't live in that old, awful America. In the new America, people like Shamar Duncan and his buddies lose a fight and instead go back, get in their vehicle and then shoot someone like Simmie Poetsema, who I assume was unarmed, in the back of the head.
Typical fucking cowards. Can't win a fair fight so they go get guns, rush back up on these guys and shoot them when they were facing away.
Shamar Duncan is now looking at life in the slammer and at age 22 that could easily be half a century of watching TV and lifting weights at Hoosier taxpayer expense. His buddies will probably get significant sentences as well.
Meanwhile Simmie Poetsema and his two buddies learned a valuable, if costly, lesson that most American Whites already understand:
Around blacks you can never, ever relax.
Posted by Arthur Sido at 9:48 AM