In a move that has been anticipated for several days, Russia announced a "partial mobilization" of 300,000 troops. 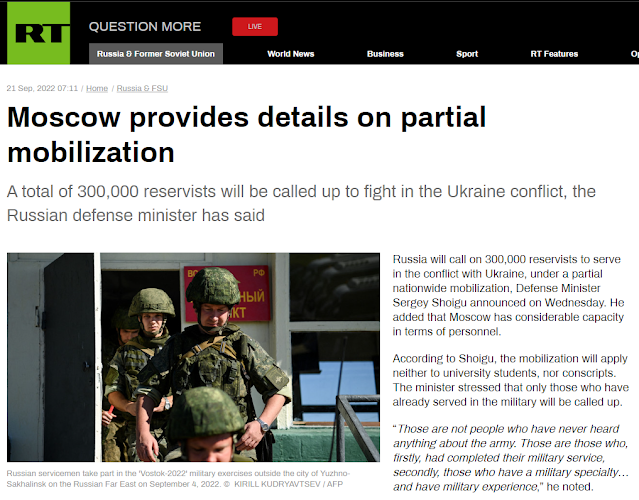 Moscow provides details on partial mobilization
This could be just the beginning.
Shoigu also stressed that Russia possesses an immense mobilization capability and could summon almost 25 million people with some military experience. “So one could say that this partial mobilization is just 1%, or a bit more” of the total number of people that could be mobilized, he added.
The conflict in Ukraine could have and should have ended months ago but the U.S. and our "allies" keep propping up the corrupt regime of Ukrainian President Volodymyr Zelensky.
To Western ears, the idea of calling up 25 million reservists is crazy. Most American normies watch the news and consume the narrative, believing what they are told to believe. This is just a limited conflict by evil Vodka Man Bad and the noble Ukrainians will drive the heathen from their lands and go back to being a poor, corrupt country in no time!
That is not how the Russians see it.
While I am not an expert on Russia, you don't have to be to understand that they see this as part of an existential struggle against a hostile West that in large measure seems to be still fighting the Cold War. It is not just an amusing proxy war but a direct conflict. The average American doesn't see this but the people who keep arming Ukraine and providing indirect (and likely direct) military assistance against Russia certainly understand it. Vladimir Putin declared that the West is trying to destroy Russia.
Putin Announces Partial Mobilization In Ukraine War Escalation, Says West Wants To "Destroy Russia"
He is deadly serious and added this:
Putin also accused the west of using "nuclear blackmail" against Russia noting that "if its territorial integrity is threatened Russia will definitely use all the means at its disposal." to defend Russian territory. "This is not a bluff."
Are you willing to see American cities turned into radioactive rubble so the American military-industrial complex can have a better profit margin? Putin would sooner see the world destroyed than see Russia subjugated by the West and forced into degeneracy.
Adding 300,000 reservists into Ukraine is a huge escalation and it might also mean that the restraint Russia has shown so far is coming to an end. What will this mean for us, how will the West respond? If recent times have taught us anything it is that the people pulling the strings are reckless and sociopathic. Also keep an eye on Taiwan and the recent escalation of tensions in the Pacific. It wouldn't take much to set that off and then all bets are off. Add in rising domestic turmoil and we have the makings of a perfect storm of chaos. At least we can't say we weren't warned.
Posted by Arthur Sido at 9:25 AM