Jared Taylor of American Renaissance interviews a cop about crime among the darker hued folks.
Around the 18 minute mark it really gets to something I have observed. While mestizo gangs are absolutely vicious in their violence and certainly groups like the Italian mafia and Russian organized crime could be ruthlessly violent as well, those are mostly contained within rival gangs. The Mafia didn't generally just gun down a civilian. blacks? The crime is unpredictable and random and, as the cop points out and I keep saying, it targets the weakest and the most vulnerable: the elderly, smaller people, women, lone individuals. Not to mention that black violence often not only targets the weak and vulnerable but also frequently sees innocents caught in the crossfire, like Devin "Boom" McGregor, a five year old black boy who was shot while in the car with his father. He later died as a result of his wounds. 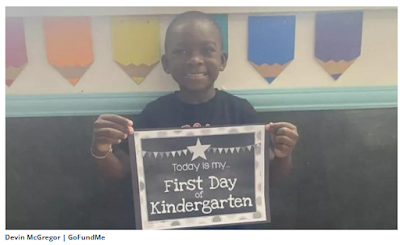 It is not mentioned but it is fair to assume that Devin's father was into some shady black criminal shit as it sounds targeted or at least he pissed some other blacks off. This seems to be confirmed per the Chicago Sun-Times:
Supt. David Brown told reporters Monday morning that investigators suspect the boy’s father was the intended target but he gave no motive for the attack and reported no leads.
No leads? What a shocker. It is likely this boy's father will seek vengeance on whoever shot him and the odds are pretty decent that more by-standers will get shot in the retaliatory strike. Same article mentions that two other small children, a six year old girl and a 7 year old boy were also shot in the last week, both apparently while someone else was being targeted.
I can't imagine being a cop who has to deal with these animals being vicious to each other while hurting and killing other people without any apparent regard for the carnage they cause, day in and day out. No wonder they snap or get caught (and then fired) for saying nigger on a hot mike like (former) Cincinnati police Rose Valentino:
Cincinnati Police Officer Who Was Featured on TLC Reality Show Fired for Using Racial Slur
A Black male student walking past Valentino, a 14-year veteran, allegedly stuck up his middle finger at her. She later told investigators that that is what caused her to lose control and go into a profanity-laden rant.
"I f---ing hate them," she can be heard saying on the body cam footage. "Oh, I f---ing hate them so much. F---ing God. I hate this f---ing world. F---ing hate it."
Valentino then said, "F---ing n-----s. I f---ing hate them."
How can you be unaffected by 14 years of seeing the worst of humanity every day? Decent humans in  the police force are leaving urban police force, leaving these departments hollowed out with nothing but terrible people wearing badges and carrying guns. Are things going to get better?
Obviously not.
Like Ol' Remus used to say: stay out of cities and avoid crowds, especially crowds with more than zero blacks.
Posted by Arthur Sido at 3:21 PM