It is fascinating to watch the globalist mouthpiece apparatus shift in concert on issues. With the war in Ukraine likely heading toward the inevitable conclusion, the globalists are tossing the Ukrainians aside. CBS news recently ran this: 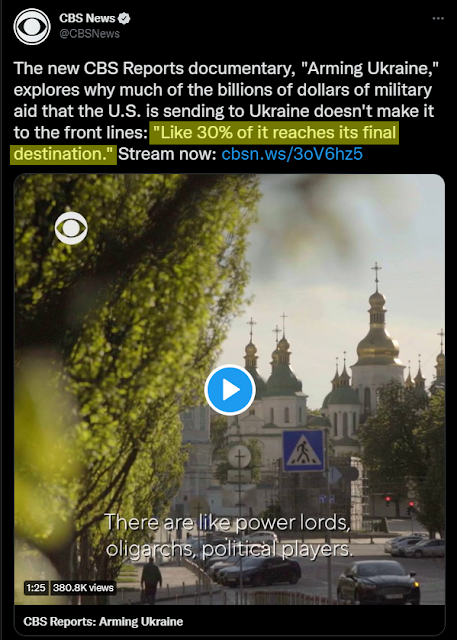 You read that right.

Now the media is noticing that, hey maybe sending billions of dollars in aid and billions in high tech weaponry into the most corrupt nation in Europe with no way of knowing where it goes is a bad idea? From the video page:
Flooding a country with advanced weapons can have grave consequences, even when done with the best of intentions. This CBS Reports documentary goes inside Ukraine to get a firsthand look at how military aid gets from the border to frontline soldiers, and explores the difficulties of getting the aid to the fighters who need it.
How could anyone have seen that coming?!
I like at around 6:40 when a woman who doesn't give her name is just handed over a bunch of body army, drones and night vision optics along a street. How do these supplies get to the Ukrainian forces? Who is making sure that this super sketchy looking chick isn't just selling this shit on the black market?
Don't know.
The next segment shows just some legs and bodies in camo in what looks like a industrial park where you would look for the body of a missing woman. Some fat dude in camo and a mask has stacks of weapons around and won't say what kind of unit he is part of. Not sketchy at all, he def is not a black market gun runner. WTF. Stacks of body armor, machine guns, rocket launchers, all sorts of shit and no one seems to know who this guy is. At one point you see a flag on the wall while he shows the correspondent a loaded grenade launcher. That ain't the Ukrainian flag so who has a flag with yellow, black and red stripes in that order? The only one I found was the short lived "Transcaucasian Federation" in what is now Georgia, Armenia, and Azerbaijan. Those are stable regions. Why does this "Ukrainian" patriot have some random flag that is not the Ukrainian flag in his not sketchy little arms depot?
Don't know.
Billions and billions transferred to a black market black hole. It would be the shock of a lifetime if some of those weapons aren't used against our forces or our civilians in the near future.
Like I said, Ukraine is the grift of the century but maybe with deadly repercussions.
The Grift Of The Century
Like I Said, The Grift Of The Century
The Grift Of The Century Grifts Onward
Posted by Arthur Sido at 10:55 AM

Email ThisBlogThis!Share to TwitterShare to FacebookShare to Pinterest
Labels: grift of the century