A thought experiment.
The future is far from set. /Ourside/ operates under the assumption that we will eventually win in some fashion. You have to think that way, if you assume we are going to lose and there is no hope you might as well self-terminate and get it over with. Yet despite all of our positive thinking, we might still lose.
What if the globalist neo-Bolsheviks succeed in instituting their plan to turn America into a Chinese-style Communist-Capitalist fusion state? What does it actually look like?
China is the model for Them. While the Soviet Union completely imploded, China under Deng Xiaoping did a major revision to their system. The Soviets faced off against the West, but the ChiComs? They tricked the West into funding Chinese Marxism. This was accomplished by providing the West what we wanted, cheap consumer goods produced far away where we wouldn't have to worry about things like environmental damager, working conditions and child labor laws. By buying the American media and political class, China kept those pesky questions at bay and most Americans were happy to get cheap crap with no questions asked.
Now China makes everything we buy, from plastic widgets to high end electronics, textiles to pharmaceuticals. That doesn't make China a capitalist country, it is just a way for China to finance global expansion of their sphere of influence. What does that look like today?
The Chinese social structure looks like a distorted pyramid.
China boasts the second most billionaires in the world, 539 at last count which trails the U.S. by only a couple hundred and is more than triple the next closest country, India. What is worth noticing is the number of billionaires per million people column. 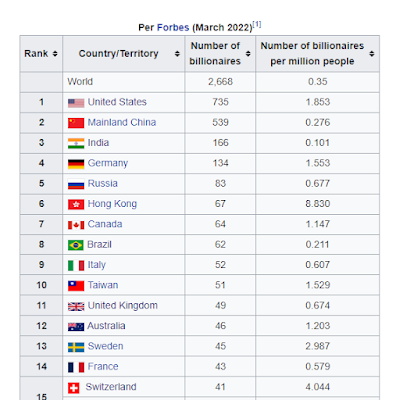 China has lots of billionaires but China also has lots of people, like 1.4 billion of them. In contrast to that population, 539 billionaires is a drop in the bucket.
China also brags about their "middle class" which allegedly numbers around 400 million people. I suspect that this middle class in China doesn't have anywhere near the sort of standard of living that the American middle class has but it probably is better than the quality of life of the vast bulk of Chinese who are virtual slaves, going from a peasant class to a wage slave class, from growing rice at a near subsistence level to making consumer goods for the West, goods they could never hope to own.
One of the main shifts in China has been a forcing of rural Chinese out of their homes and into the cities where they can work as wage slaves making consumer goods. 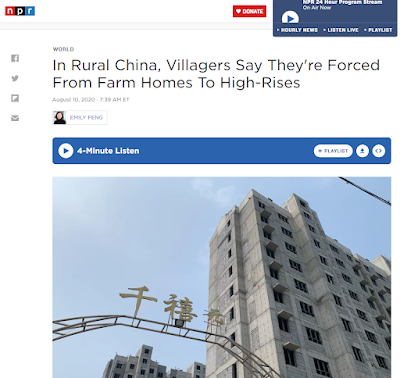 But Liu and other residents allege that the authorities are coercing them into signing away their older, much larger farm homes, demolishing them by force if necessary and not adequately compensating residents for their homes. The residents say the new, smaller houses or high-rise apartments they are being moved into are either too far from their fields, too expensive or ill-suited for their needs as farmers.
"Our leaders have been distanced from us regular people at the bottom. They do not know our basic needs. They are completely cut off from us," Liu said.
Does that last part sound familiar?
China has been systematically emptying out their rural areas, forcing Chinese farmers off the land and into cities, where they live in small, cramped homes instead of on the farms that were likely in the family for generations.
Why do you think there is the push for electric vehicles that have such a limited range and require coal burning to create the electricity to charge them? To force rural Americans into the cities where they are far more dependent and easier to control. It isn't about "the environment" and never was.
China is slightly larger in terms of total land area compared to the United States but the population of China is more than four times more numerous than the U.S., explaining why China's population density is 145 people per square mile (83rd in the world) versus 87/square mile in the U.S. (185th in the world).
Increasing American urbanization is going to leave the already hollowed out rural areas of America even more denuded of people. So what happens to all of that empty land?
It won't go unowned, you can be sure of that.
Last year I wrote Like Feudalism Without The Peasants about the Great Reset plans for you to "own nothing and be happy" and the idea of eliminating the income tax and instead taxing "land value", making it prohibitively expensive to own real estate. I also mentioned that lizard person Bill Gates already is the largest owner of farmland and he hasn't slowed down. From The Epoch Times: 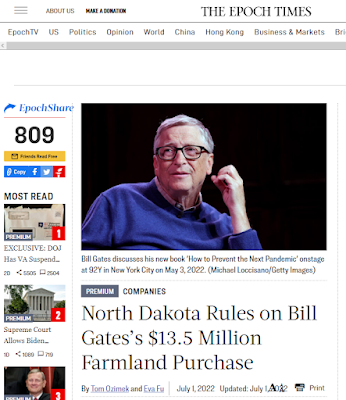 Shockingly they approved his purchase of 2,100 acres. I keep pointing this out, but when the government and oligarchs are buying up farmland, it prices actual farmers out of the market. Around here it is already nearly impossible to buy sufficient farmland to be a full-time farmer unless you already have millions in the bank. Libertarians and capitalism cultist types will tell you this is great because the market is simply setting the price but when Bill Gates buys up farmland as an investment and then presumably leases it back to farmers, it changes rural America. Renting farm ground is not the same as owning your farm ground. Why would your kids want to become farmers when there is no guarantee they can keep renting the same ground? Libertarianism can't really account for cultural and social issues.
Not all of this land being snatched up is even going to be used for farming. Despite dire warnings of food shortage we see this going on (from American Partisan):
Billionaire-funded eco group quietly taking farmland out of production in rural America
The American Prairie (AP), a conservation project in Montana, has quietly scooped up more than 450,000 acres of land with the help of its billionaire donors and the federal government.
The little-known project aims to create the largest “fully functioning ecosystem” in the continental U.S. by stitching together about 3.2 million acres of private and public lands, according to the American Prairie Foundation, which founded the reserve more than 20 years ago. The group has recorded 34 transactions spanning roughly 453,188 acres of land throughout central Montana — much of which were once used for farming and grazing — since 2004 and continues to aggressively expand.
3.2 million acres being removed from food production. How can that go wrong?
What about people who don't want to move into concrete high rise hovels? They are simply going to price you out of the market, tax your land, make it prohibitively expensive to drive and eventually start to straight take your land in the name of "the environment". Choking off communications in the name of "combatting radicalism" and of course disarming the White civilian population are obvious steps they will take to make organized, armed resistance impossible.
The interior of the country apart from the large cities will be owned by huge investment conglomerates and oligarchs, farmed by a few renters who will rely on automation and AI to manage these enormous farms.
This is all part of the society wide reorganization that is taking place as part of the architects of the Great Reset's plan to turn America into a clone of China...
A small elite oligarchy of people with unimaginable wealth
A somewhat larger "middle class" of technocrats and court mandarins working for those oligarchs
An enormous permanent urban underclass that survives at the whim of the oligarchs, dependent on the state for everything from food to housing to transportation.
Keep in mind that the new middle class under the Chinese model won't be like the middle class as we understand it. It won't include entrepreneurs or skilled tradesmen. The middle class will consist almost entirely of the managerial class working in support positions. The cost of admission to this middle class will be a surrender of any semblance of independent thought. This tweet captures it well. 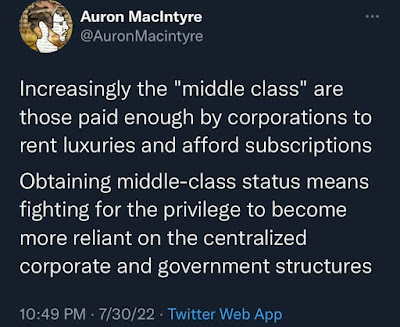 You don't become middle class in China by working hard or having ingenuity, you get there by being willing to do whatever you are told and never, ever stepping out of line. Get jabbed over and over, wear the mask, drive the electric car or take the bus, work from home and never be offline, keep your non-state approved opinions to yourself, sit through the seminars, fly the rainbow flag or bLM banner or whatever else they tell you to do. The Chinese social credit score system is definitely the model They want to impose on us.
Of course as people are silenced and extorted into submission, it will mean that the already tenuous checks on the degeneracy of the ruling class will be dissolved. Public degeneracy that would have been out of line in Weimar Germany will be common place, especially among the elites.

Nothing will be off-limits and no one will have the courage or ability to stop them. Pedophilia will be the next degeneracy to be normalized and it won't stop there.
To keep the population in line, the online world and streaming entertainment will get more vivid and most important become more appealing than the real world. Sure you live in a concrete box surrounded by millions of other people in concrete boxes, miserable and unhealthy, but when you go online? Suddenly you are handsome and strong, exciting and dynamic. You can meet imaginary girls and find an escape from the awful real world existence. I think of all of the dystopian novels out there, Ready Player One is the one most likely to come true, with a mix of 1984 and Brave New World.
The future is pretty grim if They win and being honest there is a decent chance that They do. Our nation will look a lot like Communist China and you will have a choice between trading your soul for a few "luxury" goods and services or becoming a part of the underclass scraping out a meager existence, eating bugs and living in pods with only your online persona to provide any relief.
These are the stakes and they couldn't be much higher.
Posted by Arthur Sido at 11:17 AM