What Will They Do?

Spend any time at all among the public and you start to see a pattern developing. There are a lot of people who are just not going to fare well in a SHTF situation of any sort.
A LOT.
Some are obvious, the elderly being the most prominent. Thanks to modern medicine, people are living much longer. Perhaps I should say "surviving" rather than "living". Having a pulse while laying in your own filth in a nursing home isn't really living. Millions require constant care and survival prolonging medication. Any disruption will lead to a massive culling that will make Andrew Cuomo's mass murder of the elderly in New York look like a day in the park.
It isn't just the elderly, they always suffer along with young children in the worst of times. Thanks to the endless firehose of cheap calories delivered via simple sugars and carbohydrates, tens of millions of Americans are dangerously obese and have chronic health problems at younger ages than in the past. Look at the leading causes of death in America: 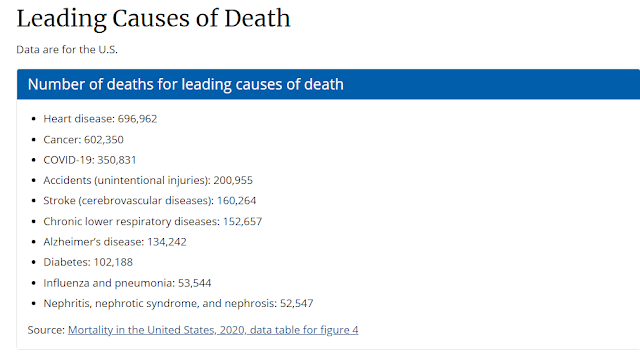 Many of those are directly related to poor diet. Even with the Covid numbers that are pretty obviously bullshit, one of the leading comorbidities that made Covid fatal was obesity. Being fat is right up there with smoking and frequenting hookah lounges as the surest path to an early grave. Oddly enough, while we can tell people ad nauseum that smoking is bad for them, we are supposed to celebrate grossly obese famous people.
It is everywhere you look. Round faced fat women in their 20s and 30s crammed into yoga pants. Men in the same age cohort with double chins, huge bellies and an utter lack of any muscle tone. Most of them tiptoeing around like they are terrified of the world. School aged boys, especially White boys, are often obese and generally soft and timid while school aged girls are flabby lumps wearing pajamas to school. It is rare to see a middle aged White woman who doesn't have a big belly and enormous ass. Lots and lots of people in early adulthood are already dependent on a cornucopia of drugs, mostly "antidepressants" that make you suicidal, especially if you stop taking them cold turkey. I am sure they will do great when the pharmacy runs out of SSRIs.
When people used to ingesting 5000 calories a day in sugars and carbs suddenly have no food? It will be lethal and in a hurry.
Add in the single moms with 2-3 little kids and no baby daddy around. It is all fun and games when they get free food via EBT and the cops keep the animals at bay but if that stops? You are going to find out pretty quickly why so many women in wartime shack up with their occupiers for food and protection. Better stock up on kneepads now.
Things are looking pretty ugly right now as the weather starts to cool. Set aside a "new" Covid variant popping up, many people might be lucky to make it to Spring without freezing or starving to death. Tucker spent a significant amount of time on this last night.
Pretty stark warning. For all of Tucker's faults, he is sounding the alarm that no one else in mainstream "news" is doing.

7 times more expensive. Remember that much of Europe is north of most of the U.S. and it gets plenty cold there. Here at Casa Sido we are heated by propane and electricity, and our propane is amortized out over the year at around $150 per month or $1,800 for the year. If our propane cost was 7 times more expensive? Our cost would be $1,050 per month or $12,600 for the year. By comparison, $1050 is about what we pay monthly for our mortgage, property taxes and home owners insurance. I could swing a grand a month for heating but it would require significant cuts somewhere else. A lot of people, and I mean most, would not have the budget to cover energy costs going up by a factor of 7.
It is making people pine for the good old days of bread lines and barbed wire barriers under Communism. 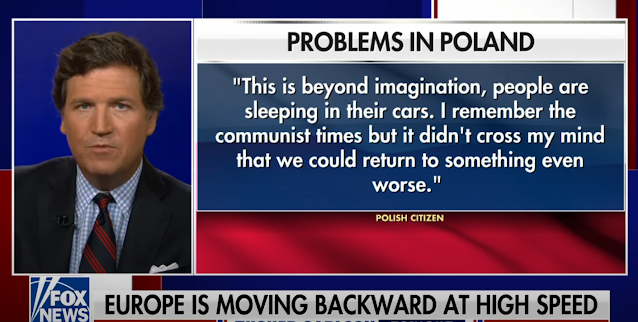 Things in Poland are going to get rough....
"This Is Beyond Imagination": Polish Homeowners Line Up For Days To Buy Coal Ahead Of Winter
According to Reuters, with Poland still basking in the late summer heat, hundreds of cars and trucks have already lined up at the Lubelski Wegiel Bogdanka coal mine, as householders fearful of winter shortages wait for days and nights to stock up on heating fuel ahead of the coming cold winter in queues reminiscent of communist times.
Artur, 57, a pensioner, drove up from Swidnik, some 30 km (18 miles) from the mine in eastern Poland on Tuesday, hoping to buy several tonnes of coal for himself and his family.
"Toilets were put up today, but there's no running water," he said, after three nights of sleeping in his small red hatchback in a crawling queue of trucks, tractors towing trailers and private cars. "This is beyond imagination, people are sleeping in their cars. I remember the communist times but it didn't cross my mind that we could return to something even worse."
If I didn't know better, I might think that this is intentional. Make things so bad that people wish for something, anything, to relieve the misery, even Communism. I really enjoyed the clip of Trump warning them exactly what was going to happen and the German delegation snickering at Orange Man Bad. We will see how much they laugh when people are without food and heat this winter. It will probably be OK, as I pointed out on Twitter. 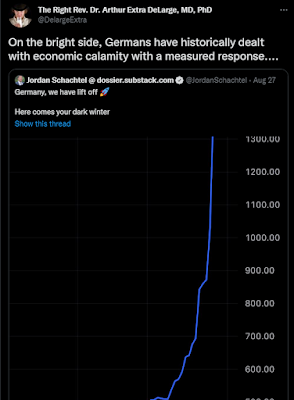 Remember when Pedo Joe said this last December?
"I want to send a direct message to the American people: Due to the steps we've taken Omicron has not yet spread as fast as it would have otherwise done. But it's here now and it's spreading and it's gonna increase. ... We are looking at a winter of severe illness and death for the unvaccinated -- for themselves, their families and the hospitals they'll soon overwhelm. But there's good news: If you're vaccinated and you have your booster shot, you're protected from severe illness and death."
He was a year early when declaring the Winter Of Severe Illness And Death™. But it is coming, maybe not this winter but soon.
This is what I keep saying about The Great Reset, something that radical will require a massive collapse to make any alternative seem better in comparison. Those Normiecons in the suburbs swearing they ain't gonna eat no bugs? Well when they haven't eaten anything for a week and their kids are dying you can be sure as shit they will eat the bug paste and wash it down with cockroach milk. Almost none of them have any plan other saying "No I won't do X".
So the answer to my question, what will they do? Those old people and the single moms and the obese wine aunties addicted to antidepressants and mocha lattes?
They will die. Not quietly in their sleep, they will die horrible deaths of starvation and violence. Their deaths will not be lamented by the architects of our destruction, instead they will be celebrated, first quietly and later loudly. Broken eggs and omelets dontcha know. This is all part of the plan to reduce the global population to a more easily manageable (iow ruled) size.
There have never been as many humans as we have on the planet right now and that means that the global calamity is going to be on a scale never before seen. Buckle up, we are going to see it happening in real-time.
Posted by Arthur Sido at 10:46 AM